(Former President of the Confederate States of America)
Advanced Search

Jefferson Finis Davis was famous for being the first and only President of the Confederate States. He is also remembered for his invaluable contribution to the Army of the United States, as a soldier, the Senator of Mississippi, and the Secretary of War. A member of the 'Democratic Party', he gained popularity as a political leader, serving the government as a presidential elector, and a 'Member of the U.S. House of Representatives', before being appointed in higher positions. For a brief period of time, he also looked after his plantation in Brierfield, where he owned more than 100 slaves. He had earned a reputation of being a slave trade supporter, and protested against any measure taken to grant slaves their freedom. When a group of states decided to form a Confederacy by separating from the United States of America, Jefferson was a unanimous choice for the post of President. This step was taken during the American Civil War, waged against Abraham Lincoln for the policies he was trying to implement. However, once Lincoln was assassinated, the Confederate President was arrested, and his government, came crashing down. At the age of 82, this politician succumbed to serious physical ailments, breathing his last in city of New Orleans, Louisiana
Continue Reading Below American People
American Men
United States Military Academy
Male Leaders
Gemini Leaders
Childhood & Early Life
Jefferson Finis Davis was born to Samuel Emory and Jane Cook, on June 3, 1808, in Fairview, Kentucky. The family moved to and settled down in the Wilkinson County of Mississippi, where the child pursued his education.
He first went to the Wilkinson Academy, in Mississippi, and later the ‘Catholic school of Saint Thomas’ near Kentucky. In 1818, he attended the ‘Jefferson College’, and after graduating, enrolled at Lexington's 'Transylvania University'.
Towards the end of 1824, he joined the 'United States Military Academy', known popularly as 'West Point'. 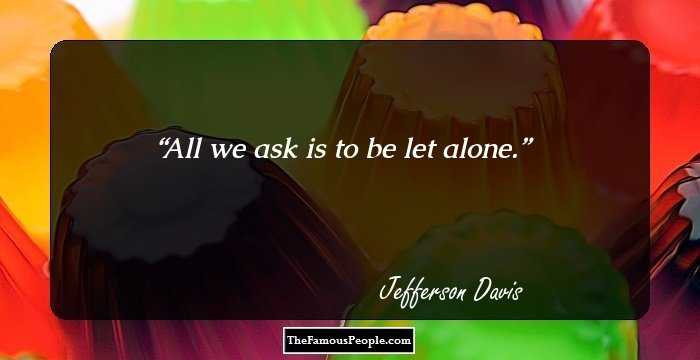 The Best Black Actresses Of All Time
Career
After completing college, Davis began serving at 'Fort Crawford's '1st Infantry Regiment', in Wisconsin, under the leadership of General Zachary Taylor.
In 1832, Jefferson moved to Mississippi, and when the 'Black Hawk War' took place, he was given the responsibility of taking the Native American chief, Black Hawk, to jail.
Three years later, on April 20, the young army official resigned from his post as Second Lieutenant. Following his resignation, he oversaw his estate at Brierfield, and being an advocate of bonded labour, kept increasing the count of slaves he owned.
In 1840, he joined the 'Democratic Party', and was selected as one of the attendees of the political faction's meeting in Jackson, the capital of Mississippi. Two years later, he spoke at the convention, and subsequently contested in the election to the House of Representatives, in which he was defeated.
Having attended the third conference of the 'Democratic Party', he established himself as an able political leader, and was appointed as a presidential elector in 1844. In this capacity, he supported James K. Polk, the candidate representing the 'Democratic Party'.
In 1845, Davis was chosen as a 'Member of the U.S. House of Representatives', representing the Mississippi district. The next year, he gave up the post in order to serve in the army during the 'Mexican–American War', once again under the leadership of General Taylor.
Placing a special requisition for guns, his regiment became the first to use the new arms, thus earning itself the name, 'Mississippi Rifles'. From 1846-47, Jefferson was a part of major conflicts like the ‘Battle of Monterrey' and the 'Battle of Buena Vista'.
Towards the end of 1847, this brave colonel was made the United States Senator, as a replacement for the recently deceased Jesse Speight. The following year, in January, his position was made permanent, and his term lasted for two years.
In December, 1848, he was appointed as the member of the 'Military Affairs and the Library Committee' of the 'Smithsonian Institution', affiliated to the Government of the United States.
Continue Reading Below
The newly appointed Senator, Jefferson, was in favour of seizing Mexico as a part of America, and to further this cause he suggested a rectification be made in the 'Treaty of Guadalupe Hidalgo'. This suggestion made in 1848, however, failed to impress others, and was eventually rejected on a majority poll.
In 1849, Davis became the chairman of the 'Committee on Military Affairs', with a term fixed at six years.
The next year, the 'Compromise of 1850' came into existence, abolishing the practice of slave trade in several regions, and also granting freedom to many states.
A staunch believer of White supremacy over Blacks, in September, 1851, Davis wished to protest against the implementation of the 'Compromise'. He stood as a candidate for governorship, but lost out to colleague, Senator Henry Stuart Foote.
From 1853-57, he was appointed as the U.S. Secretary of War, and the Senator, by the newly elected President Franklin Pierce. As the Secretary of War and Senator, Jefferson took several significant measures to improve transport, connectivity, and the conditions of soldiers.
After the end of Pierce's presidential term, Davis was re-elected as the US Senator, in 1857, under the presidency of James Buchanan. During this time, he fell ill, and had to be confined for a month in a dark room, in Portland.
With the appointment of Abraham Lincoln as the US President in 1860, certain states decided to separate from America. They formed their own group of nations with an individual government, called the Confederate States of America, and Davis stepped down from his post as Senator.
Towards the beginning of the 'American Civil War', which followed the formation of the Confederate States of America, in 1861, Jefferson became a major general for the Mississippi Army. He was soon elected the President of the Confederate, with Alexander Stephens serving as his deputy.
Soon Virginia became a part of the Confederacy, and the government shifted to Richmond, in 1861. The same year, Davis' term of presidency was fixed at six years.
Continue Reading Below
In 1865, much to the disdain of the Confederate President, it was decided as per the 'General Order 14', that slaves were to be granted freedom, and they would be employed in the army.
On April 15, 1865, Lincoln succumbed to an assassination attempt, and was succeeded by Andrew Johnson. President Johnson got Jefferson arrested on charges of having planned the assassination of Lincoln.
Davis was taken into custody, and kept in a prison at the 'Fortress Monroe', located in Virginia. He was bound in chains, and was not allowed to see anyone, having only his Bible to give him company.
Two years later, Davis was let out on bail, after which he settled down in Lennoxville, Quebec. In 1868, he was granted an official pardon by President Johnson, following which he was made the head of the 'Carolina Life Insurance Company' in Tennessee. 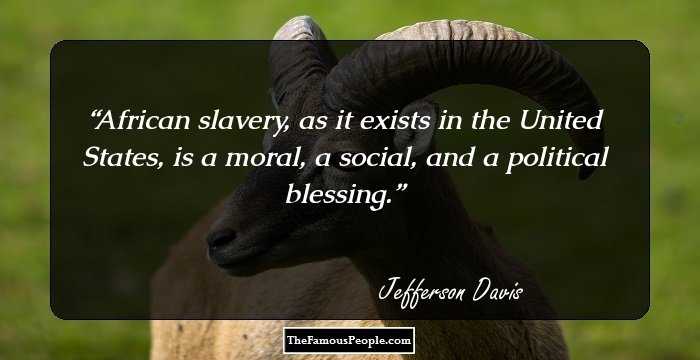 Major Works
As the US Senator and Secretary of War, Jefferson ensured that new routes were ascertained for building the 'Transcontinental Railroad'. He also ensured that a part of Arizona, in Mexico, was bought as a more convenient rail route.
Apart from helping improve connectivity, he also ensured that soldiers got a remuneration increase, a measure that hadn't been taken for more than 25 years. This also helped increase the number of people who voluntarily joined the army, to serve their nation.
Personal Life & Legacy
Davis was smitten by his commanding general, Zachary Taylor's daughter, Sarah. The couple got married on June 17, 1835, against Taylor's wishes, and after that the young soldier resigned from the army the same year.
A few months after marriage, Sarah contracted a deadly disease, suspected to be either yellow fever or malaria, succumbed to her illness, and died.
In 1844, Governor Richard Howell's granddaughter, Varina Banks, caught the eye of the thirty-five year old Jefferson, and both of them got married in the month of February the following year. They had six children, of whom only three lived till they grew up.
This astute politician passed away on December 6, 1889, in Louisiana, having been afflicted by malaria and bronchitis. He was initially buried at the 'Metairie Cemetery', New Orleans, but was later moved to the 'Hollywood Cemetery' in Richmond, where his grave lies beneath his statue.
Several forts, mountains, and other areas have been named after this renowned political leader, including the Jeff Davis County. A highway commissioned by the organization, 'United Daughters of the Confederacy', has also been named to commemorate him.
In 1998, the 'Jefferson Davis Presidential Library' was built and named in the brilliant politician's honour. 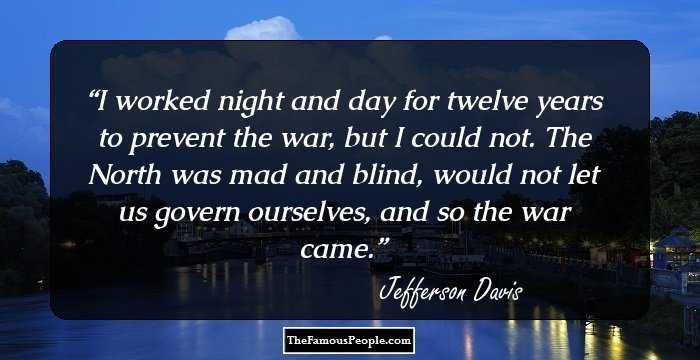 Quotes By Jefferson Davis | Quote Of The Day | Top 100 Quotes

See the events in life of Jefferson Davis in Chronological Order