Jane Addams was a renowned social activist and pacifist, who co-founded a settlement named Hull House in Chicago. Her father, being a state senator himself was an influential personality and knew many illustrious people like Abraham Lincoln. She was also a pioneer in women’s suffrage movement and fought for a number of cause involving women and children. This public philosopher was hailed as the nation’s mother, who also toiled for world peace. For her extensive contribution to the global society at large, Addams was awarded the Nobel Peace Prize, and was the first American woman to have received this award. Apart from this, Addams and her friend documented social illnesses such as typhoid and tried to alleviate the sufferings of poor who were affected more by the disease due to inadequate sanitation and hygiene. She appealed to the women from the middle-class for what she termed “civic housekeeping”. This inspiring settlement worker contracted Potts’ Disease when she was four, so she was plagued with health problems throughout her life. She suffered a heart attack in her final years, after which her health steadily began to deteriorate. This celebrated peace lover breathed her last in Illinois. Read on to know more about this inspirational social worker and political campaigner’s life and career. Rosario Dawson
6th September In History
DID WE MISS SOMEONE?
CLICK HERE AND TELL US
WE'LL MAKE SURE
THEY'RE HERE A.S.A.P
Quick Facts

American Celebrities
Social Reformers
Political Activists
American Women
Women Activists
Childhood & Early Life
Jane Addams, also known as Laura Jane Addams was born to John Huey Addams and Sarah Addams in Illinois. She had eight siblings.
As a child, she went to Sunday school and spent most of her time playing and reading. This political activist was also an avid reader.
She was affected by tuberculosis of the spine when she was four. As a result, she developed a curve in her spine, and consequent lifelong health problems.
In 1881, she obtained a collegiate certificate from the Rockford Female Seminary in Rockford, Illinois.
She finished her first year in medicine from the Woman’s Medical College of Philadelphia, but, she had to discontinue her education because of her illness and a nervous breakdown. 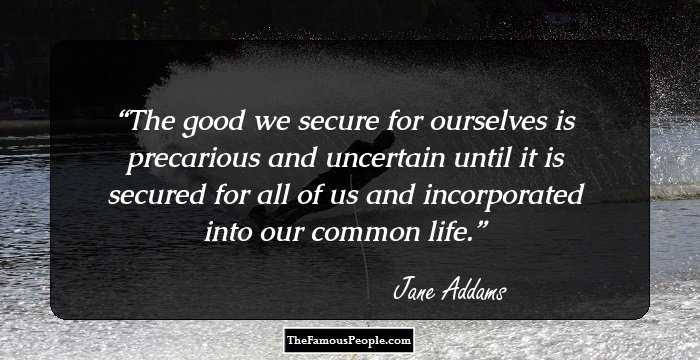 Quotes: Life
Continue Reading Below
Career
In 1883, Jane Addams left for a tour to Europe along with her stepmother for a period of two years.
It was in the summer of 1887 that she heard about a settlement house named Toynbee Hall in London, the first of its kind in the world. During her second trip to Europe, she visited Toynbee Hall along with her close friend Ellen Gates Starr.
Addams and Starr together founded the first settlement house in the United States, named Hull House in 1889. It was located in Chicago, Illinois, and initially housed only Addams and Starr. Later, about 25 women made it their residence, and close to two thousand people visited it weekly when the settlement was at its peak.
In the Hull House, there were kindergarten classes, a public kitchen, an art gallery, a coffeehouse, a gym, a book bindery, a bathhouse, a music school, a girls' club, a drama group and a library. In addition to these, there were also clubs for older children and labour-related divisions.
In 1905, this able activist joined Chicago’s Board of Education. Subsequently, she presided over the board’s School Management Committee.
In 1911, Addams took on the task of establishing the National Federation of Settlements and held on to its top-most post for over two decades.
With the beginning of the First World War, the social cum political activist was made the national chairman of the Women’s Peace Party.
In 1915, she was also made president of the Women's International League for Peace and Freedom and had to travel frequently to Europe and Asia.
She joined the Fellowship of Reconciliation USA as member in 1917. Addams lectured at various college campuses, all over the country. She also offered college courses through the University of Chicago’s Extension Division.
Continue Reading Below 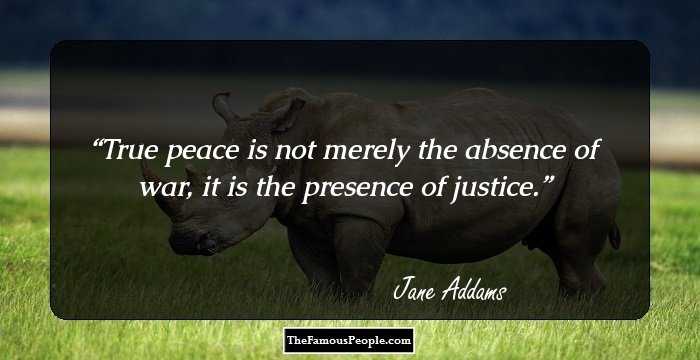 Quotes: War, Peace
Major Works
Jane Addams offered night schools for adults in the Hull House. This inspired many universities that offer continuing education nowadays.
She always advocated peace and spoke extensively on the subject of world peace. She published a collection of her speeches on world peace in her book “Newer Ideals of Peace” in the year 1907.
In 1910, the dedicated activist was elected as the first female president of the National Conference of Charities and Corrections.
Awards & Achievements
Jane Addams was jointly awarded the prestigious Nobel Peace Prize in 1931, for her efforts and contributions to bring out the role of women in peace-keeping. The staunch lover of peace donated her prize money to the Women's International League for Peace and Freedom. 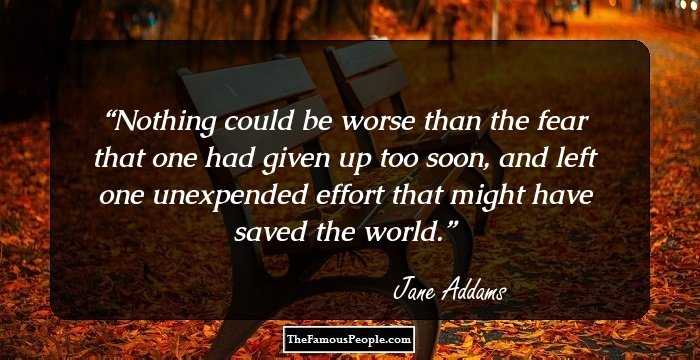 Quotes: Fear
Personal Life & Legacy
Jane Addams did not marry, and dedicated her entire life to social causes. However, she is said to have shared a romantic friendship with Mary Rozet Smith.
The renowned activist had suffered a heart attack in 1926, after which her health gradually declined. She passed away at the age of 74.
Today, only a few buildings of the original Hull House remain intact. However, it continues to act as a monument to honour Jane Addams’ contribution to the society and world peace.
Trivia
This talented political activist’s father was a well-known businessman and the President of The Second National Bank of Freeport. He also founded the Illinois Republican Party, and between 1855 and 1870, he was the Illinois State Senator.
This social activist became the first American woman to be awarded the Nobel Peace Prize.
Recommended Lists:
Activists #202

Quotes By Jane Addams | Quote Of The Day | Top 100 Quotes

See the events in life of Jane Addams in Chronological Order