James Dewey Watson is an American molecular biologist, geneticist and zoologist. He is credited for co-discovering the molecular structure of deoxyribonucleic acid (DNA), a substance that is the basis of heredity. His discovery has been described by other biologists and Nobel laureates as the most important scientific discovery of the 20th century. He was born in Illinois to James D. Watson and Jean Mitchell. Growing up, James Dewey Watson spent hours bird-watching and decided to major in ornithology but Erwin Schrodinger’s book titled ‘What is Life’ had such a profound impact on him that he chose genetics in the end. He received his B.S. degree from the University of Chicago, and his PhD from Indiana University. He was strongly opposed to the belief that genes were proteins that could replicate and DNA was a simple tetranucleotide that supported the genes. James’ perception, influenced by the discoveries and lectures of that time, was that DNA was indeed the genetic molecule. He finally found success with Francis Crick and Maurice Wilkins, when the trio discovered the double helix structure of the DNA molecule. For this discovery James Dewey Watson, Francis Crick and Maurice Wilkins earned the Nobel Prize for Physiology or Medicine in 1962 Caroline Kennedy
6th April In History
DID WE MISS SOMEONE?
CLICK HERE AND TELL US
WE'LL MAKE SURE
THEY'RE HERE A.S.A.P
Quick Facts

discoveries/inventions: Discovery Of The Structure Of DNA, Which Was Published In 1968

American People
Physicians
Geneticists
Non-Fiction Writers
Molecular Biologists
Childhood & Early Life
James Watson was born on April 6, 1928 in Chicago, Illinois. His father, James D. Watson was a businessman and his mother’s name was Jean Mitchell.
He attended Horace Mann Grammar School for eight years and South Shore High School for two years. For further education he went to the University of Chicago on a tuition scholarship in 1943.
He graduated from Chicago University with a B. S. degree in Zoology in 1947. He could pursue his dream of studying genetics when Indiana University awarded him a fellowship.
He did his PhD research at Salvador Luria’s (also his doctoral advisor) laboratory. Luria was one of the leaders of the new Phage group, a movement of geneticists from experiential system to microbial genetics.
In those times the prevalent notion was that genes were proteins which could replicate and DNA was the structure that supported it. However, Avery-Macleod-McCarty’s experiment led Watson to believe that DNA was indeed the genetic molecule.
His doctoral thesis was on the effect of hard X-rays on bacteriophage multiplication, inspired from geneticists H. J. Muller and T. M. Sonneborn and microbiologist Max Delbruck. He graduated with a PhD in Zoology in 1950.
For his post doctoral research he went to Copenhagen University for a year to work with biochemist Herman Kalckar at his laboratory. But as the field of interest differed for both, Watson shifted his workplace after some months.
His new partner was microbial physiologist Ole Maaloe and they did several experiments to explore the structure of the DNA. After much hard work and deliberation they accepted that the result of their first attempt was inconclusive. 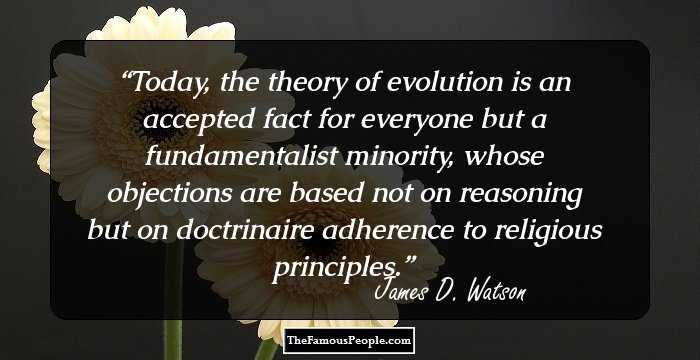 Continue Reading Below
Career
On a trip to Italy James Watson heard about Maurice Wilkins’ X-ray diffraction of DNA and soon Linus Pauling published his model of the amino acid alpha helix in California. These developments further strengthened Watson’s belief.
Watson realized that the understanding and learning of X-ray diffraction was very important to describe the structure of DNA, hence Luria got him a new postdoctoral research project in England where he could do so. In 1951 he visited the Stazione Zoologica ‘Anton Dohrn’ in Naples.
Watson and his partner, Crick, finally deduced the double-helical structure of the DNA in 1953 at the Cavendish Laboratory. The original announcement was made at a conference in Belgium and a paper on the subject was published in the scientific journal ‘Nature’ the same year.
Watson presented a paper on the double-helical structure of DNA at the 18th Cold Spring Harbor Symposium on Viruses in June 1953. Many in the audience hadn’t yet heard of the discovery and most of them saw the model for the first time.
In 1956, he became the assistant professor of biology at Harvard University. He received several promotions over the years to finally become the full professor of biology and remained on the faculty till 1976. His personal research was on RNA (Ribonucleic acid) and its role in the transfer of genetic information.
While at Harvard he penned the textbooks ‘The Molecular Biology of the Gene’, and ‘Recombinant DNA’.
He served as the Cold Spring Harbor Laboratory’s director and president for about 35 years. Later on he went on to become the Chancellor and then the Chancellor Emeritus.
The National Institutes of Health appointed him as the Head of the Human Genome Project in 1990. However, he resigned two years later as he opposed Bernadine Healy’s (then NIH Director) opinion on applying for patents on brain-specific DNA.
He was suspended from Cold Spring Harbor Laboratory (CSHL) following his remarks on race and intelligence in October 2007. A week later, he retired on the claims of old age and unanticipated circumstances. 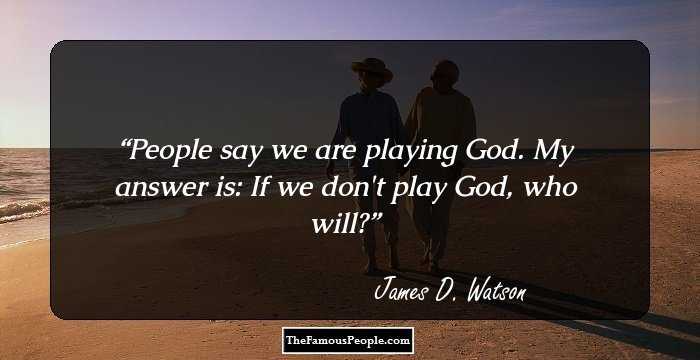 Quotes: God, Will
Major Works
James Dewey Watson co-discovered the double-helical structure of the DNA molecule in 1953. The discovery is considered to be one of the most important discoveries of the 20th century. In 1962, the trio of James Dewey Watson, Francis Crick and Maurice Wilkins received the Nobel Prize in Physiology or Medicine for their discovery.
Awards & Achievements
James Dewey Watson has been honored with several distinguished awards for his tremendous achievements, including the 1962 Nobel Prize for Physiology or Medicine (with Francis Crick and Maurice Wilkins ), John J. Carty Award (1971), Copley Medal (1993) and the Lomonosov Gold Medal (1994). 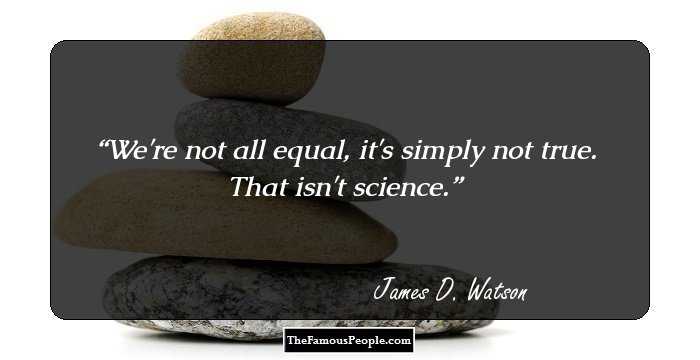 Personal Life & Legacy
James Watson married Elizabeth Lewis in 1968 and together they have two sons, Rufus Robert Watson and Duncan James Watson. Rufus, born in 1970, suffers from schizophrenia.
His memoir, ‘Avoid Boring People: Lessons from a Life in Science’, was published in 2007 and a UK Book Tour was scheduled. However, in an interview he made certain statements on race-and-intelligence that were widely considered insensitive. Following the controversy, he cancelled the rest of the tour.
The 2007 controversy significantly dented Watson’s image and as a result his financial condition became so bad that he had to auction his Nobel Prize medal in 2014. Russian tycoon, Alisher Usmanov, bought it for US $4.1 million and gave the medal back to Watson.
Recommended Lists:
Non-Fiction Writers #31
Scientists #173
Writers #134
Physicians #9

Quotes By James Watson | Quote Of The Day | Top 100 Quotes

See the events in life of James Watson in Chronological Order