James Callaghan, also known as the Baron Callaghan of Cardiff, was the Prime Minister of the United Kingdom from 1976 to 1979. He was also the only person to have occupied the four Great Offices of State—the Exchequer, the Home Office, the Foreign Office and that of the Prime Minister. One of the longest serving members of the House of Commons, he was known to have been an engaging personality and was a political ‘kahuna’. He began his career working as a tax inspector and slowly ascended the political ladder. He donned many roles - a volunteer with the Royal Navy, an Ordinary Seaman, a Lieutenant and then, a politician. During his tenure as the Chancellor of Exchequer, he introduced the important capital gains tax and helped stabilize the financial market in the country. After having faced a tough period during the Middle East crisis, he resigned as the Chancellor and later went on to become the Home Secretary. A strong advocator of the Labour-Trade Union Link, he was appointed as foreign secretary for his adept decision making skills and efficient management. Keir Starmer
Political Leaders #878
Leaders #1193
Continue Reading Below
27th March In History
DID WE MISS SOMEONE?
CLICK HERE AND TELL US
WE'LL MAKE SURE
THEY'RE HERE A.S.A.P
Quick Facts

British Celebrities
British Men
Aries Leaders
Male Leaders
British Leaders
Childhood & Early Life
He was born in Portsmouth, England, to James Callaghan, a Royal Navy Chief Petty Officer and Charlotte Callaghan nee Cundy. He had an older sister, Dorothy Callaghan.
He attended Portsmouth Northern Secondary School and was awarded the Senior Oxford Certificate in 1929. Since he could not afford university education, he sat for the civil service entrance exam.
At the age of 17, he worked as a tax inspector for Inland Revenue for a brief period of time. 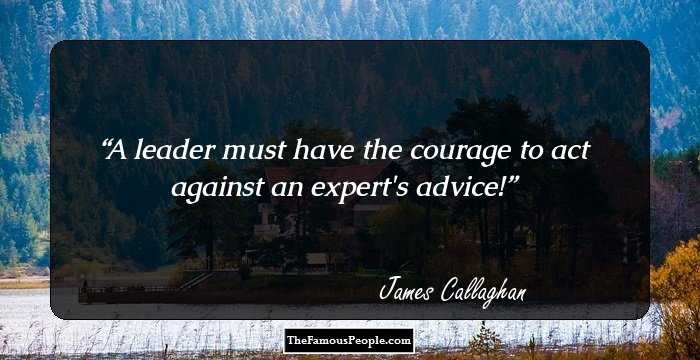 The Sexiest Men Of 2020, Ranked
Career
In 1931, he joined the Labour Party and began to work as a trade union official, quitting his civil service job.
He was then appointed as Assistant Secretary, a full-time official position in 1935. This is where he came in contact with Harold Laski, the Chairman of the Labour Party’s National Executive Committee, who encouraged him to contest for the parliament.
In 1942, he joined Royal Navy Volunteer Reserve as an Ordinary Seaman during World War II, where he served in the East Indies Fleet. He was also promoted to the rank of Lieutenant in 1944, and was soon discharged from the navy after brief illness.
He was elected as the Parliamentary candidate for Cardiff South and won the local party ballot against George Thomas. In 1945, he was elected to the Indian Fleet, where he served on the HMS Queen Elizabeth.
He won a landslide victory on July 26, 1945 in the UK General Election, defeating Sir Arthur Evans by 17,489 votes. After being elected, he advocated a new housing construction program and implemented rapid demobilization.
He was appointed as Parliamentary Secretary to the Ministry of Transport and was also appointed as Parliamentary Adviser to the Police Federation from 1955 to 1960, where he negotiated an increase in police pay.
He was appointed the Home Secretary on November 30, 1967, a position he held till June 19, 1970. He passed the Race Relations Act the same year and dealt with trade unions who registered complaints regarding discrimination.
He was appointed as Shadow Foreign Secretary on April 19, 1972 and held the position till February 28, 1974. During his term as the Foreign Secretary, he played an important role in negotiating the terms of the UK membership with the Common Market.
On April 5, 1976, he was appointed the Prime Minister of the UK at the age of 64 and became the oldest person to become prime minister after Winston Churchill. He was also the only person to have served 3 important Cabinet positions.
Continue Reading Below
He resigned as the leader of the Labor Party on October 15, 1980 and founded the AEI World Forum along with Gerald Ford the same year.
Major Works
Callaghan dealt with long-term economic difficulties in the UK with great virtuosity. The pay restraint and control in public expenditure, which led to the smooth running of the country with reasonable success, can be attributed to him.
After he was appointed the Prime Minister, he negotiated the terms of Britain’s membership in the Common Market and supported a ‘yes’ vote in the 1975 referendum.
Awards & Achievements
He was awarded an honorary degree from the Open University in July 1996.
He was the only Prime Minister to have served the three great Offices of State.
Personal Life & Legacy
In his spare time, he would often play rugby and tennis. He was also a great nature enthusiast.
He married Audrey Elizabeth Moulton in 1938 and they had three children.
His autobiography titled, ‘Time and Chance’, was published in 1987.
He passed away on March 26, 2005 of lobar pneumonia, kidney and cardiac failure. His ashes were scattered near the Peter Pan statue in London.
His name finds mention in the song, ‘Time for Truth’. The ‘Callaghan Library’ at Ruskin College in Oxford has been named after him.
Trivia
This former Prime Minister sang an old-music hall song to the TUC in 1978.
This former British Prime Minister was married to his wife for 67 years, who passed away only 11 days before him.
You May Like

See the events in life of James Callaghan in Chronological Order