Advanced Search
J.B. Priestley was one of England’s most prolific writers, who led a very interesting life. He was a member of the last cohort of nonconformist writers who envisaged both science and philosophy in their large repertoire of works. Even though his name may have waned over time, his works are still looked up to by a number of free-thinking authors, essayists, scientists and philosophers today. In his long and successful career, he became renowned around the world as a playwright, critic and historian. He also made many contributions in the form of opera librettos, paintings, short stories and even as an actor, when one of the actors in one of his plays fell suddenly ill. In his earlier years, he would spend whatever little money he earned on buying books and tried his hand at different styles of writing. He also briefly volunteered for the army during World War I, after which he established a reputation as an amusing writer and critic. Some of his best-known works include ‘The Good Companions’, ‘Angel Pavement’ and ‘Let the People Sing’ and plays like ‘An Inspector Calls’, ‘Dangerous Corner’ and ‘Time and the Conways’. Ian Fleming
DID WE MISS SOMEONE?
CLICK HERE AND TELL US
WE'LL MAKE SURE
THEY'RE HERE A.S.A.P
Quick Facts

Quotes By J. B. Priestley Novelists

British Celebrities
Playwrights
British Men
Male Writers
Virgo Writers
Childhood & Early Life
John Boynton Priestley was born in a suburb of Bradford, England. When he was just two-years-old, his mother passed away and four years later, his father remarried.
He studied at Belle Vue Grammar School, but dropped out of the institution at the age of 16 so that he could work as a junior clerk at ‘Helm & Co.’, a wool firm. He worked at the firm from 1910 to 1914, during which he also began writing short articles and got them published in local newspapers. 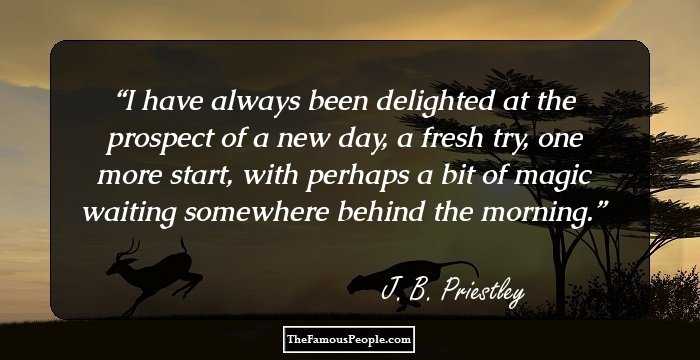 Quotes: I
Continue Reading Below
Career
At the start of World War I, he enlisted in the army and served in the 10th Battalion, the Duke of Wellington’s Regiment. In 1916, he was severely wounded, experiences of which he wrote in ‘Margin Released’, his autobiography; which released much later.
After military service, he completed his university education at Trinity Hall, Cambridge and wrote his first novel, ‘Adam in Moonshine’, in 1927. This was followed by another novel next year titled, ‘Benighted’.
He achieved a breakthrough with the novel, ‘The Good Companions’ which he published in 1929. He earned the prestigious James Tait Black Memorial Prize award for the novel and it immediately catapulted him to national success. The same year, he collaborated with Hugh Walpole and wrote ‘Farthing Hall.
In 1930, he wrote the novel, ‘Angel Pavement’, which further cemented his place among the literary elite. Other fiction this year included ‘The Town Major of Miraucourt’.
In 1932, he published ‘Stamboul Train’ and ‘Faraway’. The same year, he collaborated with Gerald Bullett and published ‘I’ll Tell You Everything’. Apart from writing novels and fiction, he also wrote his first play, ‘Dangerous Corner’.
He wrote his second play, ‘Laburnum Grove’ in 1933 along with the novels, ‘Albert Goes Through’ and ‘Wonder Hero’. The next year proved to be an extremely fruitful one for him, and he published his first travelogue ‘English Journey’.
Between 1935 and 1938, he published the novels, ‘They Walk in the City’ and ‘The Doomsday Men’. He also wrote the plays, ‘Cornelius’, ‘Time and the Conways’, ‘I Have been Here Before’ and ‘When We Are Married’.
At the start of World War II, he became a regular broadcaster on the ‘Postscript’ which aired on BBC from 1940 to 1941. During this time, he chaired the 1941 Committee and the next year, he became a co-founder of the socialist ‘Common Wealth Party’.
His written works from 1942 to 1945 were limited to one publication a year. These include: ‘Blackout in Gretley’, ‘Daylight on Saturday’ and ‘Three Men in New Suits’. In 1946, he wrote one of his best-known plays, ‘An Inspector Calls’.
Continue Reading Below
Other works during the 1940s include, ‘Bright Day’ (1946), ‘Jenny Villiers’ (1947) and ‘The Linden Tree’ (1947).
From 1950 onwards, his literary output started to decline and he produced only three novels including, ‘Festival at Farbridge’, ‘Low Notes on a High Level’ and ‘The Magicians’. He also wrote a collection of short stories titled, ‘The Other Place’ and was the writer and producer of the film, ‘Last Holiday’.
In 1958, he became an establishing member of the ‘Campaign for Nuclear Disarmament’. Two years later, he published ‘Literature and Western Man’, a 500 page review of Western prose in all its categories.
He wrote his autobiography, ‘Margin Released’ in 1962, which provides its readers with valuable insights into his work. The same year, he released the novel, ‘The Shapes of Sleep’.
In 1964, he published a comprehensive essay titled, ‘Man and Time’ and the novel, ‘Sir Michael and Sir George’. Four years later, he published, ‘The Image Men Vol. 1: Out of Town’ and ‘The Image Men Vol. 2: London End’.
Between 1975 and 1976, he authored ‘The Carfitt Crisis’ and ‘Found Lost Found’. 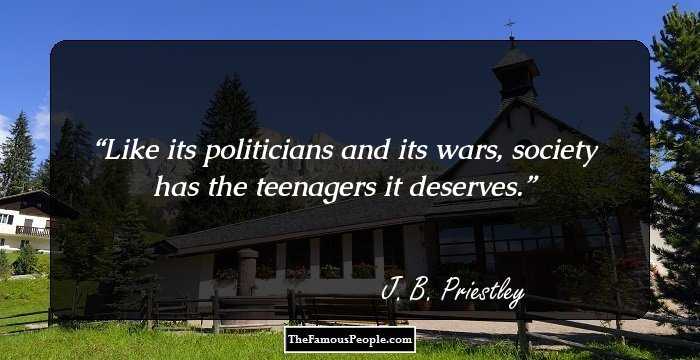 Quotes: Like
Major Works
In 1929, he published one of his best-known works, ‘The Good Companions’. The publication went on to receive a ‘James Tait Black Memorial Prize’ and was adapted twice for films. It became an instant hit as soon as it was published in Europe. Although it was not very well-regarded by critics, the readers loved the book and it also went to be adapted into a theatrical production in 1931.
Awards & Achievements
He was presented an honorary Doctor of Letters in 1970 by the University of Bradford.
Continue Reading Below
In 1973, he was granted the ‘Freedom of the City’ honor by the city of Bradford.
He was awarded the Order of Merit in 1977. 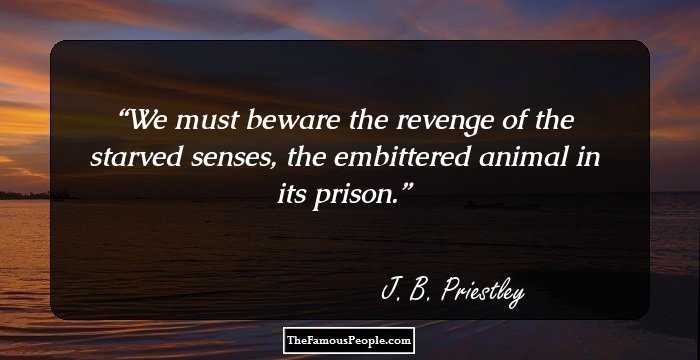 Personal Life & Legacy
He married three times. He got married to Emily Tempest in 1921 and had two daughters with her. Emily died from cancer in 1925.
In 1926, he married Jane Wyndham-Lewis, with whom he had two daughters and a son.
In 1953, he divorced Jane Wyndham-Lewis and married the archaeologist and writer Jacquetta Hawkes.
He loved classical music for most part of his life and even composed a libretto titled ‘The Olympians’, which premiered in 1949.
In his later years, he suffered from depression and passed away in Statford-upon-Avon in Warwickshire, England at the age of 89.
After his death, a distinct collector’s edition of ‘Bright Day’ was issued in 2006, celebrating the 60th anniversary of the novel.
Trivia
This famous English writer, broadcaster and playwright of the ‘An Inspector Calls’ fame was known for always posing with and carrying his trademark pipe.

See the events in life of J. B. Priestley in Chronological Order