Advanced Search
Sir Derek Harold Richard Barton was an English chemist who received the Nobel Prize in Chemistry for the groundwork he laid for the determination of the three-dimensional shape of organic compounds. He shared the prize with a Norwegian chemist named Odd Hassel. Barton had a breakthrough while studying ‘conformational analysis’ or the ‘geometries of a molecule and its associated energies’ in 1950 when he suggested that the reaction rates of isomers were affected by the orientations of functional groups in space. Barton was one of the brilliant chemists at the heart of the movement that brought in a revolution in field of organic chemistry during the period 1940-1970. He did not restrict himself to any specialization in one field of chemistry but moved into other areas of the subject as well. He was gifted with the ability to draw out the general implications from the work of other chemists and bridged the boundaries of different fields of chemistry. He had the confidence to use his intuition instead of deductive logic in suggesting lines of reasoning which had remained incomplete until then. He carried out research on the oxidation of saturated hydrocarbons and on the way oxyradicals behaved. He developed an easier way to synthesize the hormone ‘aldosterone’ which was required for the treatment of Addison’s disease. Peter Mitchell
8th September In History
DID WE MISS SOMEONE?
CLICK HERE AND TELL US
WE'LL MAKE SURE
THEY'RE HERE A.S.A.P
Quick Facts 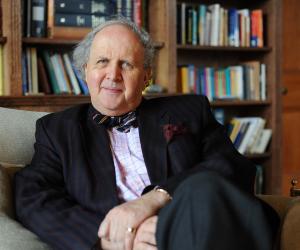 British Celebrities
Organic Chemists
British Men
University Of London
Imperial College London
Childhood & Early Life
Derek Barton was born in Gravesend, Kent, England on September 8, 1918. His father was a carpenter named William Thomas Barton and his mother was Maude Henrietta Lukes.
He studied at the ‘Gravesend Grammar School’ from 1926 to 1929, the ‘King School, Rochester’ from 1929 to 1932 and at the ‘Tonbridge School, Kent’ from 1932 to 1935.
He enrolled for one year at the local ‘Gillingham Technical College’ in Gillingham, England to prepare himself to study chemistry.
He joined the ‘Imperial College, London’ in 1938 from where he received his B.Sc. degree in Chemistry in 1940.
He received a research fellowship from the Guiness Research, Distilleries Co. Ltd. and worked for his PhD from 1940 to 1942.
He earned his PhD in 1942 under the supervision of Martin Mugdan, an industrial chemist, who had fled Germay in 1939.
He received his D.Sc. from the ‘Imperial College’ in 1950.
Continue Reading Below
Career
Derek Barton was asked to join the armed forces to fight in the Second World War after he had completed his PhD. But as he was declared unfit for regular military service because of a weak heart, he joined the Military intelligence instead.
During his stint in the Military Intelligence he spent two years in the development of an invisible ink that could not be detected by iodine spray.
He taught chemistry at the ‘Imperial College, London’ from 1945 to 1946 after leaving MI post the war.
In 1946 he joined Albright & Wilson’s ‘Imperial Chemical Industries’, a major phosphorous producer, at Oldbury factory in the English Midlands and worked on ‘organophosphorous chemistry’ till 1947.
He returned to the Imperial College, London’ in 1947 as a teaching assistant and devoted himself to steroid chemistry.
His work on steroid chemistry attracted the attention of Louis Fieser, the head of the chemistry department at the Harvard University, who offered him a one-year temporary post of researcher. He developed his theory of ‘conformational analysis’ during his stay at Harvard.
He returned to England in 1950 and joined the ‘Birkbeck College’ under the ‘University of London’ as a Reader which was equivalent to an Associate Professor of organic chemistry and became a Professor in 1953. He held this post till 1955.
In 1955 he joined the ‘University of Glasgow’ as a ‘Regius Professor of Chemistry’ and remained with this university untill 1957.
He returned to the ‘Imperial College, London’ in 1957 as the chairman of the chemistry department, and held the post till 1970.
Continue Reading Below
During this time he was asked to collaborate with the newly founded ‘Research Institute for Medicine and Chemistry’ in Cambridge, Massachusetts, funded by the ‘Schering Corporation’. Here, Barton developed a method known as the ‘Barton reaction’ which helped to produce large amounts of the hitherto scarce ‘aldosterone acetate’ which is used for controlling the electrolytic balance of the human body. This success prompted the Ciba pharmaceutical company to set up the ‘Woodward Research Institute’ in Basel, Switzerland.
During the early 1960s, Barton was depressed after divorcing Kate and joined the ‘Institut Francais’ in South Kensington to learn French. Here he met his teacher Christiane Cognet whom he married in 1969.
He became the president of the ‘British Association for the Advancement of Science’ and the president of ‘International Union of Pure and Applied Physics’ in 1969.
He was made a ‘Hoffman Professor of Organic Chemistry’ by the ‘Imperial College, London’ in 1970 and held the post till 1978.
After retiring from the Imperial College’ he served as the Director of the ‘Institute of Chemistry of natural Substances’ in Gif-sur-Yvette, France from 1978 to 1986.
Barton joined the ‘Texas A&M University’ in the United States in 1986 as a ‘Distinguished Professor of Chemistry’ and remained in the post till 1995.
He served as a ‘Dow Distinguished Professor of Chemical invention’ at the ‘Texas A&M University’ from 1995 to 1998.
Major Works
Derek Barton collaborated with W. D. Ollis for the book ‘Comprehensive Organic Chemistry’ published in 1979.
His book ‘Some Recollections of Gap Jumping’ was published in 1991.
Continue Reading Below
The book ‘Half a Century of Free Radical Chemistry’ was published in 1993 while the book ‘Reason and Imagination: Reflections of Research in Organic Chemistry’ was published in 1996.
Awards & Achievements
Derek Barton received the ‘Corday-Morgan Medal’ from the ‘Royal Society of Chemistry’ in 1951 and was made a member of the ‘Royal Society’ in 1954 and a member of the ‘Royal Society of Edinburg’ in 1956.
He received the Fritzsche Award’ in 1956, the ‘Roger Adams Medal’ in 1960 from the ‘American Chemical Society’ and the ‘Davy Medal’ in 1961.
He was made ‘Foreign Member’ of the ‘German Academy of Sciences, Leopoldina’ in 1967.
He received the Nobel Prize in Chemistry in 1969.
He was awarded the ‘RSC Longstaff Prize’ and the ‘Royal Medal’ in 1972.
He was made a ‘Knight of the British Empire’ and a member of the ‘Legion d’Honneur’ in 1972. He became an officer of the legion in 1985.
He received the ‘Copley Medal’ in 1980 and the ‘Priestley Medal’ in 1995.
He was made a ‘Foreign Member’ of the ‘American Academy of Arts and Sciences’ and the ‘American Chemical Society’.
He was an honorary lecture at several American universities at different times.
Personal Life & Legacy
He married Jeanne Kate Wilkins, a clerk, on December 20, 1944, and divorced her in early 1960s. He had a son, William Godfrey Lukes Barton from the marriage.
In 1969 he married Christiane Cognet who died of ovarian cancer in 1992.
After Christiane’s death Barton married Judith Cobb in 1993.
Derek Barton died of a heart attack in College Station, Texas, USA on March 16, 1998.
Recommended Lists:
Scientists #2317
Miscellaneous #9683

See the events in life of Derek Barton in Chronological Order