Hugh Michael Jackman is an Australian actor and producer of remarkable versatility, involved in film, musical theatre, and television. After getting a start in films and television in his native Australia, his role as Curly won him recognition outside Australia while he was catapulted to stardom portraying Wolverine in the blockbuster hit X-Men, a role he reprised over the course of his career in sequels like X2, X-Men: The Last Stand, and, X-Men Origins: Wolverine. In between, he earned critical acclaim for his performance in the romantic comedy, Kate & Leopold, and played a computer-hacking criminal in the thriller, Swordfish. After starring in Christopher Nolan’s, The Prestige, and Darren Aronofsky's, The Fountain, he joined fellow Aussies Nicole Kidman and Baz Luhrmann for the rather extravagant romantic epic, Australia. A veteran of the musical stage, Jackman was a natural fit to serve as host of the Tony Awards and Academy Awards, while also starring in the long-awaited adaptation of Les Misérables. He has lent his voice to many animated characters and has hosted the Tony Awards three times, winning an Emmy Award for one of these appearances, and the 81st Academy Awards. In addition to this Emmy, he has won two Tonies and a Golden Globe. Australian People
Australian Men
Libra Actors
Australian Actors
Actors Who Are In Their 50s
Childhood & Early Life
Jackman was born on 12 October 1968 in Sydney, New South Wales, to Grace McNeil and Christopher John Jackman, a Cambridge-trained accountant. His parents were English and had migrated to Australia in 1967.
He has four older siblings, and a younger half-sister, from his mother's re-marriage. His parents divorced when he was eight, and his mother moved back to England with his two sisters.
He attended primary school at Pymble Public School and later attended the all-boys Knox Grammar School on Sydney's Upper North Shore, where he starred in its production of My Fair Lady in 1985.
In his final year at the University of Technology, Sydney, he took a drama course to make up additional credits. He played the lead in Václav Havel play, The Memorandum, and graduated in 1991.
He completed the one-year course ‘The Journey’ at the Actors' Centre in Sydney and attended the Western Australian Academy of Performing Arts of Edith Cowan University in Perth, from which he graduated in 1994. 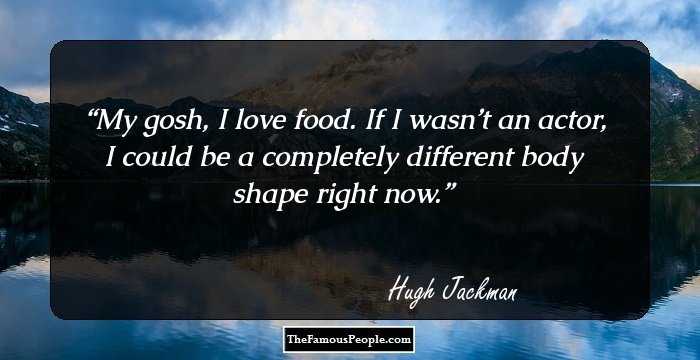 Quotes: Love, I
Continue Reading Below
Career
Jackman got his first professional job in Correlli, an Australian television 10 -part series first broadcast by ABC TV in 1995. It starred Deborra-Lee Furness as prison psychologist Louisa Correlli.
Playing the leading role of Curly in the Royal National Theatre's acclaimed stage production of Oklahoma! in London's West End in 1998, he earned an Olivier Award nomination and recognition outside Australia.
In 2004, he won many accolades for his Broadway portrayal of Australian songwriter-performer Peter Allen in the hit musical, The Boy from Oz, and co-starred with Daniel Craig in the play A Steady Rain.
In 2005, the actor joined with longtime assistant John Palermo to form a production company, Seed Productions, aiming to mount modest-budget films to harness local talent in Jackman's home country.
He starred in the 2006 film ‘The Prestige’, directed by Christopher Nolan and co-starring Christian Bale, Michael Caine, and Scarlett Johansson. He portrayed Robert Angier, a magician’ trying to outclass a contemporary Alfred Borden.
He portrayed three different characters in Darren Aronofsky's science-fiction, The Fountain: Tommy Creo, a neuroscientist, Captain Tomas Creo, a Spanish Conquistador in Seville; and a future astronaut, Tom.
In 2008, director Baz Luhrmann cast him in his much-publicized epic film, Australia, which co-starred Nicole Kidman. He played a tough, independent cattle drover, who reluctantly helps an English noblewoman.
He had a one-man show at the Curran Theatre in San Francisco from 3–15 May 2011.The production was a mixture of his favorite Broadway and Hollywood musical numbers, backed by a 17-piece orchestra.
He starred as Jean Valjean in the film version of the musical, Les Misérables, an adaptation of the French novel by Victor Hugo. The film was a huge success both commercially and critically.
Continue Reading Below
He has lent his voice to many animated characters –Memphis, an emperor penguin in Happy Feet, to a rat named Roddy in Flushed Away, and to the Easter Bunny in Rise of the Guardians.
The actor is set to reprise his role as Wolverine in the film, X-Men: Days of Future Past. Other future projects include the films, Selma, and, The Greatest Showman on Earth. 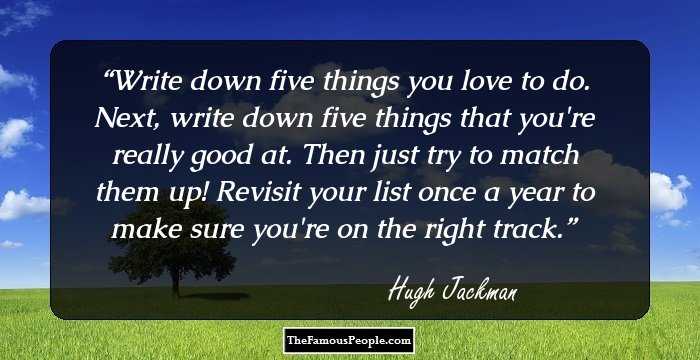 Quotes: You, Love
Major Works
In 1999, Jackman was cast as Wolverine in Bryan Singer's X-Men which grossed $296,339,527 worldwide. He reprised his role in X2: X-Men United, X-Men: The Last Stand, and the prequel X-Men Origins: Wolverine.
He starred as Leopold, a Victorian English duke who accidentally time-travels to 21st-century Manhattan, where he meets Kate (Meg Ryan), a cynical advertising executive, in the 2001 romantic comedy film, Kate & Leopold.
Awards
In 2013, Jackman won the Golden Globe in the Best Performance by an Actor in a Motion Picture - Comedy or Musical category for Les Miserables. He was nominated for an Oscar for his role too.
In 2005 he won an Emmy in the category Outstanding Individual Performance in a Variety or Music Program for The 58th Annual Tony Awards which he presented the previous year.
His role in the X-Men series has won him many awards including the Saturn Best Actor Award for X-Men, People's Choice Favorite Action Movie Star Award and Teen Choice Award for X-Men Origins: Wolverine.
He won two Tony Awards - Special Tony Award category Actors' Equity Association 2004 and also for Best Performance by a Leading Actor in a Musical for The Boy from Oz.
He was presented the 2,487th Star on the Hollywood Walk of Fame accompanied by his family as well as his "Les Misérables" director Tom Hooper and co-stars Anne Hathaway and Amanda Seyfried in 2012. 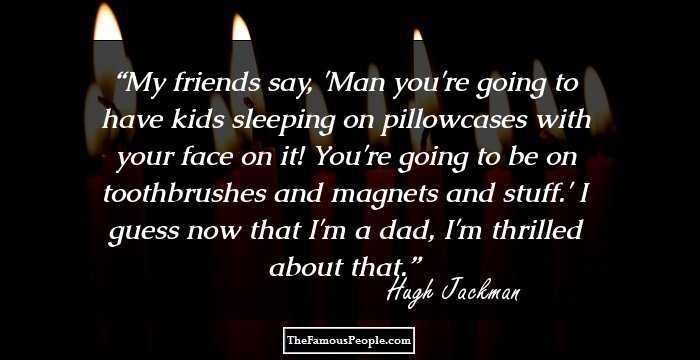 Quotes: Friends
Personal Life & Legacy
Jackman married Deborra-Lee Furness in 1996 after they met on the set of Australian TV show Correlli. Furness had two miscarriages, following which the couple adopted two children - Oscar Maximillian and Ava Eliot.
He is a global advisor of the Global Poverty Project and a vocal supporter of Muhammad Yunus, microcredit pioneer and Nobel Peace Prize winner,
Trivia
This actor said in an interview with Jay Leno that he is a fan of the "Friday The 13th" film series, and he became an actor because he wanted to play Jason in one.
Voted one of The 50 Most Beautiful People in the World by People magazine, this Australian star doesn't smoke in real life. He says he finds it horrible to smoke in movies.

Quotes By Hugh Jackman | Quote Of The Day | Top 100 Quotes

See the events in life of Hugh Jackman in Chronological Order