Nicholas William Hamilton is an Australian actor, who earned fame for his performance in the horror film ‘It.’ He was born and raised in New South Wales, Australia. An audition for a school play instilled in him an interest in acting. He began working in the entertainment industry at a young age and won an award for ‘Best Actor’ when he was 12 years old. He has had the opportunity of working with actors, such as Nicole Kidman, Joseph Fiennes, and Viggo Mortensen in films like ‘Strangerland’ and ‘Captain Fantastic.’ His other notable films are ‘Jack Rabbit,’ ‘Letter to Annabelle,’ ‘Gifted,’ among others. Hamilton has also worked in TV shows like ‘Mako Mermaid’ and ‘Wanted.’ His work in ‘The Dark Tower’ and ‘It’ brought him a lot of appreciation. Presently, he divides his time between Los Angeles and his home-town in Australia. 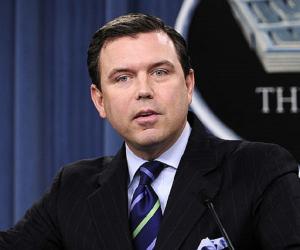 Geoff Morrell
Actors #5266
Film & Theater Personalities #11953
DID WE MISS SOMEONE?
CLICK HERE AND TELL US
WE'LL MAKE SURE
THEY'RE HERE A.S.A.P
Quick Facts

Australian People
Taurus Actors
Australian Actors
Actors Who Are In Their 20s
Australian Film & Theater Personalities
Childhood & Early Life
Hamilton was born on May 4, 2000, to Vicki Atkins and Craig Hamilton in Lismore, New South Wales, Australia, but spent his growing years in Alstonville, a small town in northern New South Wales. He has a brother, Joshua (JJ) Hamilton and two sisters, Rebecca and Rachel Hamilton.
He studies at ‘Alstonville High’ and would complete his graduation by the end of 2018. During his childhood, he never thought of pursuing acting, but he was persuaded to audition for a school play at the age of five, and somehow he liked the experience and ended up playing the role of ‘Elvis Presley.’ He enjoyed the experience and that is how his acting journey commenced. He worked all through his teen years.
Continue Reading Below
You May Like

Famous Beautiful Women With Green Eyes
Career
In 2012, Hamilton began working in the film and television industry. In 2013, he made his debut as Young Dave in the comedy short film ‘The Streak.’
He made his television debut in an episode of the series ‘Mako Mermaids: Islands of Secrets’ (2013) wherein he essayed the role of ‘Ben.’ He guest starred in the television show ‘Wanted’ (2016).
Hamilton was first noticed for his role of James in Liam Connor’s simple but ingenious time-travel short film ‘Time’ (2013). This performance earned him an award as well. Apart from ‘Time,’ he worked in several other short films, including ‘Jack Rabbit’ (2013), ‘Letter to Annabelle’ (2014), ‘Long Shadows’ (2014), and ‘Gifted’ (2015), among others.
His debut feature film was ‘Strangerland,’ written and directed by Kim Farrant. The 2015 mystery and thriller film is set in a fictional town in the outback Australia, where a couple moves with their 2 children to start a fresh life. The couple’s role was played by Nicole Kidman and Joseph Fiennes and Hamilton essayed the part of their son, ‘Tom.’
In 2015, Hamilton auditioned for his first overseas production, a Matt Ross comedy film ‘Captain Fantastic.’ Playing ‘Rellian’ in the film proved beneficial for his career and brought him fame. The film was premiered at the ‘Sundance’ as well as ‘Cannes’ film festivals and received much acclaim.
Hamilton worked with Idris Elba and Matthew McConaughey in the action and fantasy movie ‘The Dark Tower,’ which was directed by Nikolaj Arcel. He played the role of ‘Lucas Hansen’ in this film, which is based on a book by Stephen King. The film released on August 4, 2017, but received only lukewarm response.
In the 2017 supernatural horror film ‘It,’ he portrayed the character of Henry Bowers, a sadistic bully with a gang of followers. The movie was inspired by Stephen King’s acclaimed novel, which was earlier adapted into a miniseries in 1990. He was the only Australian in the film’s (‘It’) cast. Hamilton played the second villain, next only to the monster clown, and had to act tough with the other younger actors of the film, but he appreciated the cooperation of the other cast members, who made it easy for him to essay the role of a villain. The film was released on September 6, 2017. His forthcoming projects are second parts of these two films, ‘The Dark Tower’ and ‘It.’
Awards & Achievements
Hamilton received his first award at the age of 12. For his performance as ‘James’ in the short film ‘Time’ he won the ‘Best Male Actor Award’ at the 2013 ‘Tropfest Short Film Festival.’
His film ‘Captain Fantastic’ was nominated for the ‘Best Ensemble Cast in a Feature Film’ award at the 2017 ‘Screen Actors Guild’ awards.
Personal Life
Presently he splits his time between Australia and Los Angeles. After his shoots in Hollywood and Canada, he is back to school and is the same local country boy. He gives credit to his family for keeping him grounded. He plans to complete his schooling by the end of 2018 and then head off to Los Angeles. He also loves the technical side of filmmaking and plans to take up writing and direction in future.

See the events in life of Nicholas Hamilton in Chronological Order