(Australian Actor Known for His Role in 'The Hunger Games' Film Series and 'Independence Day: Resurgence')

Liam Hemsworth is an Australian actor best known for his role as Gale Hawthorne in the blockbuster movie series 'The Hunger Games'. Following the footsteps of his two older brothers Luke and Chris, Liam entered the entertainment business in his teenage years and has made his mark not only in the Australian film industry, but has also secured a spot in Hollywood. He started his career by acting in the Australian television series 'Neighbours' and 'The Elephant Princess'. However, he soon moved to the U.S. to follow his acting dreams. He showcased his acting potential in the movie 'The Last Song', which was his first taste of success on the big screen. He was soon selected by the 'Details' magazine as one of 'The Next Generation of Hollywood's Leading Men'. He then went on to star in movies like 'The Hunger Games', 'Love and Honor', 'Paranoia', 'The Dressmaker' and 'Independence Day: Resurgence'. In the meantime, his tumultuous relationship with Miley Cyrus kept him in the news for a good few years. The couple is currently engaged after staying apart for a couple of years. Image Credit
https://www.youtube.com/watch?v=NGI0HyZfUUI
(All About Strength) Australian People
Australian Men
Tall Celebrities
Tall Male Celebrities
Capricorn Actors
Childhood & Early Life
Liam Hemsworth was born on January 13, 1990, in Melbourne, Australia to Leonie and Craig Hemsworth. His father worked as a local social-services counselor while his mother was an English teacher.
He has spent his childhood years in Melbourne as well as Bulman, a small town in the Outback, where his parents worked in a ranch. His most vivid childhood memories are having adventures with his brothers in the wilderness of Bulman, among buffalos and crocodiles.
When he was eight years old, his family settled in Phillip Island, where his parents still live. During his teenage years, he spent much of his time surfing with his brothers.
He has two older brothers, Luke and Chris, both actors. While Luke is a notable figure in Australian television, Chris is an A-list Hollywood star. The brothers share a healthy competition and help out each other with their projects.
When his older brother Luke temporarily started a flooring business after being disillusioned with acting, Liam started to help his brother. In 2009, he came to the US following his older brother Chris after Sylvester Stallone showed interest in a taped script reading he did in Australia. 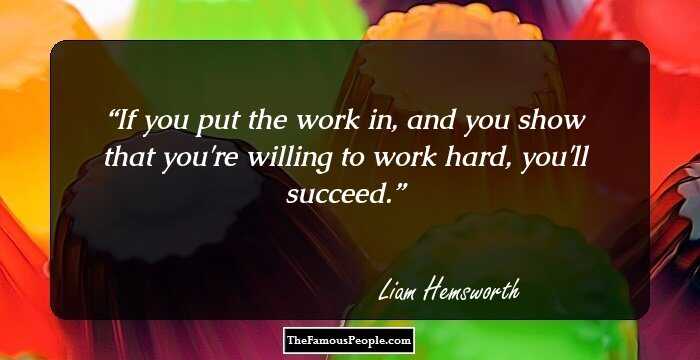 Continue Reading Below
Career
Liam Hemsworth participated in school plays and started auditioning at the age of 16. His professional career started in 2007 when he made guest appearances in two Australian soap operas, 'Home and Away' and 'McLeod's Daughters'.
His first major role was in the show 'Neighbours' in which his older brother Luke acted previously. He portrayed the role of Josh Taylor, an athletic paraplegic, from 2007 to 2008.
In 2008, he got a major role in the children's television show 'The Elephant Princess'. For 26 episodes, he played the role of Marcus, the lead guitarist of the band formed by the protagonist.
In 2009, he appeared in a couple of episodes of the television series 'Satisfaction'. The same year, he also got his break in the big screen, acting in the British film 'Triangle'. He also appeared in a short role in the film 'Knowing'.
He was cast in the 2010 movie 'The Expendables' by Sylvester Stallone. However, after his character was cut out of the script, Stallone offered him a role in the 2012 sequel 'The Expendables 2'.
He got selected for a lead role in the 2010 coming of age drama film, 'The Last Song'; in the movie, he acted opposite his future fiancée Miley Cyrus. He also appeared in one of her music videos titled 'When I Look at You'.
In 2011, he landed one of the lead roles, Gale Hawthorne, in the film adaptation of the best-selling novel series, 'The Hunger Games', by Suzanne Collins. The first movie of the series, 'The Hunger Games', was released in 2012, followed by three more movies in the next three years.
He acted in the 2013 war drama 'Love and Honor', which was originally filmed two years earlier. The same year, he acted in the crime drama film 'Empire State'. He also acted alongside Harrison Ford, Gary Oldman and Amber Heard in the movie 'Paranoia'.
In 2015, he appeared in the movie 'The Dressmaker', an Australian revenge comedy based on the eponymous novel. In the film, he worked with Kate Winslet and played the character of her lover.
Continue Reading Below
In 2016, he was cast as one of the lead characters of the movie, 'Independence Day: Resurgence', which is the sequel to 1996 film 'Independence Day'. Part of an ensemble cast, he played the role of the U.S. pilot Jake Morrison. 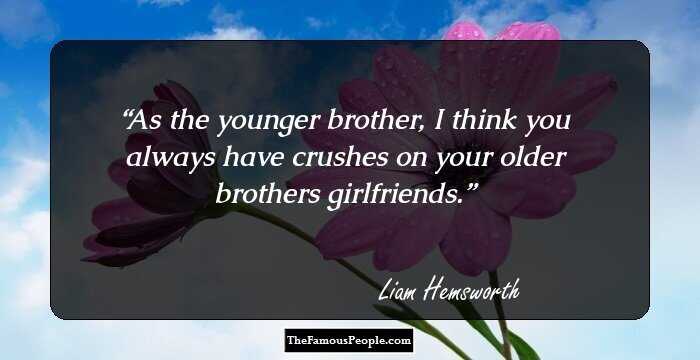 Major Works
'The Last Song' was one of Liam Hemsworth's major performances initially, and earned him a number of awards and nominations. The movie performed well in the box office and grossed a total of $89,041,656 worldwide.
'The Hunger Games' film series is by far his most successful work so far. All the movies in the series were commercially successful and finished first at the North American box office during both their opening and second weekends. Among the highest grossing film series based on young adult books, 'The Hunger Games' series ranks second in North America after the 'Harry Potter' series, earning over $1.4 billion.
Awards & Achievements
For his role in 'The Last Song', Liam Hemsworth received the Teen Choice Award for 'Male Breakout Star' and the Young Hollywood Breakthrough of the Year award. Along with Miley Cyrus, he also won the 'Fave Kiss' award in the Nickelodeon Australian Kids' Choice Awards.
His role in the hit series 'The Hunger Games' brought him numerous nominations. In 2012, he won the People's Choice Award for 'Favorite On-Screen Chemistry' along with his co-stars Jennifer Lawrence and Josh Hutcherson.
In June 2012, he was honored by the Los Angeles-based non-profit organization 'Australians in Film'. He received the Breakthrough Award for international success. 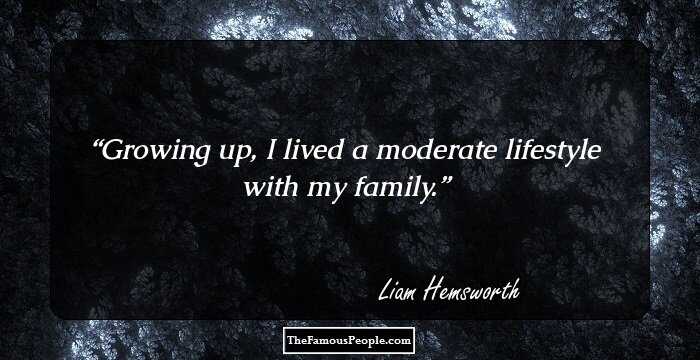 Quotes By Liam Hemsworth | Quote Of The Day | Top 100 Quotes

See the events in life of Liam Hemsworth in Chronological Order