Henry “Henny” Youngman was a comedian cum violinist who made one-liners famous in an era when lengthy anecdotes were the norm in comedy. The celebrated columnist Walter Winchell called him the ‘King of One-Liners’ who never depended upon elaborate jokes to make the audience laugh. His one-liners were extremely simple and he went straight to the punch line—causing the listeners to double up in hysterical laughter! A very hardworking man, he would appear in more than 200 performances a year at nightclubs all over New York, Las Vegas, Los Angeles, Montreal, and Chicago. He also performed at meetings, cruises, banquets, functions, and colleges. The prolific entertainer was always on the lookout for employment opportunities - he belonged to a time when it was difficult to make a living as an entertainer. The tall and well-built comedian carried with him a 19th century violin which he would occasionally play during his performances to add to the effect of his one-liner jokes. He hosted a television series ‘The Henny and Rocky Show’ with Rocky Graziano, and appeared on ‘Rowan and Martin’s Laugh-In’. He was known to make his wife Sadie, the butt of many of his jokes, the most popular one being, ‘Take my wife, please’ which became his signature one-liner. American Celebrities
Comedians
American Men
Male Comedians
American Comedians
Childhood & Early Life
Henny Youngman was born in England but his family moved to New York when he was young. His father’s name was Yonkel Yungman which he later changed to Jacob Youngman. His family was Jewish.
His father was a music lover and wanted his son to become a violinist, and arranged for him to attend classes.
He attended Manual Training High School for two years. He was quite naughty at school and was often expelled from the classroom.
Since his childhood, Henny loved telling jokes to his friends and family - he would often hear jokes in the theaters, and tell them to his friends in his own style.
He spent a lot of time at the vaudeville houses instead of concentrating on his studies, and made his first stage appearance at a street theater. His father found out and had him thrown off the stage.
After this incident, he was sent-off by his father to Brooklyn Vocational Trade School to learn printing. 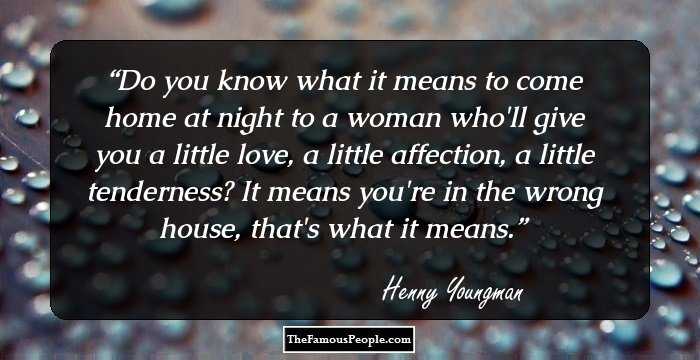 Quotes: You, Love, Home
Continue Reading Below
You May Like

The Best Black Actresses Of All Time
Career
He got a job at a print shop where he began writing and printing ‘comedy cards’ containing jokes. Another aspiring comedian, Milton Berle was impressed by his cards and encouraged him to pursue comedy.
He entered the show business as an orchestra musician and formed a small band called the Swanee Syncopaters. He began to combine comedy with music by telling jokes to the audience in-between musical performances.
He got his big chance when the regular comedy team at the Nut Club in New Jersey failed to show up for a performance and the manager was desperately looking for a replacement. Henny was a big hit that night.
He developed his own style of comedy, a friendly, non-offensive style of telling one-line jokes with interludes of violin music that endeared him to generations of fans.
In 1937, he was invited to perform on the radio for the first time - on the Kate Smith show. Originally, he was signed for a six-minute spot, but he was so funny that his time was extended to ten minutes. He appeared on the show regularly after this.
He made his film debut with ‘A Wave and a WAC and a Marine’ in 1944, but could not find much success in Hollywood and returned to performing in nightclubs.
He was very popular as a stand-up comedian and his radio performances added to his fame. He loved earning money and was always on the lookout for employment opportunities.
He would travel to different cities across the U.S. and Canada often covering over half a million miles and perform over 200 shows per year.
He was the co-host of the television series ‘The Henny and Rocky Show’ which premiered in 1955.
Continue Reading Below
In collaboration with producer Danny Shapiro, he recorded a live album at the Celebrity Club in St. Louis for the National Recording Corporation in 1959.
In 1974, the New York Telephone Company started its Dial-a-Joke. More than three million people called within a month to hear 30 seconds of his jokes.
Youngman appeared many times on television. He had a long running stint on the ‘Rowan and Martin’s Laugh-In’. He also appeared in several films in cameo appearances.
He was completely immersed in his work and never stopped working. He had been performing until his final days, and did not lose his sense of humour even in his deathbed. 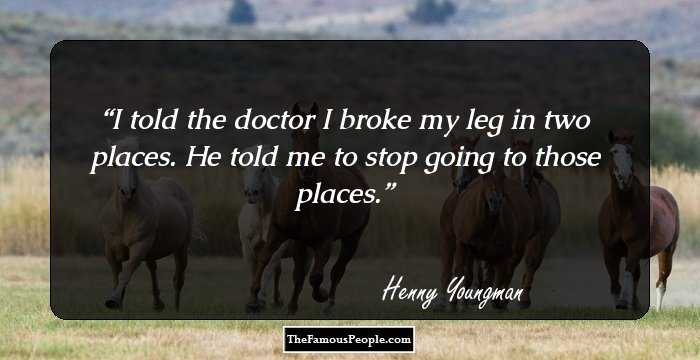 Quotes: Me, I
Major Works
He was a comedian who acquired legendary status for his signature style of comedy—non-offensive, funny one-liners intercepted by violin music. His most famous one-liner which became a classic was ‘Take my wife, please!’
Personal Life & Legacy
He married Sadie Cohen in 1928 and had two children with her. The couple had a loving marriage that lasted till Sadie’s death in 1987.
He died of pneumonia in 1998 at the age of 91. 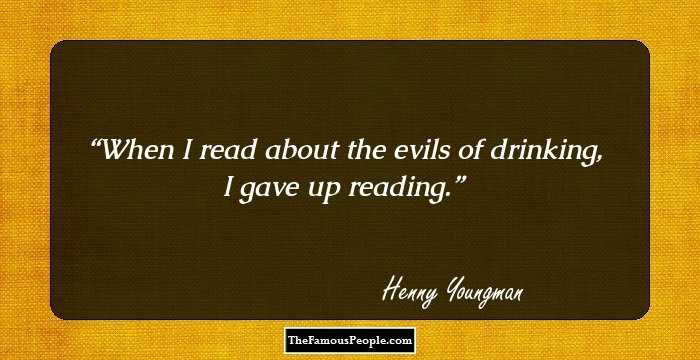 Quotes: I
Trivia
He had a long and productive career spanning over seven decades.
He published an autobiography titled ‘Take My Life, Please!’
You May Like

Quotes By Henny Youngman | Quote Of The Day | Top 100 Quotes

See the events in life of Henny Youngman in Chronological Order