Jack Black is an American actor-producer known for his comic roles in movies, such as ‘School of Rock,’ ‘Tenacious D in the Pick of Destiny,’ and ‘Gulliver's Travels.’ He is also known for his voice over roles in the ‘Kung Fu Panda’ franchise. He grew up in Culver City, attending ‘Culver City High School’ and the ‘Poseidon School.’ As a 13-year-old, he appeared in commercials. Later, he attended ‘Crossroads High School for Arts & Sciences’ in Santa Monica where he discovered his talent for acting. He went on to act in television movies and series, such as ‘Life Goes On,’ ‘Northern Exposure,’ ‘The Innocent,’ ‘The X-Files,’ ‘Mr. Show,’ and ‘Picket Fences.’ His first movie role was in ‘Bob Roberts’ in 1992. He landed his breakthrough role in the movie ‘High Fidelity.’ Thereafter, he played a number of leading roles in movies like ‘Shallow Hal,’ ‘Nacho Libre,’ ‘Tenacious D in The Pick of Destiny,’ ‘Year One,’ and ‘Gulliver’s Travels.’ Apart from acting, he has also voiced characters in animated movies. He won critical acclaim for his role in the movie ‘School of Rock.’ Black won the ‘Best Voice’ award for voicing ‘Eddie Riggs’ in the popular video game ‘Brutal Legend.’ Also a musician, Jack Black is the lead singer for the band ‘Tenacious D,’ which he founded along with Kyle Gass. American People
Hard Rock Singers
American Men
California Actors
Virgo Actors
Childhood & Early Life
Jack Black was born Thomas Jacob Black on August 28, 1969, in Santa Monica, California, USA, to Judith Cohen and Thomas William Black. His mother is Jewish, while his father is of Scotch-Irish and German ancestry.
He had a traditional upbringing and went to Hebrew school. After his parents’ divorce, young Jack moved to Culver City where he stayed with his father, but visited his mother frequently.
In 1982, Black was selected to appear in a commercial for a video game titled ‘Pitfall!’ He studied at ‘Culver City High School’ and ‘Poseidon School.’ Later, he attended ‘Crossroads High School for Arts & Sciences,’ Santa Monica. 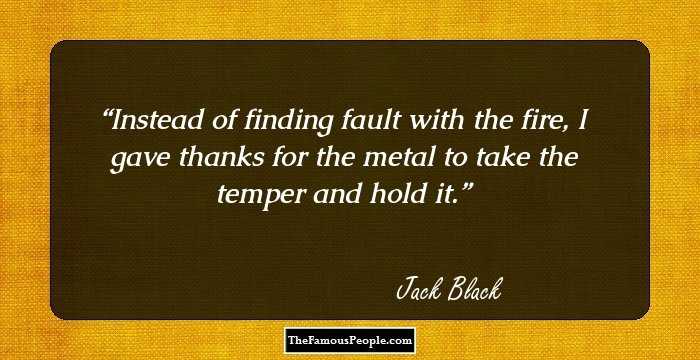 Quotes: I
Continue Reading Below
Career
Jack enrolled at UCLA where he made acquaintance with Tim Robbins who made him part of ‘The Actor’s Gang,’ an acting troupe. It was in Tim’s directorial venture ‘Bob Roberts’ that Jack made his acting debut in 1992.
From 1993 to 1996, he appeared in various television series, such as ‘Life Goes On,’ ‘Northern Exposure,’ ‘The Innocent,’ ‘The X-Files,’ ‘Mr. Show,’ and ‘Picket Fences.’
The actor then played small roles in various movies, including ‘Airborne,’ ‘Demolition Man,’ ‘Waterworld,’ ‘The Fan,’ ‘The Cable Guy,’ ‘Mars Attacks!,’ ‘Dead Man Walking,’ ‘The Jackal,’ and ‘Enemy of the State.’
The actor became famous with his role in the 2000 movie ‘High Fidelity.’ Thanks to his eye-catching performance in the movie, he went on to bag leading roles in movies like ‘Shallow Hal,’ ‘Nacho Libre,’ ‘Tenacious D in The Pick of Destiny,’ ‘Year One,’ and ‘Gulliver’s Travels.’
The multi-talented actor lent his voice for an episode titled ‘Husbands and Knives’ in the popular comic sitcom ‘The Simpsons.’ In 2009, he starred in the children’s show ‘Yo Gabba Gabba!’ where he sang songs like ‘It’s Not Fun to Get Lost,’ ‘Friends,’ and ‘The Goodbye Song.’
In 2011, he starred in the dark comedy movie ‘Bernie’ where he played the role of ‘Bernie Tiede’ who kills a rich widow, portrayed by Shirley MacLaine. His role was well-received by critics and audiences alike.
He played a guest role alongside Cloris Leachman and Jessica Alba in ‘The Office.’ His other guest television appearances include a role in the ‘iStart a Fan War’ episode of ‘iCarly,’ a teen sitcom.
The actor has starred in the Dan Harmon and Rob Schrab shows, ‘Computerman,’ ‘Timebelt,’ and ‘Laserfart.’ He also appeared in the comedy ‘Awesometown’ as George Washington who takes credit for other presidents’ accomplishments.
Black’s songs ‘Master Exploder’ and ‘The Metal’ were featured in the film ‘Tenacious D in The Pick of Destiny,’ which was directed by Liam Lynch. It had cameo roles from Tim Robbins and Dave Grohla.
Continue Reading Below
In 2012, he recorded a song for the Library of Congress and RIF called ‘Book People Unite’ along with other celebrities. He recorded a song for ‘The Doomstar Requiem,’ the fourth album of the metal band ‘Dethklok,’ and even made an appearance in the music video.
Black played a fictional version of author R. L. Stine in ‘Goosebumps.’ He also voiced two of Stine's creations, ‘Slappy the Dummy’ and ‘The Invisible Boy’ in 2015. He reprised the role in the film's 2018 sequel ‘Goosebumps 2: Haunted Halloween.’
Meanwhile, in 2017, he was seen alongside Dwayne Johnson and Keven Hart in the movie ‘Jumanji: Welcome to the Jungle’ where he played ‘Professor Sheldon Oberon.’ He reprised his role as ‘Professor Sheldon Oberon’ in the film’s 2019 sequel, ‘Jumanji: The Next Level.’ 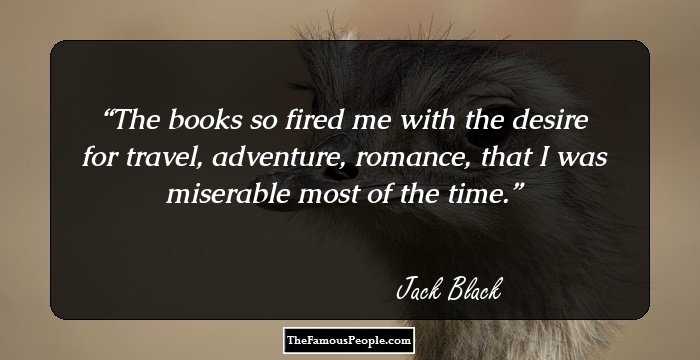 Quotes: Me, Time, Books, I
Major Works
Jack’s role in the movie ‘School of Rock’ impressed the audience and was praised by the critics. His character ‘Dewey Finn,’ who is a dejected singer and musician, disguises as a music teacher and inspires students to explore their talent. He also won a ‘Golden Globe’ nomination for ‘Best Actor – Musical or Comedy.’
The talented actor is also the co-founder of the rock band ‘Tenacious D’ along with fellow musician Kyle Glass. After the duo released their debut album ‘Tenacious D,’ they came up with two more albums titled ‘The Pick of Destiny’ and ‘Rize of the Fenix.’ Tracks from the first two albums have been used in several video games.
Awards & Achievements
The talented voice artist was conferred with the ‘Best Voice’ award at the 2009 ‘Spike Video Game Awards’ for voicing ‘Eddie Riggs’ in the video game ‘Brutal Legend.’
On September 18, 2018, Black was inducted into ‘Hollywood's Walk of Fame.’
Personal Life & Legacy
Black proposed marriage to Tanya Haden, a celebrated cellist, in January 2006. Black and Tanya were high school buddies and had met after a decade at a common friend’s party.
The couple exchanged nuptial vows in California on 14th March 2006. They have two sons, Samuel Jason Black and Thomas David Black.
This star won US $125,000 when he appeared on the celebrity edition of ‘Who Wants to Be a Millionaire.’ The episode, which was aired in October 2001, also featured celebrated comedy artists Denis Leary and Jimmy Kimmel.
Black created a YouTube channel called ‘Jablinski Games’ on December 21, 2018.
Trivia:
Along with Owen Wilson, Luke Wilson, Ben Stiller, Will Ferrell, Vince Vaughn, and Steve Carell, Jack Black is a member of the ‘Frat Pack,’ a community of comedians who collaborate frequently for various projects.

See the events in life of Jack Black in Chronological Order