(Known for His Leading Roles in Auteur Films)

Adam Sandler is an American actor and comedian, known for his roles in films like ‘Punch-Drunk Love’ and ‘The Wedding Singer.’ A versatile personality, he is also a screenwriter, film producer, and musician. Along with his feature films, which have performed exceptionally well at the box office, he has also released six comedy albums, two of which were certified double-platinum. He was inclined towards comedy from a young age and kept his fellow school mates entertained with his antics and comedy acts. It was his brother who spotted his potential and encouraged him to take up comedy on a professional level. He took acting classes after high school and graduated from the ‘Tisch School of the Arts’ at ‘New York University.’ Early on in his career, he ventured into television and became a regular on a ‘MTV’ game show. Soon, he was selected as a cast member on ‘Saturday Night Live’ (SNL) following which he became a popular comedian. He forayed into films and found considerable success as a comedian. He then came up with his own film and television production company named ‘Happy Madison Productions’ which has produced numerous films. He is also well known for his donations to charitable causes. American People
Actors
Directors
Comedians
American Men
Childhood & Early Life
Adam Richard Sandler was born on September 9, 1966, in Brooklyn, New York, USA, to Stanley and Judith ‘Judy’ Sandler. His mother was a nursery school teacher, while his father worked as an electrical engineer. He is the youngest of the couple’s four children.
He attended ‘Manchester Central High School’ where he earned the reputation of being the clown of his class. His brother spotted his talent and encouraged him to perform at a stand-up comedy club in Boston. Motivated to pursue a career in show business, a young Sandler took classes at the ‘Lee Strasberg Theater & Film Institute’ in New York City after graduating from high school.
He proceeded to attend the ‘Tisch School of the Arts’ at ‘New York University,’ graduating in 1988 with a bachelor’s degree in acting. 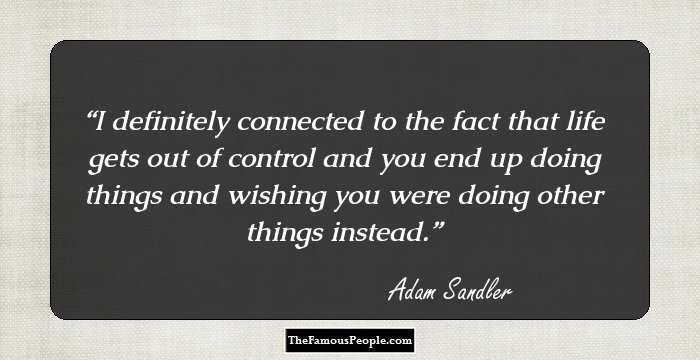 Continue Reading Below
Career
One of Adam Sandler’s first television appearances was on ‘The Cosby Show’ in the late 1980s in which he appeared as a friend of the Huxtable family. He also became a regular on the ‘MTV’ game show ‘Remote Control.’ During this period, he continued performing stand-up comedy as well and caught the attention of comedian Dennis Miller who recommended him to the staff of ‘Saturday Night Live’ (SNL).
He was employed as a writer on ‘SNL’ in 1990. Soon, he started making occasional appearances on the comedy show and became a cast member. He was part of the show for five years, gaining much popularity for his juvenile, oddball antics.
Even though he had started appearing in films during the late-1980s, it was only during the 1990s that he started receiving recognition for his performances in movies. He appeared in the film ‘Coneheads’ with Chris Farley, David Spade, and others in 1993. In 1994, he co-starred in ‘Airheads’ with Brendan Fraser and Steve Buscemi.
His successful string of films continued into the late-1990s and he received much acclaim for his role as an unsuccessful ice hockey player who discovers his passion for golf in the comedy film ‘Happy Gilmore’ in 1996. He followed it up with other comedic roles, such as his portrayal of a singer in ‘The Wedding Singer’ (1998).
He furthered his career by founding his own company ‘Happy Madison Productions’ in 1999. He has since produced many films under the banner, the first one being fellow ‘SNL’ cast member Rob Schneider's film ‘Deuce Bigalow: Male Gigolo.’ Sandler is known for frequently casting ‘SNL’ performers in various roles in his films.
During the 1990s, he also made a series of comedy albums: ‘They're All Gonna Laugh at You!’ (1993), ‘What the Hell Happened to Me?’ (1996), ‘What's Your Name?’ (1997), and ‘Stan and Judy's Kid’ (1999). Two of these albums were certified double platinum. He has also released comedy albums, such as ‘Shhh…Don’t Tell’ (2004) and ‘100% Fresh’ (2019) to great reviews and success.
Adam Sandler co-starred with Don Cheadle and Jada Pinkett Smith in the 2007 drama film ‘Reign Over Me’ which was about a man who loses his wife and children in the ‘September 11 attacks’ and is helped by an old friend to recover from the trauma.
In 2011, he was seen alongside Jennifer Aniston, Nicole Kidman, Nick Swardson, and Brooklyn Decker in the romantic comedy film ‘Just Go With It.’ The movie was panned by the critics but was well-received by the fans. It was a big commercial hit, grossing over $214 million.
In 2014, he once again proved his mettle in comedy by playing the role of Jim Friedman in the movie ‘Blended.’ In the movie, he portrayed the character of a widower who falls in love with a divorcee with two sons. The film was a box office success, even though it received negative reviews from critics.
Continue Reading Below
In 2015, Adam released his theatrical film ‘Pixels’ in which he co-starred with Kevin James, Michelle Monaghan, and Peter Dinklage. The same year, he released his first ‘Netflix’ original ‘The Ridiculous 6.’ Though the movie was panned by the critics, ‘Netflix’ announced that the movie had an impressive number of views within the first 30 days of its release.
In May 2019, Sandler made his first appearance as the host of ‘SNL,’ ending the episode with a tribute to his friend and fellow cast member, Chris Farley. He reunited with his ‘Just Go With It’ co-star Jennifer Aniston for the action-comedy movie ‘Murder Mystery’ which released in June 2019.
He has also voiced the character of Dracula in the ‘Hotel Transylvania’ movie franchise. 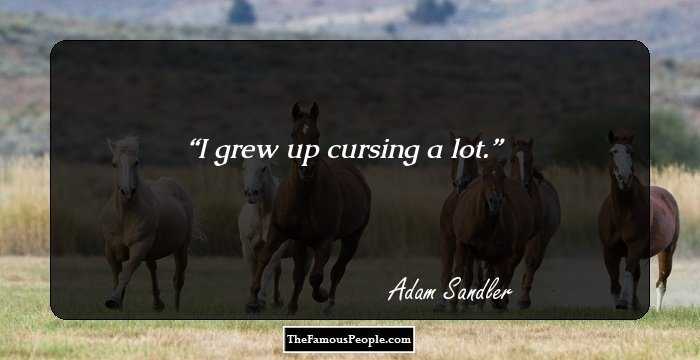 Major Works
Adam Sandler’s portrayal of an ice hockey player, who possesses a powerful and dangerous slapshot, in the sports comedy film ‘Happy Gilmore’ earned him much acclaim. The film received mixed reviews, but was a commercial success. The screenplay of the film was written by Sandler and Tim Herlihy.
Sandler’s performance in the movie ‘Funny People’ earned him acclaim and recognition. He co-starred with Seth Rogen and Leslie Mann in the comedy-drama film which received generally positive reviews, with critics praising the script and Sandler’s performance in particular.
In 2017, Adam Sandler portrayed the character of Danny Meyerowitz in the comedy-drama movie ‘The Meyerowitz Stories.’ The movie opened to positive reviews from critics and Sandler received critical praises for his performance from all over the world.
Philanthropic Works
In 2007, Adam Sandler made a $1 million donation to the ‘Boys and Girls Club’ in Manchester, New Hampshire. 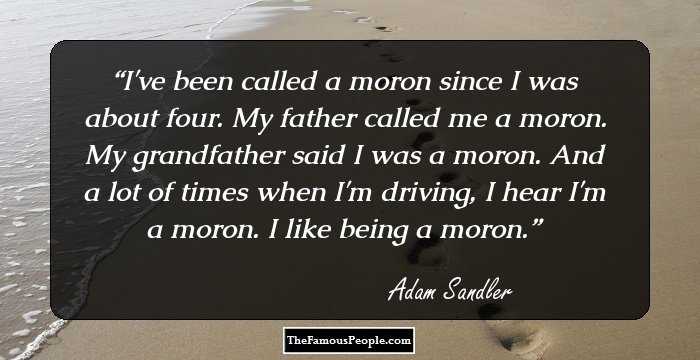 Quotes: Like
Awards & Achievements
In 2002, he won the ‘Best Actor’ award for ‘Punch-Drunk Love’ at the ‘Gijón International Film Festival.’
In 2014, he was named ‘Male Star of the Year’ at the ‘CinemaCon Awards.’
He is also the recipient of several ‘People's Choice Awards,’ including ‘Favorite Comedic Movie Actor’ for four consecutive years from 2012 to 2015.
In 2017, he won the ‘Hollywood Film Award’ under the category ‘Comedy of the Year’ for his film ‘The Meyerowitz Stories.’
Personal Life & Legacy
Adam Sandler married actress Jacqueline Samantha Titone in 2003. The couple is blessed with two daughters, namely, Sadie and Sunny Madeline.

Quotes By Adam Sandler | Quote Of The Day | Top 100 Quotes

See the events in life of Adam Sandler in Chronological Order 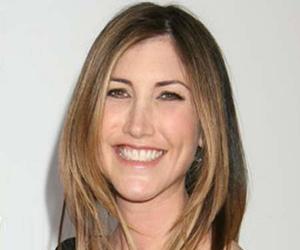