Vince Vaughn is an American actor, comedian, screenwriter, and producer. He is best known for his roles in movies like ‘The Break-Up,’ ‘DodgeBall: A True Underdog Story,’ ‘The Internship,’ ‘Wedding Crashers,’ and ‘Four Christmases.’ He has also appeared in TV series, such as ‘True Detective,’ ‘Sex and the City,’ ‘Going to California,’ and ‘Curb Your Enthusiasm.’ Born into a well-to-do family, he had a comfortable childhood. However, he longed for something more and wanted to try his hand at different things. He developed an early interest in theatre. As a student, he was not at all interested in studies and considered himself average. He then landed an opportunity to appear in a television commercial for ‘Chevrolet,’ which in turn motivated him to try his hand at acting. He then moved to Hollywood, only to find himself struggling as he couldn’t land any acting roles. Even though he made his film debut in 1993, he could not achieve mainstream success. It was his role as ‘Trent Walker’ in the comedy drama film ‘Swingers’ that got him noticed. Though it was not a commercial success, the movie changed his fortune as Steven Spielberg decided to cast him in his movie ‘The Lost World: Jurassic Park,’ which established him as an actor. Vince Vaughn was born Vincent Anthony Vaughn on 28 March 1970, in Minneapolis, Minnesota, USA, to Sharon Eileen and Vernon Vaughn. His mother was a real-estate agent-cum-stockbroker, while his father was a salesman. He and his two sisters had a comfortable upbringing.

He graduated from ‘Lake Forest High School’ in 1988. He used to participate in sports like football, baseball, and wrestling. He was interested in theater from a young age and decided to become an actor even before completing high school. 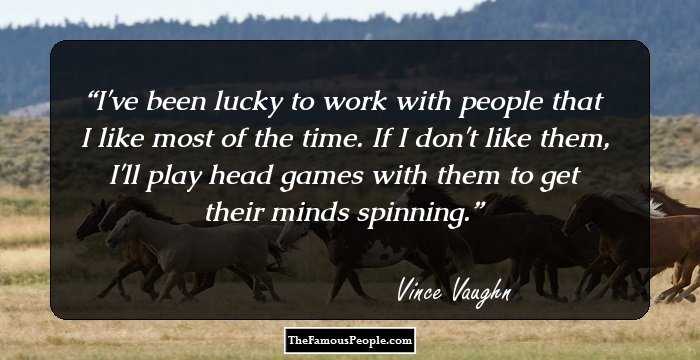 He got an opportunity to appear in a television commercial for ‘Chevrolet’ in 1988. Encouraged by this opportunity, he left for Hollywood to become an actor.

He began his acting career in television in 1989 by appearing in series like ‘China Beach’ and ‘21 Jump Street.’ However, these TV roles did not get him noticed and he struggled to find work.

He made his film debut in 1993, playing ‘Jamie O’Hare’ in the sports film ‘Rudy.’ He met Jon Favreau on the sets of the film and the two became good friends.

He appeared alongside Favreau in the 1996 comedy-drama film ‘Swingers’ in which he played ‘Trent,’ a struggling actor. The film was a critical success, though it did not do well commercially.

Director Steven Spielberg was impressed by Vince’s performance in ‘Swingers’ and cast him in the movie ‘The Lost World: Jurassic Park’ in 1997. His role as ‘Nick Van Owen’ got him widespread acclaim.

He landed several movie roles in 1998 and appeared in films like ‘A Cool, Dry Place,’ ‘Clay Pigeons,’ and ‘Psycho.’ Unfortunately, none of these films performed well. Disheartened, Vince took a short break from acting.

He made his comeback in 2000 with the psychological thriller ‘The Cell’ where he played ‘FBI Agent Peter Novak.’ The film also starred Jennifer Lopez.

In 2001, he co-produced and starred in the comedy film ‘Made,’ which was written and directed by his friend Jon Favreau.

He starred alongside Luke Wilson and Will Ferrell in the 2003 comedy film ‘Old School’ in which he played a thirty-something depressed man seeking to re-live his college days. The film was a big commercial success and boosted his career.

In 2005, he appeared as ‘Jeremy Grey,’ a divorce mediator, in the romantic comedy ‘Wedding Crashers.’ The film received positive reviews and was also a box office hit.

He was cast opposite Jennifer Aniston in the 2006 romantic comedy drama ‘The Break-Up,’ which went on to become a big commercial success in spite of receiving negative reviews.

After his 2013 movie ‘Delivery Man’ opened to mixed reviews and became an average success, he starred in movies like ‘Unfinished Business’ (2015) and ‘Term Life’ (2016), which performed poorly at the box-office.

He was then cast in films like ‘Dragged Across Concrete,’ ‘Fighting With my Family,’ and ‘Seberg.’ He also had a voice role in the animated adult sitcom ‘F is for Family.’

In 2020, he played a supporting role in Clark Duke's directorial debut ‘Arkansas.’ The film, which also starred Liam Hemsworth, John Malkovich, Vivica A. Fox, and Michael Kenneth Williams, was based on a novel of the same name by John Brandon. 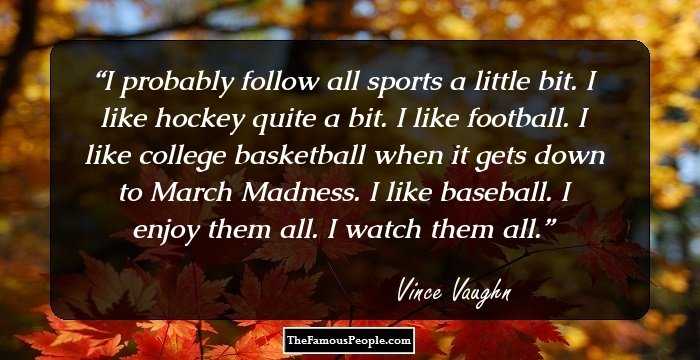 ‘Wedding Crashers’ is one of his best known movies. It won him several nominations and awards. His portrayal of an unrepentant womanizing divorce mediator was highly appreciated.

He won the ‘MTV Movie Award’ for ‘Best On-Screen Team’ for ‘Wedding Crashers’ in 2006. The award was shared with Owen Wilson.

He was presented with the ‘Teen Choice Movie Award’ for ‘Choice Chemistry’ for ‘The Break-Up’ in 2006. The award was shared with Jennifer Aniston. 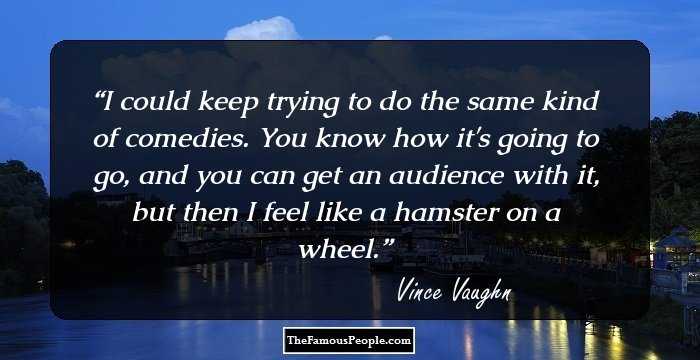 He dated his co-star Jennifer Aniston, but they broke up after a brief relationship.

He married Canadian realtor Kyla Weber in 2010 and has two children with her.
Trivia
He is a sports enthusiast and loves watching baseball and hockey matches.
His father has made cameo appearances in some of his films.

Quotes By Vince Vaughn | Quote Of The Day | Top 100 Quotes

See the events in life of Vince Vaughn in Chronological Order