(Famous for Starring in Comedies Like ‘The Royal Tenenbaums,’ ‘Wedding Crashers,’ and ‘Zoolander’)

Owen Wilson is an actor cum screenwriter who is famous for his collaboration with the film maker Wes Anderson with whom he has worked on several projects. Wilson and Anderson had met while they both attended the University of Texas and began their career by writing the screenplay for ‘Bottle Rocket’. The movie was directed by Anderson and starred Owen and his brother Luke. The movie bombed at the box office but drew the attention of critics and got positive reviews which helped launch the duo’s careers. As a youngster he was a big troublemaker at school and was expelled for stealing a teacher’s notebook. Growing up as the middle child with one elder and one younger brother, Owen was always on the lookout for some mischief that would set him apart from his brothers and get him his parents’ attention. But once he entered the world of films the loving brother took along both his siblings with him to Hollywood. With his distinctive crooked nose, smooth comedic style and deadpan humour he soon found himself an unlikely candidate for comedy films like ‘The Cable Guy’. Soon he was acting in a number of commercially successful films, many of which he also co-wrote. Along with his successful career, the actor is also famous for his link-ups with several beautiful women. American People
Comedians
Screenwriters
American Men
Texas Actors
Childhood & Early Life
He was born as the middle son of advertising executive Robert Andrew Wilson and photographer Laura Cunningham. He has two brothers, Andrew and Luke who are also involved in film making. He is of Irish descent.
He went to the St. Mark’s School of Texas from where he was expelled for misbehavior. He then graduated from Thomas Jefferson School before going to the military academy in New Mexico.
He enrolled at the University of Texas to pursue a Bachelor of Arts in English. There he met Wes Anderson who became his long-term friend and business collaborator. 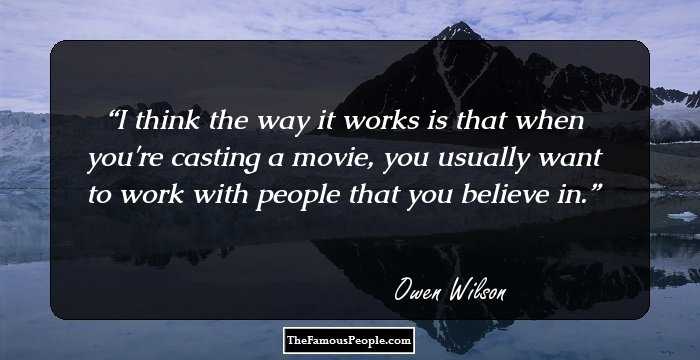 Quotes: Believe
Continue Reading Below
Career
Along with Anderson he co-wrote the script for the film ‘Bottle Rocket’. It was based on a short film directed by Anderson a couple of years ago. The full length film was released in 1996. In spite of being a commercial failure, it got positive reviews.
Ben Stiller, a fan of the movie ‘Bottle Rocket’ offered a minor role to Owen in his directorial venture ‘The Cable Guy’ (1996) which also starred Jim Carrey.
He played the drug addict Nicky in ‘Permanent Midnight’, a comedy drama based on the eponymous book by Jerry Stahl's in 1998. The film failed at the box office in spite of being critically acclaimed.
He found his big break in 2000 when he was cast as Roy O'Bannon in the martial arts comedy ‘Shanghai Noon’. The film was a huge commercial success. He reprised this role in ‘Shanghai Knights’ in 2003.
He co-wrote the script for the comedy drama ‘The Royal Tenenbaums’ (2001) which was directed by his friend Anderson. The film was a critical success and was nominated for several awards including an Academy Award for the screenplay.
The 2004 was a very productive year for the actor and he acted in five films, the most notable of which was the comedy drama ‘The Life Aquatic with Steve Zissou’ which was both a parody of and homage to French diving pioneer Jacques-Yves Cousteau.
He appeared as John Beckwith, a bachelor attorney in the 2005 movie ‘Wedding Crashers’. The romantic comedy was an immediate hit and was also reviewed positively by the critics.
He co-produced and starred in the comedy film ‘You, Me, and Dupree’ in 2006 and appeared as John Grogan in ‘Marley & Me’ in 2008.
In 2011, he appeared in the romantic comedy ‘Midnight in Paris’, a movie which explores the themes of nostalgia and modernism.
Continue Reading Below
In addition to films, he has also appeared in episodes of television shows like ‘Community’ and ‘Drunk History’. He has several upcoming projects for the future which include ‘You Are Here’ and ‘Inherent Vice’ which are slated for release later in 2013 and 2014 respectively. 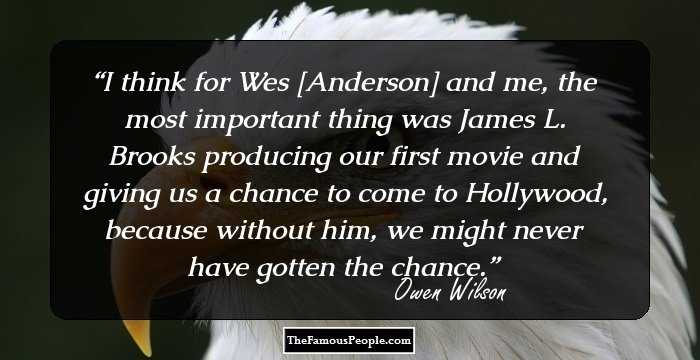 Major Works
His film ‘The Royal Tenenbaums’ is his best known work which made him famous in Hollywood. He co-wrote and starred in the comedy drama which follows the life of three gifted siblings. The movie was ranked as the 159th greatest film ever made by the ‘Empire’ in 2008.
Awards & Achievements
The movie ‘The Royal Tenenbaums’ was nominated for the Academy Award for Best Original Screenplay.
He shared the MTV Movie Award for Best On-Screen Duo with Vince Vaughn for the movie ‘Wedding Crashers’ in 2006. 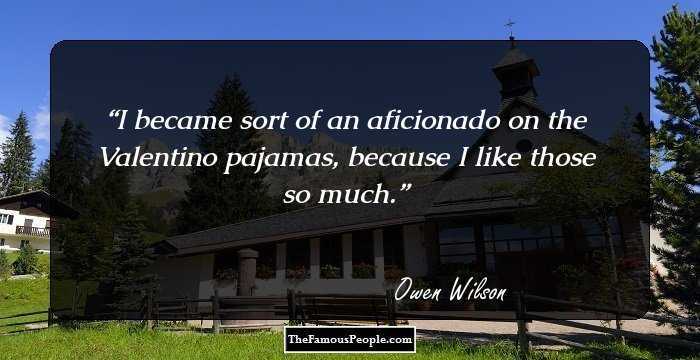 Personal Life & Legacy
He once dated the singer Sheryl Crow and the actress Kate Hudson.
He has a baby with his former girlfriend Jade Duell and is expecting another one with his personal trainer Caroline Lindqvist.
Trivia
His crooked nose is the result of injuries he got as a result of a fight and an accident.
He was once treated for depression and for attempting suicide.

Quotes By Owen Wilson | Quote Of The Day | Top 100 Quotes

See the events in life of Owen Wilson in Chronological Order