Advanced Search
Henry Ward Beecher was a revered American theological Congregationalist clergyman, preacher, and influential social reformer. His reckoning and beliefs regarding the abolition of slavery and God’s unconditional love has left an indelible impression on American history. His sermons proclaimed the adoration of God’s mercy above punishment, and his speeches were a comforting alternative of humour and slang instead of the usual serious testimonials. Amidst the Civil War, he raised funds to release men and women from slavery and stood in support of the “Union”. Unlike other clergymen who challenged the theory of evolution, Henry Beecher supported the theory, stating it didn’t oppose Christian faith. As an ambassador of Women’s Suffrage and asupporter of the Temperance Movement, he advocated reforms necessary for social upliftment. Contrary to his work, he was accused of being a womaniser, and was reported to have had an affair with a woman named Elizabeth Tilton. The news flashed on all sources of media and Theodore Tilton, husband of Elizabeth, filed adultery charges against Beecher. The entire case was monitored closely by the press and it became one of the most widely reported trials in all of America. George R. R. Ma...
DID WE MISS SOMEONE?
CLICK HERE AND TELL US
WE'LL MAKE SURE
THEY'RE HERE A.S.A.P
Quick Facts

American People
Preachers
American Men
Male Writers
Cancer Writers
Childhood & Early Life
Henry Ward Beecher was born to Lyman Beecher, a conservative Congregationalist minister on 24th June, 1813 at Litchfield in Connecticut. When he was three, his mother Roxana Foote passed away and his father later married Harriet Porter.
He was the eighth child among his parents’ thirteen children. Some of his siblings went on to become established authors, educators and activists, of which the closest to him was Harriet Beecher Stowe, who went on to write the noteworthy novel on antislavery ‘Uncle Tom’s Cabin’.
The Beecher family refrained from entertainment such as dancing, theatre and celebration of festivals. Their days were filled with prayer meetings, lectures and religious services. The only other entertainment the Beecher children had was listening to their father play the fiddle.
Henry’s father wanted him to follow his footsteps. However, his childhood was a struggle as he often stammered which was an obvious flaw for a minister. Unable to deliver academically as well, he would be punished every now and then.
At fourteen, he joined a boarding school at Amherst, Massachusetts called ‘Mount Pleasant Classical Institution’ where he was trained to be an orator. He met Constantine Fondolaik at the institute, who became a fellow classmate and lifelong friend.
After receiving his oratorical training there, he studied at Amherst College. Following his bachelor’s degree from the college in 1834, he attended the ‘Lane Theological Seminary’ and received a divinity degree in 1837.
With his degree, he was rendered a licence to preach. Owing to his skills as a captivating speaker, he used to attract masses. He spoke in an engaging manner and revived the faith of many listeners. Soon, he received many offers from eminent churches in the country. 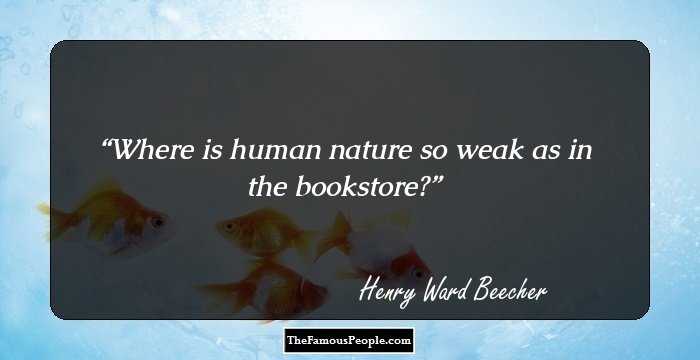 Quotes: Nature
Continue Reading Below
Early Years As A Minister
He became a minister at churches in Lawrenceburg and Indianapolis. In his early years he emphatically protested against slavery.
In 1844, he delivered a speech catering to the youth, which was called ‘Seven lectures to Young Men’. His speech was aimed at spreading awareness about the evils present in a frontier community.
Owing to his theological believes, he was welcomed whole-heartedly into the west to preach, since the western states were liberal and not as rigid as the eastern states.
Although he was a public figure and delivered speeches and sermons every day, he faced poverty and financial hardships in his initial years.
In 1847, he was ordained as a minister of ‘Plymouth Church’ in Brooklyn, New York. Slowly as his sermons became famous in New York, people began gathering in thousands to support his opinions on social reforms. 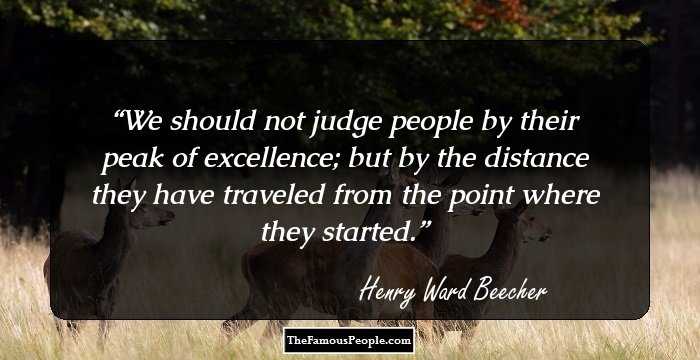 His Belief In The Gospel Of Love
His sermons pronounced that God’s scriptures were not to be considered a reference book for punishment and duty, but rather a guide for the journey of life.
He didn’t defy the beliefs of the Calvinists, who stated that God provided scriptures to teach sinners the right way and take control of their lives. Rather he emphasised on living a virtuous life, not out of obligation or duty but rather out of nature and habit.
He professed that God’s love for mankind is projected through the “gospel” and that God provides people with opportunities through Holy Scriptures to live a life of enjoyment and content.
Continue Reading Below
He spoke of the uncertainty of the existence of ‘Hell’ and encouraged people to seek happiness through leisure activities.
As A Reformer
He believed that religion and politics were two sides of the same coin. Hence, during the Civil War between North and South America, he stood by his anti-slavery propaganda.
He preached about the vices of slavery and conducted slave auctions in the premises of the church to educate and convince the congregants to donate money so that more slaves could be bought for their liberation.
Following his abolitionist ideology, he campaigned for the Republican candidate, John C. Fremont during the presidential elections. However, John lost to Democrat, James Buchanan.
During the 1950’s he provided weapons to those guarding the abolitionist settlers who were engaged in combat. These rifles were shipped in cartons which were labelled ‘Bibles’. Thus, the weapons came to be known as ‘Beecher’s Bibles’.
President Abraham Lincoln sent Henry in 1863, in the middle of the Civil War, to usher support for the “Union cause” in Europe, as he was concerned that England might support the South.
Beecher was able to change the notions of the Europeans in his favour. Since, he played a Herculean role in the Civil War, he was invited to address a gathering at Fort Sumter in South Carolina, where the national flag would be hoisted.
In the words of Lincoln, “If it had not been for Beecher there would have been no flag to raise.” Such was the honour and gratitude bestowed upon him.
As a social activist, he assisted in the temperance movement, which was aimed at opposing the consumption of alcoholic beverages. He also reinforced the women’s suffrage movement, and became the first president of the American Woman Suffrage Association in 1869.
Continue Reading Below 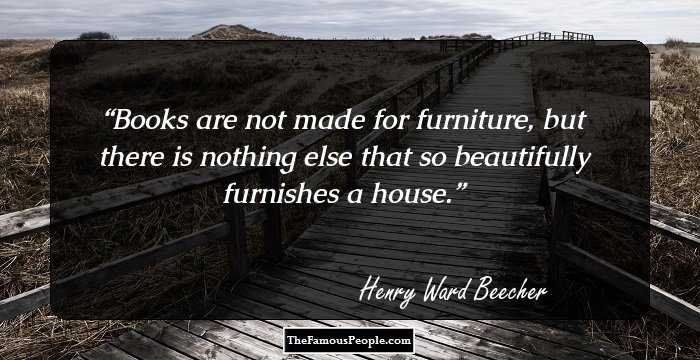 Quotes: Books
The Tilton Scandal
Elizabeth Tilton confessed to Theodore Tilton in 1870, that she had an affair with Beecher for a while. Shocked by the deceit of his friend and associate, Theodore reported this to ‘Woodhull and Claffin weekly’, owned by Victoria Woodhull.
Victoria and Henry could never see eye to eye as he often rebuked Victoria’s advocacy of “free love” during his sermons. The article was titled ‘The Beecher-Tilton Scandal Case’ and published in 1872.
The article caused mayhem; according to the article - the man who denounced the doctrines of “free love” had been practicing it behind closed doors. Though, he had been called as flirtatious and labelled a womaniser before, but this news came as a surprise for many congregants.
In 1873, Theodore sued Beecher on charges of adultery and a year later filed for divorce. However, Elizabeth Tilton took the blame for the affair with Henry receiving full support from his wife and family.
Beecher’s trial began two years after it was filed. It ended with a hung jury and the charges didn’t alter his life much. He still continued to preach at gatherings and a sum of a hundred thousand dollars was awarded to him by the Congregationalists.
Major Works
His contribution towards opposing the ‘Fugitive Slave Act’ of 1850 is deemed his greatest work. He spread word to claim the freedom of slaves with force and advised Abraham Lincoln to emancipate slaves. He provided assistance in the reconstructive measures of the state government in the South.
Not only was he an eminent speaker but also an impactful writer. He worked as an editor of the Congregational newspaper, ‘Independent’ from 1861 to 1863. He became an author in 1868 with his novel ‘Norwood, or Village Life in New England’.
Personal Life & Legacy
He met Eunice Bullard, the daughter of a reputed physician, during his years in Amherst College. The couple got engaged on 2nd January, 1832.
In 1837, after five long years, they got married. Their marriage was reported to be unsuccessful by several friends close to the couple. Henry spent long hours away from home, and his wife was mostly jealous because of the attention he received from women.
The couple had eight children from their marriage. Unfortunately four of their children died. As years went by, Beecher’s several extra-marital affairs unravelled. The couple hardly had anything left in their marriage but Eunice supported her husband publically repudiating such allegations.
Beecher died in his sleep on 8th March 1887 after suffering from a stroke. His death was mourned throughout America and his body was buried at Green-Wood Cemetery in New York.
In his honour, the ‘Henry Ward Beecher Monument’ was built by John Quincy Adams Ward in 1891 at the Borough Hall Park in Brooklyn. In 1959, it was shifted to Cadman Plaza in Brooklyn.
Trivia
Edna Dean Proctor, the co-author of Henry’s sermon book, told a friend that at their first meeting Beecher had raped her. Contrary to her statement, Henry claimed it wasn’t rape but consensual intimacy. Though speculations regarding the incident became a matter of gossip for many, the duo secretly continued their affair for over a year after the controversy.