DID WE MISS SOMEONE?
CLICK HERE AND TELL US
WE'LL MAKE SURE
THEY'RE HERE A.S.A.P
Popularity Index
313
Writers #544
Quick Facts

Who was Harriet Beecher Stowe?

Harriet Beecher Stowe was an American author and social reformer. She was born at a time when the United States was experiencing a great deal of societal changes. Stowe had witnessed the cruelties of slavery firsthand and was active in the same social circles as many other abolitionists of the time. Her thoughts were greatly influenced by these interactions and experiences. She decided to write something about the slavery at the request of her family. She believed that her actions could make a positive difference and her words could change the world. Stowe became famous especially for ‘Uncle Tom’s cabin’, a novel published in 1852, which portrayed the evils of slavery. It shook the nation’s consciousness on the inhumanity of slavery. Her landmark novel also helped in bridging the gap between North and South America over the issue of slavery. Her achievements have earned Stowe an honored place in America’s history. Her exclamation, ‘I will write something, I will if I live’, has echoed through the years to reach the countless people who have read her works. Gemini Writers
Women Writers
American Writers
American Female Writers
Childhood & Early Life
She was born to a religious leader Rev Lymond Beecher and his wife Roxanna Foote Beecher and was the sixth of eleven children. Her mother was a deeply religious woman and an abolitionist who passed away when she was just six. Her father remarried and the family’s new mother soon had three more children.
She often skipped the strict religious atmosphere of home by visiting her aunt Harriet Foote, and her grandmother Roxana Foote. There, she learnt the domestic arts of sewing and knitting and also had more access to books, novels and poetry.
She began her formal education at Sarah Pierce’s Litchfield Female Academy where she studied language and mathematics along with other things. There, she met Sarah P. Willis who later wrote under the pseudonym ‘Fanny Fern’.
In 1831, she moved to Cincinnati, Ohio, to join her father at Lane Theological Seminary. She also joined the Semi-colon club, a literary salon and social club, whose members included the Beecher sisters. She published several stories through it, which were about the New England people and the life she knew before she came to Cincinnati. 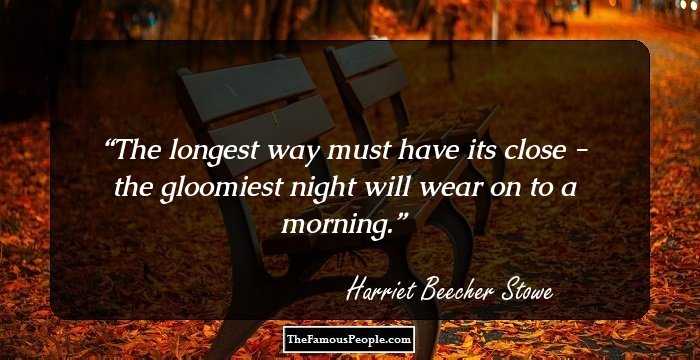 Gemini Women
Career
In 1850, she moved with her family to a home near the campus of Bowdoin College in Brunswick, Maine. In the same year, she approached Gamaleil Bailey, editor of the weekly anti slavery journal ‘National Era’, to share her plans for writing a story about the problems of slavery.
In June 1851, the first installment of ‘Uncle Tom’s Cabin’ appeared in ‘The National Era’. Its emotional depiction of the impact of slavery captured the nation’s attention and caused uproar in South regarding abolition of slavery.
On November 25, 1862, she traveled to Washington DC during Civil War and met the then President Abraham Lincoln and she claimed to have a real funny interview with the President.
In 1870s, she embarked on a reading tour for the American Literary Lecture Bureau of Boston. During her reading tours and travels in Europe she met many fellow writers including George Eliot, Robert Browning and his wife Elizabeth Barrett Browning, Lord George Gordon Byron and his wife Anne Isabella Milbanke- Lady Byron. 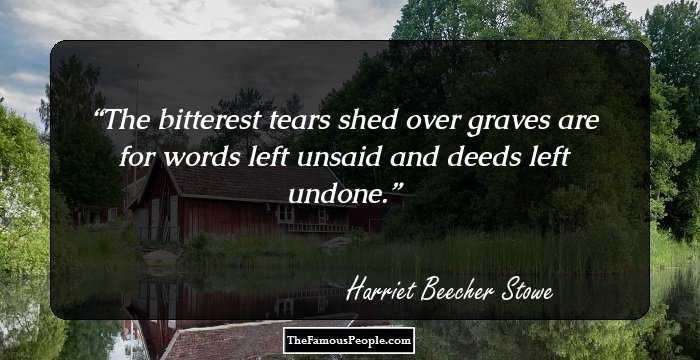 Major Works
In 1852, she authored ‘Uncle Tom’s cabin’, an anti-slavery novel that laid the groundwork for the civil war. It ignited the firestorm of protests from defenders of slavery. It garnered much praise from the abolitionists and was the first widely read political novel in the United States.
In 1859, her historical novel, ‘The Minister’s wooing’, was published. It further highlighted the issue of slavery and critiqued the Calvinistic theology. It combined comedy with regional history to show the convergence of daily life, slavery and religion in post-revolutionary England.
Among her other major works were ‘Dred: A tale of the great dismal swamp’ (1856), ‘The pearl of Orrs Island: A story of the coast of Maine’ (1862), ‘Palmetto leaves’ (1873), ‘Queer little folks’ (1897) etc.
Awards & Achievements
She was inducted in the National Woman’s Hall of Fame in 1896.
Continue Reading Below
She is honored with a feast day on the liturgical calendar of the Episcopal Church, USA on July 1.
In June 2007, a stamp was issued in her honor by the United States Postal Service.
In 2010, she was proposed by the Ohio Historical Society as a finalist in a statewide vote for inclusion in Statuary Hall at the United States capitol (the meeting place of the United States Congress). 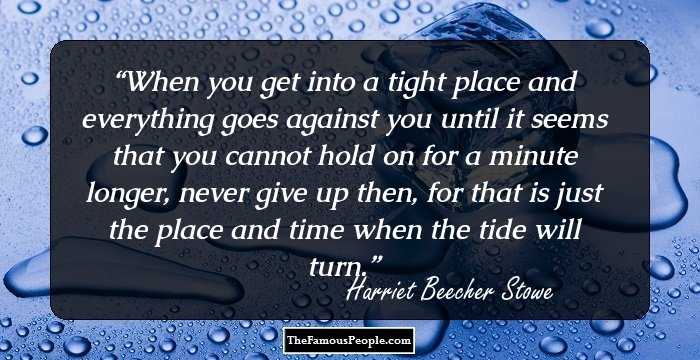 Quotes: You, Never, Time, Will
Personal Life & Legacy
During her association with the Lane Theological Seminary, she joined the Semi-colon club where she met Calvin Ellis Stowe, a widower and professor at the seminary. They married on July 6, 1836 and had seven children together including twin daughters.
In 1832, when the Stowe family moved to Cincinnati, they moved to a house which was a part of the former Lane Seminary and lived there for many years. Now the house is owned by the Ohio Historical Society and is operated by volunteers with the ‘Friends of the Harriet Beecher Stowe house Inc.’
In 1880s, she moved to Mandarin, Florida along with her family where she founded an Episcopal Church, ‘Church of our Saviour’, with her husband. The church contains a Stowe Memorial stained glass window created by Louis Comfort Tiffany.
She rented the Stonemore House with her husband while he was a professor at Bowdoin College. It was here that she wrote ‘Uncle Tom’s Cabin’. In 2001, Bowdoin College purchased the house and raised the necessary funds to restore the house which is now open to public.
During the latter part of her life, she moved to a house in Hartford, Connecticut where she spent last 23 years of her life. In 1970, it was listed on the National Register of historic places, and declared a National Historic landmark in 2013.
Trivia
She is an ancestor of author Patricia Cornwell.
You May Like 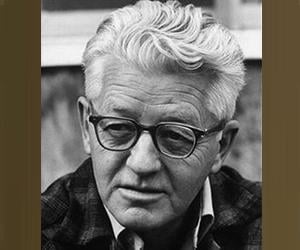