Henry Havelock Ellis, better known as Havelock Ellis was a British physician and psychologist who co-authored the first known textbook on homosexuality in English. He essentially worked on the field of human sexuality and developed the concepts of narcissism and autoeroticism which were valuable contributions to the field of psychoanalysis. His studies covered what is today known as transgender phenomena. As a young man he was very confused about his career choice and had worked on a ship and as a school teacher. Finally he decided to become a physician and take up the study of sex. He never had a regular medical practice and devoted his life to research and writing. Along with John Addington Symonds he co-authored the first textbook on homosexuality. At that time homosexuality was regarded as a disease or a crime that only sick and depraved minds indulged in. Ellis was one of the first sexual researchers who studied the concept from an objective point of view and not as a taboo. He was a social reformer and a member of the socialist debating group, The Fabian society, a splinter group of Fellowship of the New Life which advocated simple living and vegetarianism. He was acquainted with other socialists like George Bernard Shaw and Edward Carpenter. Phoebe Waller-B...
Writers #2074
Physicians #194
DID WE MISS SOMEONE?
CLICK HERE AND TELL US
WE'LL MAKE SURE
THEY'RE HERE A.S.A.P
Quick Facts

British Celebrities
British Men
Male Writers
British Writers
Male Physicians
Childhood & Early Life
He was the eldest child of Edward Peppen Ellis and Susannah Mary. He had four sisters. His father worked as a sea captain.
He went to local schools as a child and was a voracious reader. He was deeply influenced by the writings of philosopher Ernest Renan, and the poets, Percy Bysshe Shelley and Algernon Charles Swinburne. He attended French and German College near Wimbledon. 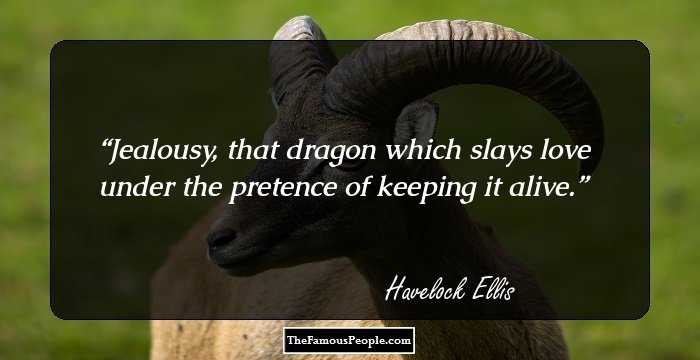 The Best Black Actresses Of All Time
Career
He sailed to Australia on his father’s ship in 1875 and found employment as a master at a private school in Sydney. However, he was fired when his lack of experience was discovered. He made his living working as a private tutor before obtaining a position as a master at a grammar school.
While in Australia he read ‘Life in Nature’ by James Hinton who wrote on religious, social, and sexual matters. Reading this book provided some clarity to Ellis’ confused mind and he experienced a spiritual transformation.
He returned to England in 1879 with the aim of pursuing medical education. He wanted to study sexual issues and felt that he should first acquire knowledge about the human anatomy. He joined St. Thomas’s Hospital as a medical student.
A socialist, he became a member of the organization, Fellowship of the New Life which was founded by Thomas Davidson in 1883. Other prominent members of the group included Edith Lees, Edward Carpenter, Isabella Ford, and Frank Podmore.
Along with other members of the group, Ellis formed a socialist debating group the Fabian Society in 1884. It was named so in the honour of the Roman General, Quintus Fabius Maximus.
His first book, ‘The New Spirit’ was published in 1890. He discussed the sciences of anthropology, sociology, politics, feminism and disappearance of war in this book.
He co-authored the book ‘Sexual Inversion’ with John Addington Symonds in 1896. The book was originally written in German and later translated into English. The authors explored homosexual relationships in this work.
The book generated much controversy due to its subject matter. The authors had studied homosexuality from an objective point of view, and not as a crime or disease as was believed in those times. This caused outrage among the conservative Victorian society.
In 1906 he published the book ‘Erotic Symbolism, The Mechanism of Detumescence’ in which he discussed his own fetish, undinism or urolagina. He stated that when existing in only a slight degree, it must be regarded as a normal sexual emotion.
He also studied the concepts of autoeroticism and psychoanalysis which were further developed later on by Sigmund Freud. His contributions to the field of psychoanalysis have been immense.
He conducted pioneering research in what is today known as transgender identity. He was one of the first researchers to differentiate the concept of transgender identity from sexual inversion and homosexuality.
He joined several intellectuals of his era in their belief in the field of eugenics which advocated the examining of biological and psychological traits of breeding humans which could help in improving the quality of human population. He even served as the vice-president of the Eugenics Education Society. 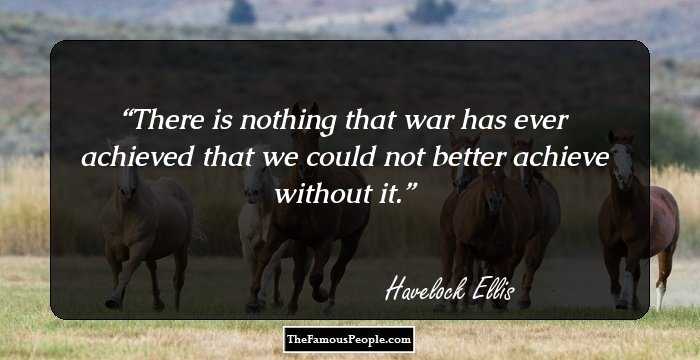 Quotes: War
Major Works
His book, ‘Sexual Inversion’ which he co-authored with John Addington Symonds was the first medical textbook on homosexuality. The book contained 33 original cases of homosexual men and women, and explored the concept from intellectual and emotional viewpoints. It was considered a text for both students and historians of psychiatry and sexuality.
Personal Life & Legacy
He married the writer and feminist Edith Lees in 1891. Their marriage was very unconventional as Ellis suffered from impotence and Lees was openly lesbian. They had an open marriage and Lees had affairs with several women.
After the death of his wife he developed relationship with a woman called Francoise Lafitte. He was interested in what he called ‘undinism’—deriving sexual pleasure by watching women urinate. 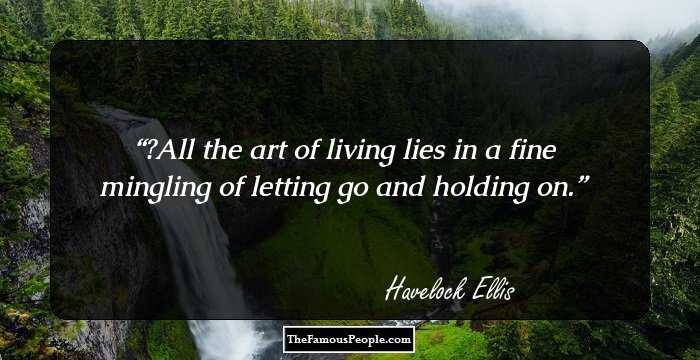 Quotes By Havelock Ellis | Quote Of The Day | Top 100 Quotes

See the events in life of Havelock Ellis in Chronological Order