Harry Edward Styles is an English singer and songwriter, best known as a member of the famous pop rock band ‘One Direction.’ Blessed with a penchant for music, Styles immersed himself in the field of music at a young age. He made his debut when he auditioned for a spot in the show ‘The X Factor.’ Styles’ natural flair and understanding of music made him a favorite among the judges. Though he could not make it to the ‘judge’s houses’ round, he was roped in as a member of the pop rock band ‘One Direction.’ Despite being the youngest member of the boy band, Styles soon became a favorite among the fans because of his skills, appearance, and demeanor. During its five outings ‘One Direction’ broke several records, becoming the only boy band to have its first four albums debut at number one in the United States. Also, it became the first boy band in US chart history to land two number-one albums in a calendar year. Following his self- imposed hiatus Styles pursued his solo career, signing a record deal with ‘Columbia Records.’ Additionally, Styles has also appeared in television and film, including the ‘Nickelodeon’ series ‘iCarly,’ documentary concert film ‘One Direction: This Is Us,’ and the feature film ‘Dunkirk.’ Sophia Grace Br...
DID WE MISS SOMEONE?
CLICK HERE AND TELL US
WE'LL MAKE SURE
THEY'RE HERE A.S.A.P
Quick Facts

British People
Pop Singers
British Men
Tall Celebrities
Tall Male Celebrities
Childhood & Early Life
Harry Edward Styles was born on February 1, 1994, in Redditch, Worcestershire, to Anne Cox and Desmond ‘Des’ Styles. He has an elder sister named Gemma. His parents got separated when he was seven.
Styles spent most of his growing up years in Holmes Chapel, Cheshire with his mother and sister. He received his education from ‘Holmes Chapel Comprehensive School.’
Ever since he was a child, Styles was fascinated by music. He enjoyed singing and even performed as the lead singer for his school band, ‘White Eskimo,’ which won several competitions. Freddie Mercury, Elvis Presley, and ‘The Beatles’ were Styles’ earliest influences. He even worked part-time at the ‘W. Mandeville Bakery’ in Holmes Chapel to support himself. 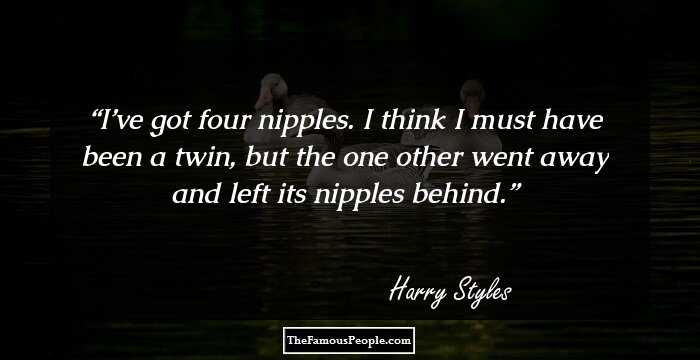 Continue Reading Below
Career
Harry Styles began his music career in 2010 when he auditioned as a solo candidate for the seventh series of the British televised singing competition ‘The X Factor.’ Though he could not make it to the finals, he was selected along with four other fellow competitors to form a new group act for the remainder of the competition.
Styles named the group ‘One Direction.’ The group’s first song, which was also their qualifying song at ‘judge’s houses’ round, was an acoustic version of ‘Torn.’ Such was the brilliance of their performance that they soon gained popularity in the UK.
‘One Direction,’ one of the biggest contenders for the coveted title and people’s favorite, finished third in the seventh season of ‘The X Factor.’ Soon after, ‘One Direction’ was signed by Cowell’s ‘Syco Music Records’ for a contract worth £2 million.
In February 2011, the group came up with its book ‘One Direction: Forever Young’ which gave a first-hand account of the band’s ‘X-Factor’ story. It topped the ‘Sunday Times Best Seller’ list. Subsequently, they went on the ‘X-Factor Live Tour,’ performing throughout the UK.
After months of recording in various cities including Stockholm, London, and Los Angeles, ‘One Direction’ came up with its debut album ‘Up All Night’ in 2011. The album debuted at number two on the ‘UK Albums Chart’ and ultimately became the UK's fastest-selling debut album of 2011. Their debut single ‘What Makes You Beautiful’ debuted at number 1 on the ‘UK Singles Chart.’
‘Up All Night’ debuted at number one on the ‘US Billboard 200,’ selling 176,000 copies in its first week. As per reports by ‘IFPI,’ ‘Up All Night’ was the third global best-selling album of 2012 with sales of 4.5 million copies.
The stupendous success of its first studio album and debut single led ‘One Direction’ to come up with its follow-up album ‘Take Me Home’ in 2012. It topped the charts in more than 35 countries. Following the footsteps of its predecessor, ‘Take Me Home’ took the number one spot on the ‘US Billboard 200’ chart, thus making ‘One Direction’ the first group to top the ‘Billboard 200’ with its first two albums. Also, it became the first boy band in US chart history to land two number-one albums in a calendar year.
The band’s debut album ‘Up All Night’ and its follow up ‘Take Me Home’ became the third and fifth best-selling albums of 2012 in the United States, respectively, making the band the first act to place two albums in the year-end top five in the ‘Nielsen SoundScan’ era.
Take Me Home’s lead single ‘Live While We're Young’ showed up at the top ten list in almost every country it charted in. It recorded the highest one-week opening sales figure for a song by a non-US artist.
Continue Reading Below
In 2013, director Morgan Spurlock came up with a documentary of the band titled ‘One Direction: This Is Us’ which gave a sneak peek of the band’s routine. The film grossed more than $68 million worldwide.
‘One Direction’ ended the year 2013 with the release of its third studio album ‘Midnight Memories’ in November. Though it opened to mixed reviews by the critics, the album nevertheless fared well, and became the best-selling album of 2013, selling more than four million copies.
A year after its third studio album, ‘One Direction’ came up with its fourth album ‘Four’ in November 2014. The album debuted at number one in 18 countries, including the United Kingdom, Australia, and the United States. Its lead singles, ‘Steal my Girl’ and ‘Night Changes’ achieved platinum status in the US and gave the band its tenth and eleventh UK top-ten hits.
Replicating the success of the band’s previous three studio albums, ‘Four’ became the band’s fourth consecutive album to sell in excess of 1 million copies in the United States. Also, it made ‘One Direction’ the first band to have its first four albums debut at number one in the United States.
In March 2015, Zayn Malik, a member of ‘One Direction,’ left the group. Nevertheless, the band continued working on its fifth album, which was also the band’s final album before its self-imposed hiatus. The album ‘Made in the A.M.’ released in November 2015 to favorable reviews from critics. It debuted at number one on the ‘UK Albums Chart’ and at number two on the ‘US Billboard 200.’ Its singles, ‘Drag me Down,’ ‘History,’ and ‘Perfect’ reached the top 10 spots in a number of national charts.
Following the band’s hiatus, Styles moved on to pursue a solo career in music. In June 2016, he signed a record deal with ‘Columbia Records’ as a solo artist. Additionally, he collaborated with several other songwriters. He contributed lyrics to Snow Patrol's ‘Johnny McDaid’ and OneRepublic's ‘Ryan Tedder.’ He also collaborated with artists like Ariana Grande and Michael Buble.
Harry Styles’ other projects include his acting debut for Christopher Nolan's action-thriller ‘Dunkirk’ which released in 2017. In the film, he appeared alongside actors like Tom Hardy, Mark Rylance, Cillian Murphy, and Kenneth Branagh.
His self-titled debut solo album was released in May 2017. It opened at the top spot at the ‘US Billboard 200.’ It also did well in several other countries like the UK and Australia. The album was certified platinum in the US and four other countries, as it was the ninth best-selling album of 2017. He also embarked on a tour called ‘Harry Styles: Live on Tour’ through North & South America, Europe, Asia, and Australia from September 2017 to July 2018. 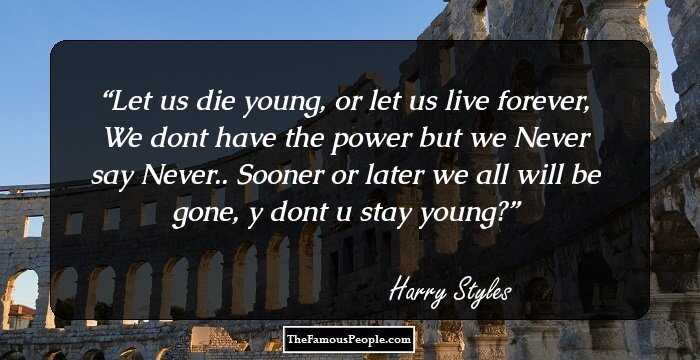 Major Works
Harry Styles received his breakthrough when he became a member of the boy band ‘One Direction.’ The band went on to achieve several impressive feats and created masterpieces, each of which made it to the top spot. ‘One Direction’ became the first boy group to have its first four albums debut at number one spot in the United States. Also, it became the first boy band in US chart history to land two number-one albums in a calendar year. Each of its first four albums did exceedingly well at the charts.
Awards & Achievements
‘One Direction’ has won several awards, including seven ‘Brit Awards’ and four ‘MTV Video Music Awards.’ 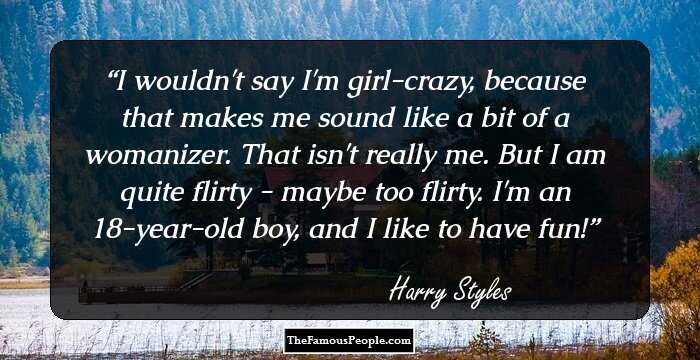 Harry Styles has a Casanova image and is known for his various romantic link-ups. In 2011, he dated television presenter Caroline Flack. Their relationship hit the headlines globally due to the age difference between the two, Styles being just 17 and Flack 32 at the time. Their relationship ended in 2012.

In December 2012, Styles started dating international pop star Taylor Swift. The two broke up in January 2013. He later dated Kendall Jenner and Nadine Leopold. He began dating Olivia Wilde in late 2020, but they broke-up in 2022.

A long-standing advocate of equality and an ardent supporter of LGBT community, he often waives the rainbow flag (LGBT pride flag) on stage. He has also supported organizations, such as ‘Little Princess Trust’ and ‘Young Survival Coalition.’

Quotes By Harry Styles | Quote Of The Day | Top 100 Quotes

See the events in life of Harry Styles in Chronological Order