Being related to someone who is the heart throb of half the world isn’t easy. Ask Gemma Styles and she can write a book on it! It’s a great thing then, that she is a self-established and quite a successful writer. But, just as Rome wasn’t built in a day, all this didn’t come to Gemma Styles overnight. Elder sister to the very popular and much adored, Harry Styles, Gemma grew up in his shadows rather than it being the other way round. She is quirky, witty and has a mind of her own. Despite having a brother who became popular and successful while still in his teens, her love, adoration and sheer pride for him never wavered even one bit. A successful freelance journalist herself, Gemma does not and has never needed her brother’s support or his fame to reach where she is today. A graduate from the Sheffield Hallam University, Gemma is vouched for by her mother as well as her brother to be the wise one and the smarty pants in the family. She received a First Class Honors Degree and a Qualified Teacher Status in Genetics from the University. As of today, she works as a freelance journalist for top media outlets, such as ‘The Debrief’ and ‘MTV UK’ and has appeared on shows like ‘Whine About It’. Gemma Styles has a huge following on Instagram. 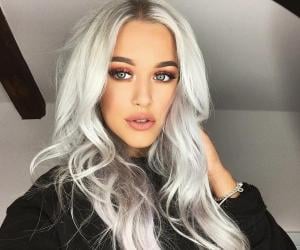 British People
Female Instagram Stars
Female Social Media Stars
British Instagram Influencers
British Internet Celebrities
Career
Like her younger brother, Gemma’s forte includes being good with words as well. But these words aren’t melodies or tunes. These are words penned by a writer and not a singer or lyricist. Yes, Gemma is a writer and that too not just any! A freelance writer and blogger on top of her game, Gemma began working as a freelance journalist for top media outlets in May 2015.
Recommended Lists:

British Female Instagram Stars
British Social Media Female Celebrities
Sagittarius Women
Writing, though her bread and butter, isn’t the only profession that gets her the bucks. Gemma has got some singing gene in her too, as she released her own album in 2013. Besides this she was even roped in as a model by the British brand, Fudge Urban, in 2015 for a funky shoot that involved glitter and sparkle.
You May Like

Who Is The Most Popular BTS Member?
Continue Reading Below
Controversies & Scandals
Controversies come in a package deal with being a celeb’s sister. For Gemma the limelight and the controversies began the moment her younger brother shot to fame. Right from his visits to her university and him considering her nothing less than a reverential figure in his life, there were and are so many people who believe she had it all easy because of a famous brother.
Hate mails and nasty comments over social media have plagued Gemma’s life since long, but these have in no way broken her spirit and zeal. One of these scandals even involved her own brother being all protective towards her during a live concert. In the said concert, Gemma had got along a date and being the protective brother, Harry announced this during his live performance to let the date know that he was watching his sister’s back (isn’t that adorable). This proved to be quite embarrassing and even garnered a lot of attention from the media.
Personal Life
Gemma Styles was born on December 3, 1990, in Worcestershire, England, to Des Styles and Anne Cox. There was a little bump in the road for both Harry and Gemma in their childhood which came in the form of their parents’ divorce. However, this did not have any traumatic effect on them and neither was their childhood marred with any bad memories because of this. In fact, Gemma shares a very loving and healthy relationship with her mother and her step-father even today.
Also, thankfully all the hate from the fan base and the negativity surrounding their relationship has in no way hampered the sibling relationship either. In fact, the two of them give sibling relationship goals to people world over through their adorable pictures and statutes on social media. Such is their love for each other that it has even got translated in the form of tattoos on their bodies. Where Harry has three tattoos based on Gemma (an iced gem, a letter "G" on his arm and her name in Hebrew), Gemma has four tattoos dedicated to her lil brother (the letter "H" in Morse code, the letter "A", a robin bird and a palm tree)
Besides being a daughter and a sister, Gemma has been busy in the love department as well. Currently, she is in a relationship with Michal Mlynowski.