Advanced Search
Harold Macmillan was an English statesman from the ‘Conservative Party’ who served as the prime minister of the UK from 1957 to 1963. He was known by the nickname ‘Supermac,’ owing to his charismatic attributes. He was born and raised in London and completed his education from the ‘University of Oxford.’ He was always an admirer of the policies of liberalism adopted by a few British politicians of that era. He fought for his country in the First World War. Following this, he ventured into politics. He joined the ‘Conservative Party’ but exhibited a liberal point of view. Thus, the supreme leaders of his party were unhappy with him. Despite this, he won a seat from Stockton-on-Tees in 1924. Although he lost in 1929, he came back to power two years later. He rose through the political ranks. By the mid-50s, he had become the fittest prime ministerial candidate from the ‘Conservative Party.’ In 1957, following the resignation of Anthony Eden, Harold became the prime minister. Due to the ongoing political crisis in his party, he resigned in 1963. He passed away in December 1986. British Celebrities
British Men
Eton College
The University of Oxford
Tall Celebrities
Childhood & Early Life
Harold Macmillan was born Maurice Harold Macmillan, on February 10, 1894, in Chelsea, London, UK. His father, Maurice Crawford Macmillan, worked as a publisher. His mother, Helen Belles, was an artist and a socialite. He was the youngest child in the family and had two elder brothers.
Their family business, ‘MacMillan Publishing,’ was founded by Harold’s grandfather, Daniel Macmillan.
Both his parents were scholars. The family ensured their children received top-notch education. While his father was mostly busy with the family business, Harold’s mother took care of his education.
Harold initially attended ‘Mr. Gladstone’s Day School’ and then joined ‘Summer Fields School.’ He also attended ‘Eton College,’ a boarding school, but was often plagued with serious illnesses such as pneumonia. During his final year at the school, he was homeschooled by the teachers.
As a teenager and an adult, Harold was a keen admirer of liberal politicians such as Henry Campbell-Bannerman, who was the prime minister of UK when Harold was growing up.
After completing school, Harold attended ‘Balliol College,’ one of the colleges of the prestigious ‘University of Oxford’ and joined many political societies. By the time he was in college, his views had turned into a mixture of moderate liberalism, moderate conservatism, and Fabian socialism. He completed college just before the First World War broke out and then enlisted in the army as a volunteer. 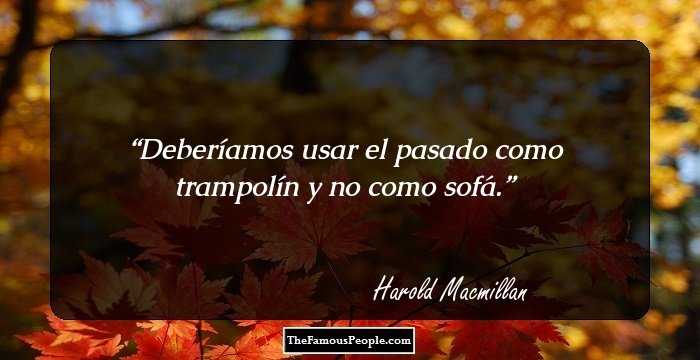 Continue Reading Below
Early Career & Politics
Harold served in the World War as one of the grenadier guards in early 1915. He fought for UK in France, which was known as the most dangerous war zone back in those days. The zone had a high casualty rate.
During the course of the war, Harold was wounded thrice. He was once fatally wounded. Harold spent most of the first two years of the war in hospitals, recovering from his wounds.
When the World War was at rest in November 1918, Harold was still recovering from his war injuries. During those years, Harold grew as an effective leader and openly criticized nationalist leaders such as Rab Butler and Harold Wilson, as they did not participate in any military service when the country was at war.
He ventured into politics once the war was over. He then contested as a member of parliament (MP) from Stockton-on-Tees in 1924. After a one-sided election, Harold became the MP from the zone. He spent a lot of money for the campaign.
He became the MP despite the troubles, but he could not continue in the next elections. His zone was suffering from a high level of unemployment, which cost him his seat in the parliament. However, when the new candidate resigned in 1931, Harold got his seat back.
The 1930s were crucial for his political career, as this was the time he became ideologically close to Winston Churchill. He openly supported Churchill’s stance on non-appeasement, and this support did not go unrewarded. As a result, he rose through the ranks in the ‘Conservative Party’ and became an experienced statesman.
Toward the late 1930s, he was made the parliamentary secretary to the ‘Ministry of Supply.’ His job had him visiting major political leaders in North Africa. He gained experience and secured good relations with people there.
During the later years of the Second World War, he had become very close to Churchill. This helped him gain significance in national politics. In 1945, he became the MP from Bromley.
Churchill’s government made him the minister of housing and local government in 1951. He then became the minister of defense and a foreign secretary.
Continue Reading Below
Prime Minister
In the mid-1950s, the UK faced the ‘Suez’ debacle that led to the end of the political careers of many British statesmen. However, Harold’s political understanding had him reaping benefits out of it, despite the fact that he had also been responsible for the debacle.
The erstwhile prime minister, Anthony Eden, decided that resignation was the best course of action in such circumstances, and he subsequently resigned. Harold Macmillan emerged as the top candidate for the job. He became the prime minister on January 10, 1957.
His liberal mindset and his anti-appeasement policies quickly made him a respected leader of the country. He made up for the financial losses suffered by the ‘Conservative Party’ during the ‘Suez’ debacle. He also led his party in the 1959 general elections and made sure that his party had the upper hand in the parliament.
He supported the decolonization of Africa. He embarked on a historical tour called the ‘Winds of Change Tour’ across Africa in 1960. In the early 1960s, he made several popular speeches on the virtues of independence and granted freedom to several African countries such as Sierra Leone, Ghana, and Uganda.
However, The prime ministerial seat was not a bed of roses. His second term was plagued with several crises. The ‘Conservative Party’ was shaken after Britain’s application to the ‘European Economic Community’ (EEC). The party could not take this blow and split up soon.
The general public was angry, and this led Macmillan to do something which was similar to a “political suicide.” He dismissed eight members of his cabinet in 1962, in what was known as the “Night of Long Knives.” Harold’s amateur handling of the troubles caused by a scandalous minister, John Profumo, was the final nail in the coffin of his political career. After a long struggle, he resigned from his post in October 1963.
Personal Life & Death
In April 1920, Harold Macmillan married Lady Dorothy Cavendish, who belonged to a respected British royal family from Devonshire.
Dorothy started an affair with ‘Conservative’ politician Robert Boothby. The affair began in 1929, and when Harold wanted to divorce his wife, his political mentors suggested that it would create a bad impression on the public.
Thus, Harold did not divorce her. They lived separately for most of their married life. The couple had four children.
Lady Dorothy died in 1966 after being married to Harold for 46 years. Rumors claimed that Sarah Heath, their youngest daughter, was not Harold’s biological daughter. However, recent studies have claimed that she was indeed Harold’s daughter.
Harold died at ‘Birch Grove,’ the family mansion in East Sussex, on December 29, 1986. He was 92 years old at that time. His great career was addressed by US President Ronald Reagan.
Awards & Honours
In 1976, Harold Macmillan was awarded with the ‘Order of Merit.’ In addition, he was honored with the ‘Freedom Medal’ from the ‘Roosevelt Study Center’ two years before his death.
During the course of his political career, Harold was awarded with honorary degrees by prestigious universities such as ‘Oxford,’ ‘John Hopkins,’ ‘DePauw,’ and ‘Cambridge.’

See the events in life of Harold Macmillan in Chronological Order