Georges Bizet was a Romantic era French composer best known for his final work, ‘Carmen,’ an opera in four acts. Trained at the Paris Conservatoire under well-known teachers like Antoine François Marmontel, Pierre-Joseph-Guillaume Zimmermann, Charles Gounod and Fromental Halévy, he won the prestigious Prix de Rome at the age of nineteen. Thereafter, he spent three years in Rome before returning to Paris, where he spent the rest of his short life, composing music. Although he was a great pianist, he hardly ever performed in public and spent his time and energy on composing marvelous pieces. Unfortunately, very few of them received attention during his lifetime and many of the manuscripts were lost in the intervening years. It was only from the end of the nineteenth century that his works started being rediscovered or revived. However, their true worth started being recognized only from the early twentieth century. Today he has been acclaimed as a brilliant composer, whose early death was a tremendous loss to French music. Erik Satie
Composers #273
Musicians #2157
DID WE MISS SOMEONE?
CLICK HERE AND TELL US
WE'LL MAKE SURE
THEY'RE HERE A.S.A.P
Quick Facts

French People
Male Musicians
Male Composers
French Composers
French Musicians
Childhood & Early Years
Georges Bizet was born on 25 October 1838 in Paris. Although he was registered as Alexandre César Léopold, for some unknown reason, he was baptized on 16 March 1840 as Georges and from that point he began to be known by that name.
His father, Adolphe Armand Bizet, was originally a hairdresser and wigmaker but later he took up music teaching as his vocation. He also composed a few pieces and at least one of them was published.
His mother, Aimée Léopoldine Joséphine née Delsarte, was an accomplished pianist. She came from an impoverished, but highly cultured family. Her brother, François Delsarte, was a distinguished singer, who used to perform at the courts of King Louis Philippe and Emperor Napoleon III.
Georges, their only child, showed an aptitude for music early in his life. He probably received his first piano lesson from his mother. Standing at the door, listening to his father giving music lessons to his students, he learned to sing difficult songs accurately from memory.
In the same way, he also learned to identify and analyze structure of chords, some of which were quite complex. This convinced his parents that their son was ready for formal training at the Conservatoire de Paris even though he was yet to reach ten, the minimum age for admission to the Conservatoire.
Subsequently, at the recommendation of François Delsarte, Georges appeared for an interview before horn virtuoso Joseph Meifred, who was also a member of the Committee of Studies of the Conservatoire. Impressed by the boy’s skill, he agreed to bypass the age restriction and take him as soon as there was a vacant seat. 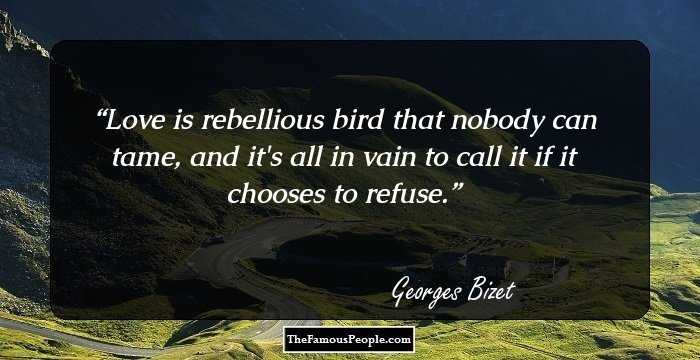 See the events in life of Georges Bizet in Chronological Order