DID WE MISS SOMEONE?
CLICK HERE AND TELL US
WE'LL MAKE SURE
THEY'RE HERE A.S.A.P
Popularity Index
Musicians #868
Conductors #7
Nadia Boulanger
Quick Facts

Francis Poulenc
The music teacher who taught leading musicians, composers and conductors like John Eliot Gardiner, Quincy Jones, Aaron Copland and Philip Glass, Nadia Boulanger is considered one of the best music teachers of the 20th century. She was also a world renowned composer and conductor who performed as a pianist and organist. Born into a musical family, music came naturally to her. It might come as a surprise that as a little girl Nadia found music repulsive as she was surrounded by music all day long! Gradually she overcame her repulsion and realized her talent for all things musical. She received lessons from some great teachers which helped to polish her natural skills. Her father was a renowned composer and the family lived comfortably. However, when her father died, the responsibility of providing for her mother and sister fell upon young Nadia’s shoulders and she took to teaching music to earn a livelihood. She was a keen composer and a highly skilled pianist. She became very popular playing in concerts which also added to her stance as a music teacher. She lived in an era marked by political turmoil and unrest. A kind hearted soul, she organized a charity along with her sister to help those affected by the war even as she juggled her busy career. French Women
Virgo Musicians
Women Composers
Women Musicians
Childhood & Early Life
She was born as Juliette Nadia Boulanger to Ernest Boulanger and his wife Raissa Myshetskaya. Ernest was a renowned composer and pianist who himself came from a family of famous musicians. She had one younger sister.
Both her parents were musically very active and little Nadia was irritated with music playing around her all day long. However, her attitude towards music changed when she was five and she began displaying her inherent musical talents.
She began receiving musical lessons and joined the Conservatoire in 1896 when she was nine. She also took private lessons from Vierne and Guilmant.
Her elderly father died in 1900 leaving behind a young wife and two daughters to fend for themselves. Her mother lived an extravagant lifestyle and thus Boulanger was determined to study well so that she could support her mother and little sister.
Even as a student she began giving organ and piano performances and earned money. She studied composition under Faure. 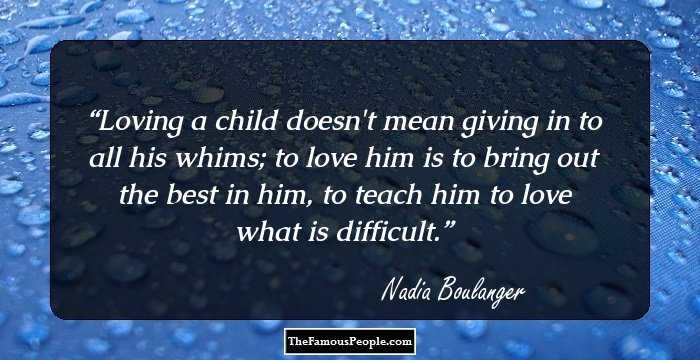 French Composers
French Musicians
French Women Composers
French Female Musicians
Career
She began giving private lessons from her home in 1904 though she herself was just a teenager. She also conducted weekly classes in analysis and sight singing.
In 1907, she became a teacher of piano at the newly created Conservatoire Femina-Musica and an assistant to Henri Dallier, the professor of harmony at the conservatoire.
She began performing piano duets with Pugno and in 1908 the two composed a song cycle, ‘Les Heures claires’ which was well received by the public.
She made her debut as a conductor in 1912 and led the Société des Matinées Musicales orchestra where she also performed as a soloist.
The 1910s was a period marked by political unrest and wars. Due to the war, public programs were reduced and she had to put her performing career on hold. She continued her work as a teacher.
Her younger sister Lili was deeply involved in war work and inspired by her she too joined her. Working together the two sisters created a charity that supplied food, clothing and money to soldiers who had been musicians before the war.
The French Music School for Americans opened in 1921 and she joined the program as a professor of harmony. By now she had a very hectic schedule that comprised teaching, performing and composing. She decided to focus more on the teaching job as it paid better than the others and she needed the money to take care of her mother and herself.
The New York Symphony Society along with Walter Damrosch and others arranged for her to tour the U.S. in 1924. She played solo organ pieces written by Lili and premiered Copland’s new Symphony for Organ and Orchestra. She returned to France in 1925.
She resumed conducting during the mid 1930s and made her Paris debut with the orchestra of the Ecole normale in a programme of Mozart, Bach and Jean Francaix. She also continued with her private classes.
Continue Reading Below
She recorded and released six discs of madrigals for HMV in 1937. This helped reach her music to a more wide spread audience and she received very good reviews from critics though some objected to the use of modern instruments.
She moved to New York in 1940 where she taught harmony, fugue, and advanced composition at the Longy School of Music. A couple of years later she began teaching at the Peabody Conservatory in Baltimore.
Over the 1950s she continued conducting and teaching, and also make four television films. She organized the music for the wedding of Prince Rainier of Monaco and the American actress Grace Kelly.
During her later years her eyesight and hearing began to fail though she remained active until the end of her life. 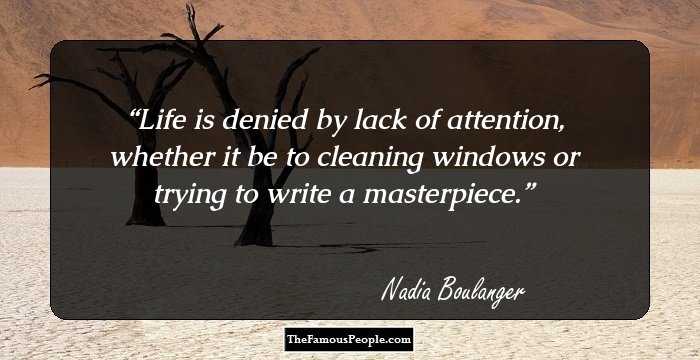 Virgo Women
Major Works
Nadia Boulanger was a highly influential teacher of music and also a very talented composer who became the first woman to conduct many major orchestras including the BBC Symphony, Boston Symphony and New York Philharmonic orchestras.
Awards & Achievements
She was presented with the Henry Howland Memorial Prize in 1962 in recognition of her achievement of marked distinction in the field of fine arts. 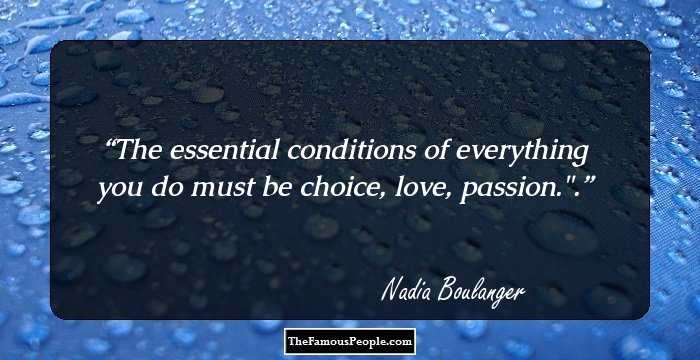 Quotes: You, Love
Personal Life & legacy
She was born into a family of great musicians and thus music was a passion she shared with her younger sister, Lili. The sisters were very close and Nadia deeply loved and admired Lili who unfortunately died young.
She lived a long and productive life over the course of which she tutored several pupils of whom many became her good friends. She was highly revered and loved by her students. She died in 1979 at the ripe old age of 92.
You May Like

See the events in life of Nadia Boulanger in Chronological Order