Gabriela Mistral was a woman with a multi-faceted personality—she was a poet, an educator, a diplomat and a feminist all rolled into one. She has the honour of being the first Latin American to win the Nobel Prize in Literature in 1945. She had a difficult childhood, and had to start working as a teacher’s aide by the time she was 15 in order to support herself and her mother. While working as an educator, she also started to write poetry, some of which were published in the local and national newspapers and magazines. The tragic death of her lover in 1909 influenced her to write Sonetos de la muerte which went on to win a national award for her when published years later. Her growing popularity as a poet also opened up newer avenues for her career growth as a teacher. She got many opportunities to teach at prestigious schools, and then gradually went on to become a college educator. Her rising stature in the international scenario made it impossible for her to remain in Chile for long. In the mid 1920’s, she represented Latin America in the Institute for Intellectual Cooperation of the League of Nations. She lived primarily in France and Italy between1926 and 1932. During this period, she also extensively toured many countries like Brazil, Argentina, the Caribbean, Uruguay, etc. She held a visiting professorship at Barnard College of Columbia University, worked briefly at Middlebury College and Vassar College. She published many articles in newspapers and magazines throughout the Spanish-speaking world. Maria Montessori
Poets #266
Educators #143
Writers #1874
7th April In History
DID WE MISS SOMEONE?
CLICK HERE AND TELL US
WE'LL MAKE SURE
THEY'RE HERE A.S.A.P
Quick Facts

Chilean Celebrities
Nobel Laureates In Literature
Poets
Educators
Chilean Women
Childhood & Early Life
Gabriela Mistral was born to Juan Ger�nimo Godoy Villanueva and Petronila Alcayaga. Her mother was of Basque descent while her father was a school teacher of Indian and Jewish descent. She also had one step-sister named Emelina who was fifteen years older to her.
She grew up in a world of poverty after her father abandoned his family leaving his wife and daughters to fend for themselves.She had begun to get her poems published in local newspapers from an early age. 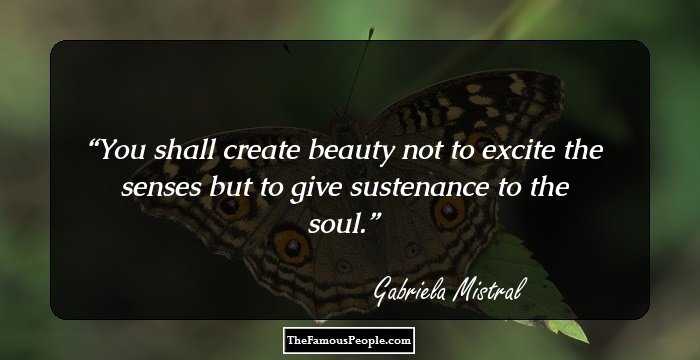 Quotes: You, Soul
Continue Reading Below
You May Like

The Best Black Actresses Of All Time
Career
Gabriela Minstral began her career as a teacher’s aide at the age of fifteen. In spite of her lack of a solid foundation in formal education, her sister helped her to get a teaching job.
The suicide of her lover, a railway worker named Romelio Ureta, affected her deeply and had a profound influence on her works.
Her growing popularity as a poet also helped her in rising from one position to another.
She got the opportunity to teach in a number of schools in various Chilean cities. The government of her country awarded her the title “Teacher of the Nation” in 1923.
As she became increasingly famous for her works in the fields of education and poetry, she received many invitations to attend conferences and make speeches.
She also represented Chile as an honorary consul in Brazil, Spain, Portugal and the US. 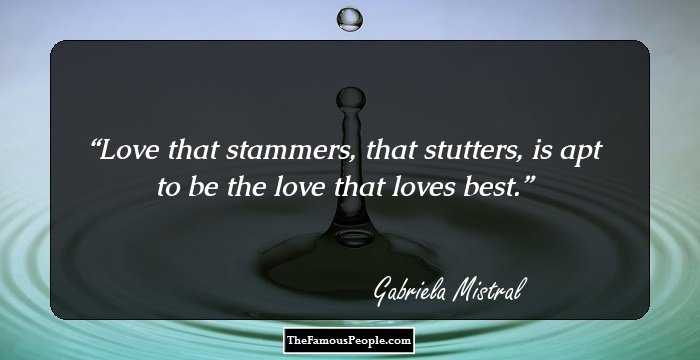 Quotes: Love
Awards & Achievements
In 1914, she was awarded the first prize in the Juegos Florales a national literary contest for her work Sonetos de la Muerte.
In 1945, she was honored with the Nobel Prize in Literature "for her lyric poetry which, inspired by powerful emotions, has made her name a symbol of the idealistic aspirations of the entire Latin American world".
Continue Reading Below
She received the Chilean National Prize in literature in 1951.
Personal Life & Legacy
Her personal life was tough and difficult from the very beginning. Her father abandoned her family when she was a small child and her lover committed suicide when she was a teenager.
The subsequent death of a beloved nephew some years later further saddened her already broken soul.
As a dedicated and concerned educator cum feminist, she passionately fought for the rights of children, women and the poor.
She was a deeply spiritual person.
Mistral has a school named after her in San Juan, Puerto Rico. 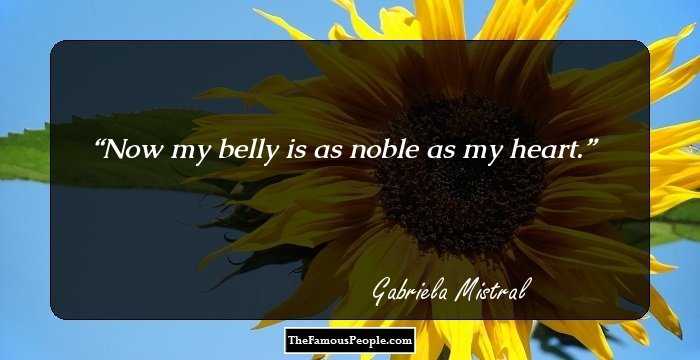 Quotes: Heart
Trivia
She never married but had a very profound love for children.
Her portrait appears on the 5,000 Chilean peso bank note.
The poet created her pen name from the names of her own two favorite poets: Gabriele d'Annunzio and Fr�d�ric Mistral.
Recommended Lists:
Miscellaneous #2251
You May Like

Quotes By Gabriela Mistral | Quote Of The Day | Top 100 Quotes

See the events in life of Gabriela Mistral in Chronological Order