Charles Simic is a renowned poet known for his literary works such as 'Dismantling the Silence' and 'The Lunatic'. To know more about his childhood, career, profile and timeline read on DID WE MISS SOMEONE?
CLICK HERE AND TELL US
WE'LL MAKE SURE
THEY'RE HERE A.S.A.P
Popularity Index
Writers #1037
Poets #156
Charles Simic
Quick Facts

Sherman Alexie
Charles Simic aka Dušan Simić is a living Poet Laureate of the Library of Congress. Born Dusan to a family of ethnic Serbs inside a fading kingdom, his early childhood was highly irregular due to an ongoing war. After a decade of his family being separated, they successfully managed to reunite by emigrating to the United States. In a bid to blend in among his peers at school Dusan took on the American sounding name 'Charles'. Inclined towards literature since an early age he began studying poetry at school. His original plans to graduate from an institution of higher learning were interrupted by another global war. Returning to the continent, Simic served two years in Europe. Deciding for a fresh start in New York, he quickly got married and then enrolled at a prestigious university. After his first few books of poetry were recognized and well-received, Simic's career began its meteoric rise until he became widely recognized in the world of literature. In acknowledgment of his talents, a prestigious American institution awarded Simic an elite literary award for demonstrating merits in the art. He was also asked to serve as a judge at a top-tier international poetry prize. The prolific poet’s writings soon garnered a slew of prizes, as well as fellowships, which felicitously combined with his distinguished career as a professor of literature and the writing arts American Men
University Of Chicago
New York University
Male Poets
Childhood & Early Life
Dušan "Charles" Simić was born on May 9, 1938 in Belgrade in the Kingdom of Yugoslavia. As a small child, he was swept up by the tides of war and his family was nearly killed by bombs on several occasions. When he was 4 years old, his father emigrated to Italy in order to seek employment. It would be 10 years before they would see him again.
When Charles was 15, his mother managed to get the family to Paris, France. When he turned 16, his family emigrated to the United States where he began studying poetry while enrolled in ‘Oak Park High School’ in Chicago. 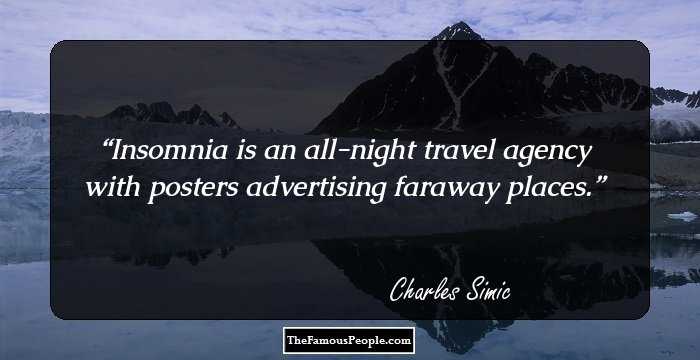 Taurus Poets
Male Writers
Taurus Writers
American Poets
Career
In 1958, Simic left Chicago and relocated to New York City. At night he would study but during the day he had a wide variety of menial and low-paying jobs.
In 1959, he had one of his poems published in the 'Chicago Review'. The next year, he enrolled in the ‘University of Chicago’.
In 1961, he was drafted into the American military. He was obliged to serve for two years during the build-up in Vietnam. He worked as a rule enforcer during one tour in Germany and one in France.
In 1966, Simic graduated from New York University with a Bachelor of Arts degree. He immediately began writing poems, first in his native language, and then gradually in English.
He also began translating poems written by fellow Serbian and Yugoslav writers. He began work as an assistant to the editor of a small photography magazine entitled 'Aperture' in the same year.
In 1967, he published his first collection of poems, 'What the Grass Says'. The book received a lukewarm but overall positive reception.
In 1969, the prolific writer published a second collection of his poems, 'Somewhere among Us a Stone is Taking Notes'. It covered a wide range of topics, from jazz to philosophy.
In 1971, 'Dismantling the Silence' was another published collection of Simic's poems. Several prominent critics took note of his budding talent. He was then hired for a teaching position in the ‘Hayward campus’ of ‘California State College’. He would retain this position for two years.
The same year this eminent poet obtained his American citizenship.
Continue Reading Below
In 1973, he resigned his position at California State College for a more lucrative position of associate professorship at the ‘University of New Hampshire’ in Durham. He continues to work for the same university and is today a professor emeritus of American literature and creating writing.
In 1977, he published ‘Charon's Cosmology’. The wide-ranging collection of poetry was later nominated for a ‘National Book Award’.
This talented writer went on to publish another 60 books, including collections of his own poetry, translations of poetry of Serbian and Yugoslav writers and collections of prose writings.
In April 2015, Simic published a work of poetry, 'The Lunatic', and a book of collected works of prose, 'The Life of Images'. 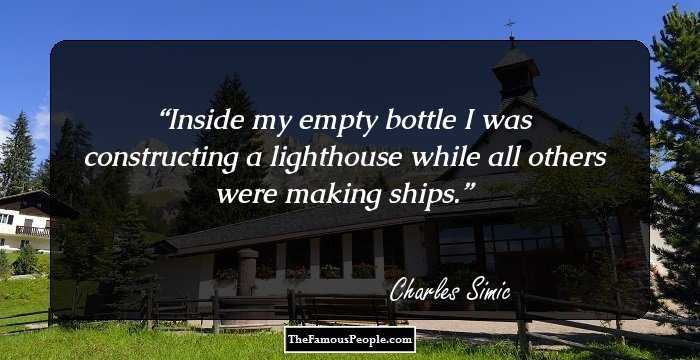 American Writers
Taurus Men
Major Works
Charles served as the Poet Laureate Consultant in Poetry to the Library of Congress of the United States of America in 2007. His works, like ‘The World Doesn’t End’ and 'Somewhere among Us a Stone is Taking Notes', consisted of puns and pranks and are notable for their uniqueness.
Awards & Achievements
This famous writer won the Pulitzer Prize for Poetry in 1990 for his work titled ‘The World Doesn’t End’.
He won several other awards, including a ‘PEN Translation Prize’, the ‘Wallace Stevens Award’, the ‘Frost Medal’, as well as ‘The Zbigniew Herbert International Literary Award’.
In addition to a fellowship from the ‘Guggenheim Foundation', he also received the ‘Ingram Merrill Foundation Fellowship’, five ‘MacArthur Fellowships’ and a fellowship from the ‘National Endowment for the Arts’. 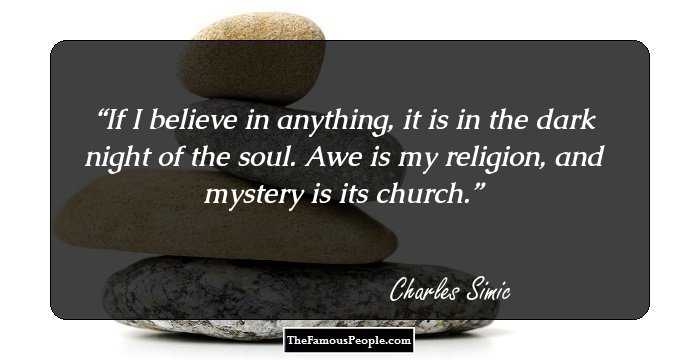 Quotes: Believe, Soul, I
Personal Life & Legacy
In 1964, Simic married Helen Dubin. Together they have two children.
He speaks fluent English, French, Serbian, Croatian, Macedonian and Slovenian.
Trivia
Joking about his childhood growing up in the midst of World War 2, this famous poet once said, "Hitler and Stalin were my family's travel agents". He also joked that his childhood education didn't suffer because "Hitler and Stalin taught me the basics".
One piece of advice that this famous personality has for poets is 'Don't assume you're the only one in the world who suffers'
You May Like

Quotes By Charles Simic | Quote Of The Day | Top 100 Quotes

See the events in life of Charles Simic in Chronological Order