Ferdinand Foch was a military theorist and a French soldier. He acted as an Allied Generalissimo (military rank of the highest degree) during the First Wold War. Inspired by the stories of the Napoleonic Wars during his childhood days, he decided to pursue a military career and joined the French Army. As an instructor at the Staff College, he became well-known for his in-depth analysis of the Franco-Prussian and Napoleonic campaigns and their importance in military operations. He was greatly influenced by the Clausewitzian philosophy in formulating his military doctrines. Later, he published his collection of lectures in the form of two books. Unfortunately, many of his contemporaries misunderstood his doctrines of military tactics. He played a significant part during the First World War. He achieved the rank of assistant Commander-in-Chief for his praiseworthy performance during the First Battle of Marne. As a reward for his skilled military tactics, King George V of the United Kingdom appointed him as an honorary Knight Grand Cross of the Oder of the Bath. He faced criticism for his role during the Third Battle of Artois and the Battle of the Somme. Several historians often compared him to Napoleon and Caesar as a commander. Most of these historians criticize him for his costly offensive of 1914, in which the French Army failed to achieve success. Philippe II, Du...
DID WE MISS SOMEONE?
CLICK HERE AND TELL US
WE'LL MAKE SURE
THEY'RE HERE A.S.A.P
Quick Facts

French Celebrities
French Men
Libra Leaders
Male Leaders
French Leaders
Childhood & Early Life
Ferdinand Foch was born in Tarbes, Hautes-Pyrenees, France. He was the son of a civil servant. During his childhood, the story of his maternal grandfather, who was an officer of the Revolutionary and Napoleonic eras, greatly inspired him.
After attending school in Tarbes, Rodez, in Southern France, he took admission at the Jesuit College in St. Etienne. He decided to pursue a military career after getting influenced by the stories of the Napoleonic Wars. 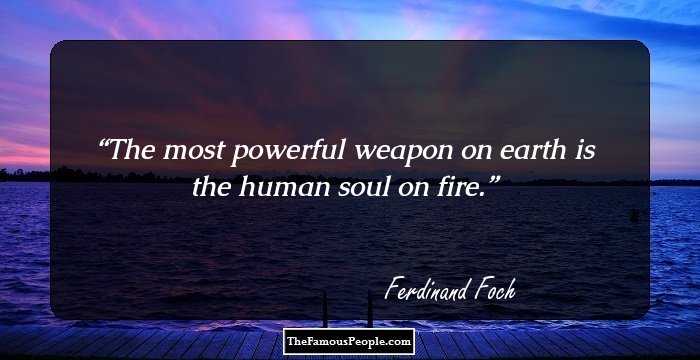 Quotes: Life, Love, Soul
Continue Reading Below
Career
In 1870, during the Franco-Prussian War, he joined the French 4th Marine Infantry Regiment and decided to remain in the army even after the war.
In 1873, he took admission at the Ecole Polytechnique and became a Lieutenant in the 24th Artillery Regiment, despite not having completed his course due to the shortage of junior officers.
Gradually, he rose to the rank of Captain and attended Staff College in 1885 to receive further military training.
In 1895, he returned back to this college as an instructor whose duty included teaching general tactics. Later, he became a full time professor at the institution. As part of his lectures there, he got recognition for his critical analysis of the Franco-Prussian and Napoleonic campaigns.
In 1898, after getting promotion, he became the Lieutenant-Colonel. In 1901, he was posted to a regiment. In 1903, another promotion made him a Colonel. In the same year, his collection of lectures titled “On the Principles of War” was published.
In the year 1904, another collection namely “On the Conduct War” appeared. Both of these books reintroduced the concept of the offensive to French military history.
Georges Clemenceau, the then Prime Minister of France was much impressed by the military potentiality of Foch. After serving as a deputy chief of the general staff for a brief period, Foch also worked as the commandant of the Ecole Millitaire.
From 1907 to 1911, he worked as a Commandant in the Staff College. In 1911, he was promoted to Major General. Two years later, he took command of XX Corps at Nancy as the Lieutenant General.
Due to his remarkable performance during the First Battle of Marne, he was promoted to the rank of assistant Commander-in-Chief whose responsibility was to co-ordinate the activities of the northern French armies.
Continue Reading Below
In 1917, as a result of his promotion, he became the Chief of the General Staff. In the same year, the Supreme War Council was set up formally and he acted as one of the Military Representatives.
After becoming Marshal of France in 1918, he planned the Grand Offensive which eventually led to the defeat of Germany. Later, he acquired control regarding a planned invasion of Germany though Bavaria. In 1919, he became a British Field Marshal. 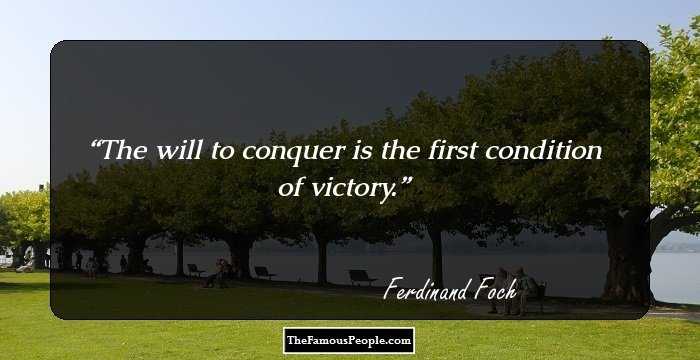 Quotes: Will
Major Battles
Under his command, the XX Corps took part in the Battle of the Frontiers as part of the Second Army of General de Castelnau during the Wold War I in 1914. In spite of its noteworthy performance, the French lost the battle.
Next, he took the responsibility to command the Ninth Army during the First battle of the Marne in September 1914. During this battle, he successfully applied a series of defensive actions to prevent the German breakthrough. He regained the Marne on 12 September and liberated the city.
In 1915, he fought the Third Battle of Artois. In the next year, he took command of the French part of the Battle of the Somme. For his military tactics in these two battles, he faced severe criticism and was removed from command in 1916.
Awards & Achievements
Due to his valuable advice during the Polish-Bolshevik War of 1920, and his contribution to create pressure on Germany during the Great Poland Uprising, he received an award along with the title of Marshal of Poland in 1923. 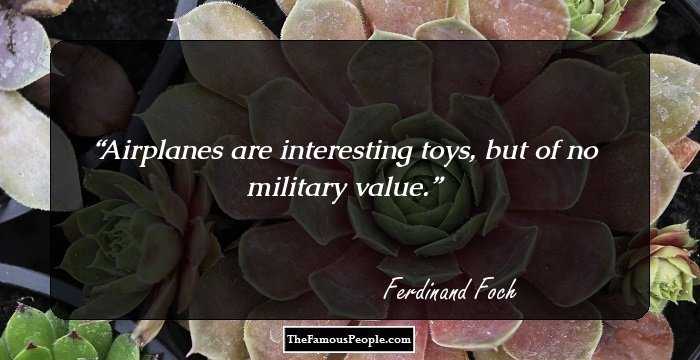 Personal Life & Legacy
He married Julie Bienvenue in 1878.
After his death, his body was buried next to Napoleon and other renowned French soldiers and officers in Les Invalides, France.
To honour his memory, a heavy cruiser and an aircraft carrier are named after him. Moreover, his name is associated with several streets of France. Fochville, a town situated in South Africa, is named after him.
Trivia
London’s Victoria Station has a statue of this French military theorist. Till now, he is the only French personality who has a statue in London. Apart from that, he is the only Frenchman whom the British made an honorary field-marshal.

Quotes By Ferdinand Foch | Quote Of The Day | Top 100 Quotes

See the events in life of Ferdinand Foch in Chronological Order