Advanced Search
Eric Schmidt is an American software engineer who is currently serving as the executive chairman of Alphabet Inc., the holding company created to directly own several companies that were owned by or tied to Google, including a slimmed-down version of Google itself. Before being appointed the executive chairman of Alphabet, Schmidt had served as the Chief Executive Officer (CEO) of Google for a decade and under his leadership the company greatly diversified its product range while fostering a culture of innovation within the senior management. Born to well-educated and ambitious parents, he was groomed to succeed from a young age. Intelligent, curious and determined, Schmidt grew up to be brilliant in not just academics, but also excelled in sports and was a long-distance runner in high school. Initially aspiring to be an architect, he enrolled at the Princeton University. However he soon realized that he was more interested in electrical engineering and changed his major. He furthered his education at the University of California, Berkeley, and then went on to complete his doctoral degree too. He worked in several companies including Sun Microsystems before joining Google in 2001 as the CEO. He has also sat on the boards of trustees for both Carnegie Mellon University and Princeton University American People
American Men
Princeton University
University Of California, Berkeley
American CEOs
Childhood & Early Life
Eric Emerson Schmidt was born on April 27, 1955, in Washington, D.C. to Eleanor and Wilson Emerson Schmidt. His mother had a Master’s degree in psychology while his father was a professor of international economics at Virginia Tech and Johns Hopkins University. Eric has two brothers.
He was an intelligent and athletic boy who performed well in school and was a long-distance runner. He graduated from Yorktown High School in Arlington, Virginia, in 1972.
As a teenager, he aspired to be an architect and joined Princeton University, as architecture major. But, he soon realized that he was more interested in electrical engineering and changed his major. He graduated with a B.S. degree in 1976.
He then enrolled at the University of California, Berkeley, from where he earned an M.S. degree in 1979. During his time at the university he designed and implemented a network linking the campus computer center with the CS and EECS departments.
He worked on his Ph.D. following the completion of his Master’s from the same university and earned his doctorate in 1982 in EECS. His dissertation was on the challenges of managing distributed software development. 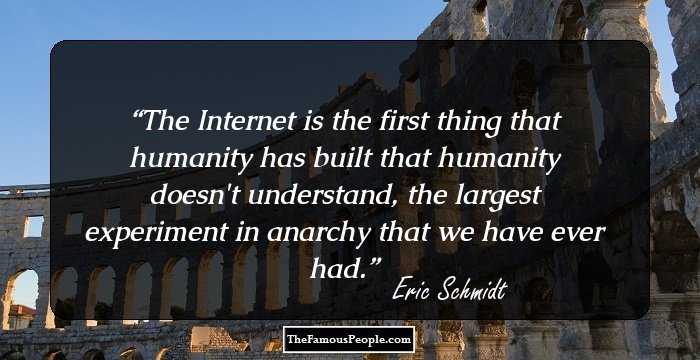 Continue Reading Below
Career
One of the initial jobs he held was at the Bell Labs. There he worked alongside Mike Lesk to rewrite Lex, a program to generate lexical analyzers for the Unix computer operating system. He worked on a regular-expression description and converted it into an important tool for compiler construction.
He joined Sun Microsystems as its first software manager in 1983. He possessed great technical knowledge and a high degree of business acumen and rose through the ranks in the company. He was appointed director of software engineering before becoming the vice president and general manager of the software products division.
He eventually rose to become the vice president of the general systems group and president of Sun Technology Enterprises.
By the late 1990s he had gained a reputation as a highly efficient business executive. He was appointed the CEO and chairman of the board of Novell in 1997.
In 2001, Schmidt was interviewed by Larry Page and Sergey Brin, the founders of Google. Founded in 1998, Google was still a young company and the founders were looking for an experienced person to run the company. Page and Brin found their perfect candidate in Schmidt and appointed him as Google’s CEO in August.
As the CEO, Schmidt initially oversaw the works of the vice presidents and the sales organization, and focused on building the corporate infrastructure needed to maintain Google's rapid growth as a company. Under his leadership the company saw rapid growth and diversification and was soon one of the fastest growing companies in the world.
In 2011, Page replaced Schmidt as the CEO and Schmidt continued as the executive chairman of the company. In this position he was responsible for building partnerships and broader business relationships, and government outreach. He also advised the CEO and senior leadership on business and policy issues.
In 2015 Google underwent a major corporate restructuring that culminated in the creation of Alphabet Inc. as the holding company to directly own several companies that were owned by or tied to Google, including Google itself. Schmidt was named Alphabet’s executive chairman.
In addition to his corporate responsibilities, he is also a member of the President’s Council of Advisors on Science and Technology (PCAST) in President Barack Obama’s administration. 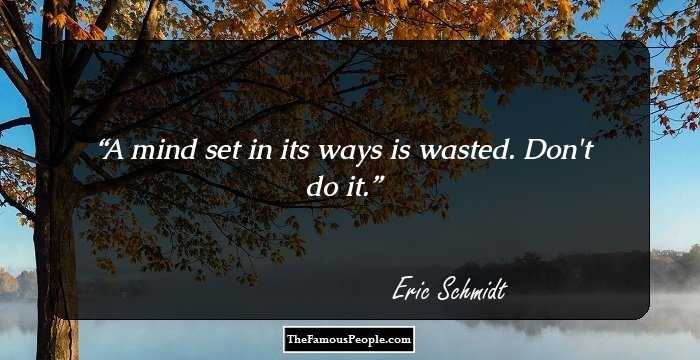 Awards & Achievements
Eric Schmidt was elected to the National Academy of Engineering in 2006 and inducted into the American Academy of Arts and Sciences as a fellow in 2007.
Personal Life & Legacy
He married Wendy Susan Boyle in 1980. They have two daughters, Sophie and Allison. The couple separated in 2011 but did not divorce.
Schmidt has the reputation of being a playboy, and in spite of being married, he often dates other women. Some of his girlfriends are TV presenter Kate Bohner, pianist Chau-Giang Nguyen, PR executive Marcy Simon and TV producer Lisa Shields. 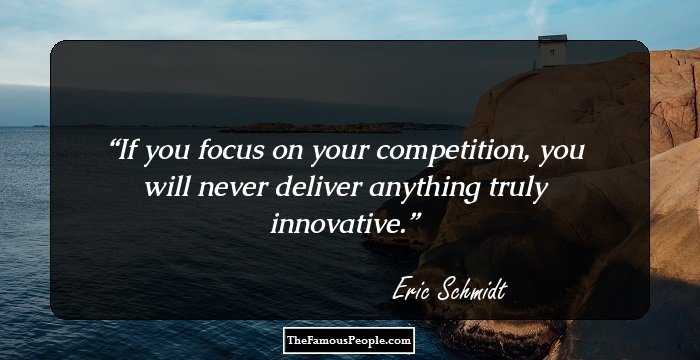 Quotes: You, Never, Will
Philanthropic Works
Eric Schmidt along with his wife Wendy created the private foundation, The Schmidt Family Foundation, in 2006 to address issues related to responsible use of natural resources and sustainability. The foundation has made grants to several organizations including the Energy Foundation, the California Academy of Sciences, the Regeneration Project, the Columbia Center for Children’s Environmental Health, and Green for All.
The couple established a University of Chicago summer school program for aspiring data scientists called the “Eric & Wendy Schmidt Data Science for Social Good Fellowship”.
The Schmidts also gave $25 million as an endowment to the Schmidt Transformative Technology Fund at Princeton University in 2009.

Quotes By Eric Schmidt | Quote Of The Day | Top 100 Quotes

See the events in life of Eric Schmidt in Chronological Order