Larry Page, born as Lawrence Page, is an American entrepreneur and computer scientist who, along with Sergey Brin, co-founded Google Inc., the search engine giant that offers a wide range of internet products and services. Google began as an online search firm and gradually expanded its operations to other internet related areas. As the son of computer professionals, Page’s fascination with computers began at an early age. As a child, he showed keen interest in technology, business and innovation. While studying Computer Science at Stanford University, he met Sergey Brin with whose assistance he created a search engine that returned results based on relevancy. Page and Brin launched the company under the name ‘Google Inc’ in 1998. They both served as the co-presidents until 2001 when Eric Schmidt was appointed as Chairman and CEO of Google. In 2011, Page officially became the CEO of Google while Schmidt continues to serve as executive chairman. Page is also a member of the Board of Directors of the company. He has an interest in renewable energy technology and philanthropy. Google.org, the philanthropic branch of the company, was set up in 2004. It basically deals with issues of climate change and renewable energy. Mark Zuckerberg
26th March In History
DID WE MISS SOMEONE?
CLICK HERE AND TELL US
WE'LL MAKE SURE
THEY'RE HERE A.S.A.P
Quick Facts

American People
CEOs
American Men
Stanford University
University Of Michigan
Childhood & Early Life
Larry Page was born to Carl Page and Gloria in Michigan. Both his parents were computer science professors. He was raised without religion.
His childhood home was full of computers and science magazines, and that increased his fascination for technology at an early age. He was also interested in business and innovation, and by the age of 12 he realized that he wanted to start a company.
He graduated from East Lansing High School in 1991 and pursued a bachelor’s degree in computer engineering from the University of Michigan. Later, he enrolled for his Master of Science in computer science from Stanford University. 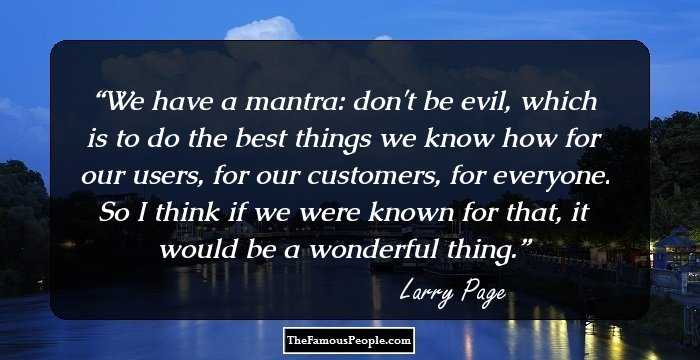 Quotes: Think
Continue Reading Below
Founding and Growth of Google
During his PhD at Stanford, he met fellow researcher Sergey Brin while working on a research project in 1995. By 1996 they had built a search engine - initially called ‘BackRub’. It was operated on Stanford servers for many months.
Page and Brin decided to incorporate their project as a company. Sun Microsystems co-founder Andy Bechtolsheim played a major role in financing the company as he wrote a check for $100,000 to the entity that had not even come into existence as yet.
In September 1998, the project, now renamed as ‘Google’, was officially incorporated as a company. Eric Schmidt was appointed as the CEO in 2001 while Page and Brin became the presidents of products and technology, respectively.
In 2004, Google launched Orkut, a social networking site, and introduced Google Desktop search. The same year, Google held its Initial Public Offering (IPO) which made Page and Brin millionaires. The philanthropic wing of Google, Google.org was formed to contribute towards social issues and causes.
The year 2005 was quite productive for Google. Google Maps, Blogger Mobile, Google Reader, and iGoogle were released that year. The next year, Google acquired Youtube and introduced the chat feature in Gmail.
Google entered into a partnership with China Mobile and Salesforce.com in 2007. The company also signed partnerships to make Google Apps for Education freely available to thousands of students in Kenya and Rwanda.
In 2008, Google launched Google Sites and a new version of Google Earth. Google Health, a personal health information centralization service, was also released in the same year, but the service was discontinued in 2011 when it was unable to achieve the desired impact.
Picasa for Mac was launched in January 2009 followed by Google Latitude and the latest version of Google Earth. Google Ventures, a venture capital fund for supporting new technology companies, was also introduced the same year.
In 2010, Google acquired Aardvark and Picnik. The Google Apps Marketplace, a new online store for integrated business applications, was launched to enable customers to easily manage cloud applications.
Continue Reading Below
In January 2011, Larry Page was made the CEO. Eric Schmidt, the former CEO, continues to serve the company as Executive Chairman. Google acquired Admeld and Zagat with a view to provide improvised services to its clients. 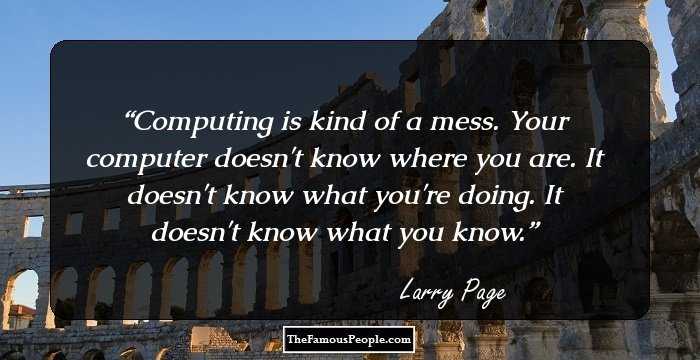 Quotes: You
Major Works
Larry Page’s biggest work is the formation of Google. Google, founded in 1998, is world's leading search engine, serving millions of users worldwide. Besides search, Google offers many other products and services like Gmail, Blogger, Google Maps, Picasa etc.
The charitable arm of the company, Google.org, was formed in 2004. The organization is dedicated to finding technological solutions to help address global challenges like hunger and poverty.
Awards & Achievements
In 2002, Page and Brin were named in the MIT Technology Review TR100 for being among the top 100 innovators in the world under the age of 35.
The World Economic Forum named Page as a Global Leader for Tomorrow in 2002.
Page and Brin received the prestigious Marconi Foundation Prize (2004) which is given to honour significant contributions in science and technology. They were also elected Fellow of the Marconi Foundation at Columbia University. 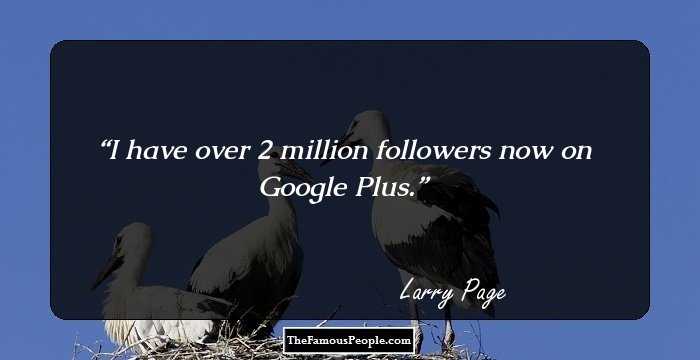 Personal Life & Legacy
Larry Page married Lucinda Southworth, a research scientist, in 2007. They have one child.
Trivia
His wife is the sister of actress and model Carrie Southworth.
Even though he enrolled for a PhD in Stanford University, he could not complete it because of his business ventures.
His brother Carl Page Jr. is also an internet entrepreneur.

See the events in life of Larry Page in Chronological Order 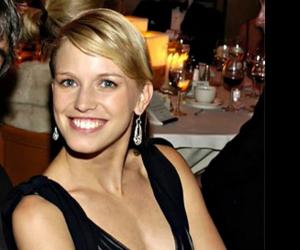