Bill Gates is an American business magnate and computer programmer who is the co-founder of Microsoft, the world’s largest PC software company. Since the company’s formation in 1975, Gates has held several positions including those of the chairman, CEO and chief software architect. One of the most famous entrepreneurs of the personal computer revolution, he has been consistently ranked among the world’s wealthiest people starting from 1987. Born as the son of a successful lawyer, Bill Gates was encouraged from a young age to be competitive. Bright and curious, he developed an interest in computers while in school and wrote his first computer program as a young teenager. After completing his schooling, he enrolled at the prestigious Harvard College though he did not stay there long enough to complete his studies. He dropped out to pursue his passion in computers and teamed up with Paul Allen, a former schoolmate, to form Microsoft. The company proved to be highly successful and within years Gates became an internationally known entrepreneur. Among the wealthiest persons in the world, Bill Gates is a renowned philanthropist and along with his ex-wife, he has created the charity organization Bill & Melinda Gates Foundation. He has also authored and co-authored several books.. He has also authored and co-authored several books. Mary Maxwell Gates
DID WE MISS SOMEONE?
CLICK HERE AND TELL US
WE'LL MAKE SURE
THEY'RE HERE A.S.A.P
Quick Facts

American People
CEOs
Philanthropists
Computer Scientists
American Men
Childhood & Early Life
Born as William Henry "Bill" Gates III on October 28, 1955, he is the son of William H. Gates, Sr. and Mary Maxwell Gates. His father was a prominent lawyer while his mother served on the board of directors for First Interstate BancSystem and the United Way. He has two sisters.
He studied at the Lakeside School where he developed an interest in computing. He was just 13 when he wrote his first software program on the school’s computer and by the time he was in high school he, along with some of his friends, had computerized their school’s payroll system.
His future business collaborator, Paul Allen, was a senior at Lakeside. At the age of 17, Gates teamed up with Allen to form a venture called Traf-O-Data, to make traffic counters based on the Intel 8008 processor.
He graduated from high school in 1973. He was a National Merit Scholar and scored 1590 out of 1600 on the SAT. He enrolled at Harvard College later the same year. As a college student he spent a lot of time on the computers though he was not much interested in studying other subjects. His friend Allen suggested that Bill drop out of college to start a business. 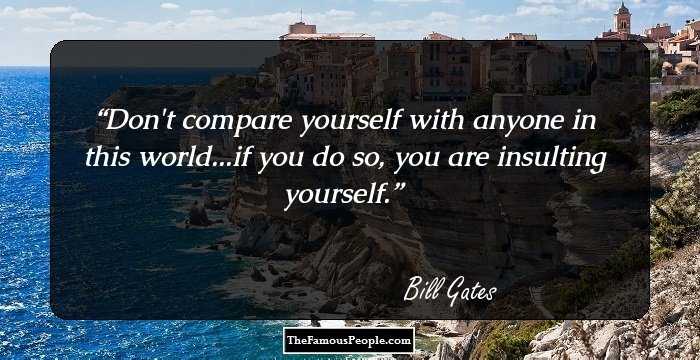 Quotes: You, Yourself
Continue Reading Below
Career
Bill Gates and Paul Allen collaborated to found Microsoft (initially called Micro-Soft) in 1975. In the beginning they adapted BASIC, a popular programming language for use on microcomputers. It proved to be a success and they continued to develop programming language software for various systems.
In 1980, the duo was approached by International Business Machine (IBM) with a proposal that Microsoft write the BASIC interpreter for IBM’s upcoming personal computer, the IBM PC. Microsoft created the PC DOS operating system which they delivered to IBM in exchange for a one-time fee of $50,000.
Soon Microsoft’s operating systems became very popular and the company introduced an operating environment named Windows on November 20, 1985, as a graphical operating system shell for MS-DOS. Over the following years Windows came to dominate the world’s personal computer market acquiring over 90% market share. The company saw phenomenal financial success, and being the company’s largest individual shareholder, Bill Gates amassed a great fortune.
Microsoft introduced Microsoft Office in 1989. The package integrated several applications like Microsoft Word and Excel into one system that was compatible with all Microsoft products. The success of MS Office gave Microsoft a virtual monopoly on operating systems for PCs.
In the mid 1990s when the use of the internet spread throughout the globe at an alarming speed, Gates focused Microsoft on the development of consumer and enterprise software solutions for the Internet. Windows CE operating system platform and the Microsoft Network were among the innovative solutions developed during this time.
In January 2000, Gates stepped down as Chief Executive Officer of Microsoft though he retained his position as chairman. He created the new position of Chief Software Architect for himself. Over the next few years he gradually transferred his duties to others at Microsoft and started spending more time in philanthropic works. He stepped down as Chairman of Microsoft in February 2014, and currently serves as technology advisor to support CEO Satya Nadella. 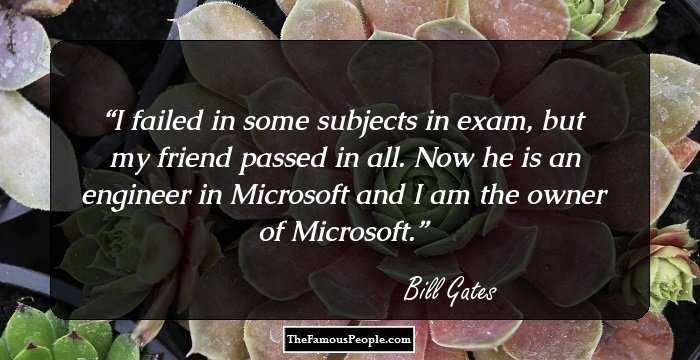 Quotes: I
Major Works
Bill Gates is best known as the co-founder of Microsoft, the multinational technology company which is today considered one of the world's most valuable companies. It is the world's largest software maker measured by revenues
Awards & Achievements
In 2002, Bill and Melinda Gates received the Jefferson Award for Greatest Public Service Benefiting the Disadvantaged.
Continue Reading Below
Gates received the Bower Award for Business Leadership from The Franklin Institute in 2010 in recognition of his achievements at Microsoft and his philanthropic work.
Bill and Melinda Gates jointly received India's third highest civilian honor Padma Bhushan in 2015 for their foundation's philanthropic activities in India. 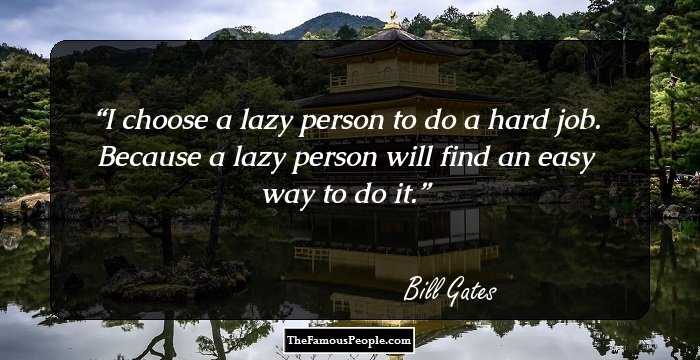 Quotes: Will, I
Family & Personal Life

Bill Gates met Melinda French, a young woman working at Microsoft, in 1989. The couple grew close over a period of time and got married in 1994. They have three children: Rory John Gates, Jennifer Katharine Gates, Phoebe Adele Gates. Bill and Melinda divorced in 2021 after 27 years of marriage.

Philanthropic Works
In 1999, he donated US$20 million to the Massachusetts Institute of Technology (MIT) for the construction of a computer laboratory which was named the "William H. Gates Building" in his honor.

Along with his then-wife, Melinda, Bill Gates formed the Bill & Melinda Gates Foundation (BMGF or the Gates Foundation) in 2000. It is the largest private foundation in the world and aims to enhance healthcare and reduce extreme poverty worldwide.

In 2010, Gates along with fellow billionaire investors Warren Buffett, and Facebook founder and CEO Mark Zuckerberg signed the "Gates-Buffet Giving Pledge", committing to donate at least half of their wealth over the course of time to charity.
Top 10 Facts You Did Not Know About Bill Gates
His childhood nickname was “Trey”.
The first computer program that Bill Gates wrote was a tic-tac-toe game.
As a school student he used to brag that he would be a millionaire by the time he was 30—he actually became one by the time he was 31!
Gates was once arrested in New Mexico in 1977 for driving without a license.
He acquired the Codex Leicester—a collection of writings by Leonardo da Vinci—at an auction for $30.8 million, in 1994.
Bill Gates’ biggest regret is that he doesn't know any foreign languages.
He is not active on Facebook despite being friends with Facebook co-founder Mark Zuckerberg.
Had Microsoft failed to work out, he would have been a researcher for artificial intelligence.
Gates says his kids will only inherit $10 million each despite his immense wealth.
His all-time favorite business book is ‘Business Adventures’ by John Brooks, published in 1969.
Recommended Lists:
Business People #62
Scientists #410
Miscellaneous #1443

See the events in life of Bill Gates in Chronological Order