Elon Musk is one of the greatest and most prolific modern inventors and is responsible for monumental advancements in futuristic technology like renewable energy and space travel. Many of his innovations seem to be right out of a science-fiction movie, but throughout his career he has brought about huge scientific breakthroughs. After making his first fortune from the internet payment service ‘PayPal’, he invested $100 million in his space travel company, ‘SpaceX’ and began building satellites, launch vehicles and other spacecraft both for NASA and for his own company, creating new milestones with his privately funded spacecraft. Many of his revolutionary ideas and inventions focus on space travel, renewable energy, commercial electric cars and other technologies, that look to a future where fossil fuels and other resources may be in shorter supply. His futuristic and visionary ideas have won him both scientific and philanthropic recognition and awards. The pop culture sometimes portrays him as a sort of real life super hero, dedicated to providing worldwide solutions to international problems. Musk looks to the future, hopes for intelligent life elsewhere in the universe and continues to plan far-reaching futuristic goals such a human colony on Mars. Scroll down to learn all about this illustrious personality. American People
Automobile Industry
Electrical Engineers
American Men
University Of Pennsylvania
Childhood & Early Life
Elon Musk was born on June 28, 1971, in Pretoria, South Africa. The oldest of three siblings with a prodigious family name, he grew up in the last decades of Apartheid.
His parents were Maye Musk, a British-Canadian model and Errol Musk, a South Africa born British electrical engineer. When they divorced in 1980, Elon stayed mainly with his father in South Africa. A few years later, he began teaching himself computer programming and sold his first video game at the age of 12.
For his undergraduate education he attended the Queen’s University in Kingston, Ontario, in 1990. He eventually transferred to the University of Pennsylvania, earning dual degree in Physics and Economics.
In addition to the bachelor’s degrees, he earned in physics and economics, he also holds an honorary doctorate in Design from the ‘Art Center College of Design’ and an honorary doctorate in Aerospace Engineering from the ‘University of Surrey’. 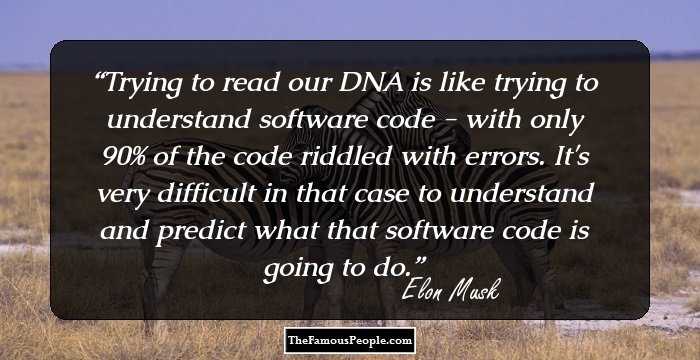 Quotes: Like, Trying
Continue Reading Below
Career
He moved to California to attend Stanford for a PhD in applied physics in 1995, but quit within a few of days to pursue his own interests in avenues of technology and entrepreneurship. Later that year, he worked with his brother, Kimbal Musk, to develop the software company ‘Zip2’, which provided services to high end newspaper clients like 'The New York Times' and the 'Chicago Tribune'.
After the successful sale of Zip2 to Compaq in 1999, Musk went straight into his next venture, an online financial service called ‘X.com’. Shortly after the company acquired a money transfer service called ‘PayPal’, through a merger, they began to focus their efforts exclusively on building this internet payment service. The success of ‘PayPal’ led Musk to sell his stock in the company to ‘eBay’ for $165 million.
In 2002, he invested his millions in his third company ‘Space Exploration Technologies’ or just ‘SpaceX’. Within seven years, the company had designed the ‘Falcon’ line of space launch vehicles and the ‘Dragon’ line of multi-purpose spacecraft and was making history with their privately funded innovation. ‘SpaceX’ received contracts from NASA to create a launch craft to deliver cargo to the ‘International Space Station’.
Tesla Motors was founded with the mission of designing and building electric cars. Musk invested in the company and became its chairman in 2004, a year after its inception, taking on an active role in the design of the ‘Roadster’, which won the ‘Global Green’ product award. During the recession when the company was adversely affected, he went on to become the CEO and product architect of the company, a role he holds till today.
After designing the initial concept for ‘SolarCity’, Musk remains its biggest shareholder. Today, it is the second largest provider of solar energy in the United States, with a focus on combating global warming.
On August 12, 2013, Musk announced revolutionary plans for a high speed travel technology that, in theory, could replace airplane travel as a faster and cheaper option. His company ‘SpaceX’ is currently working on putting his plans into practice, with the design intended to run entirely on solar energy.
He has envisioned a high-speed transportation system known as the Hyperloop. It incorporates reduced-pressure tubes in which pressurized capsules ride on air bearings driven by linear induction motors and air compressors.
In July 2017, he announced that first successful test run of Hyperloop has been done in Nevada. He also said that he has got verbal approval to build a hyperloop from New York City to Washington D.C. 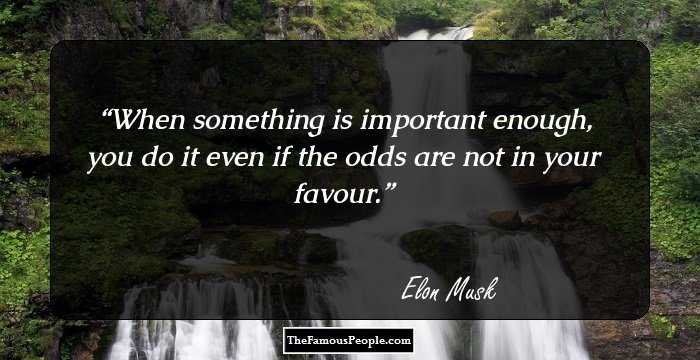 Quotes: You
Continue Reading Below
Controversy
In September 2018, U.S. Securities and Exchange Commission (SEC) filed a lawsuit against Musk for a tweet in which he claimed that funding had been secured for taking Tesla. Musk reached a private. The lawsuit sought to bar Musk from serving as CEO on publicly traded companies.
Later on Musk reached a settlement with the SEC. Under it terms, Musk and Tesla were fined $20 million each and Musk had to step down as Tesla chairman while remaining Tesla's CEO. In place of Musk, Robyn Denholm was named as Tesla's acting Chairman
Major Works
SpaceX has completed several contracts for NASA, sending its Falcon 9 spacecraft to the International Space Station with cargo. This spacecraft replaced the space shuttle when it retired in 2011.
Musk was heavily involved in the design of Tesla Motors' first electric sports car, the ‘Tesla Roadster’. Musk received the 2006 ‘Global Green’ product design award for this vehicle, presented by Mikhail Gorbachev. 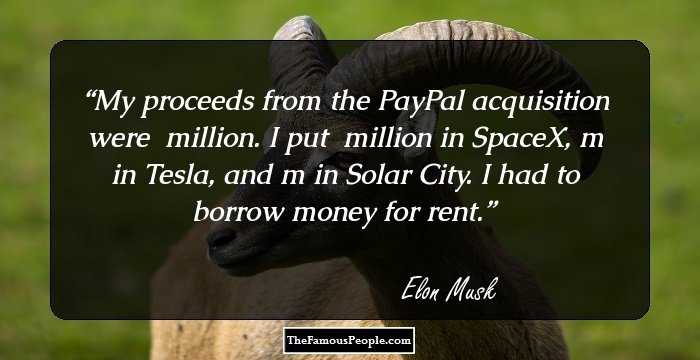 Quotes: Money, I
Awards & Achievements
In 2010, the premier world organization for aerospace records, the ‘Fédération Aéronautique Internationale’ awarded Musk the ‘FAI Gold Space Medal. He shares this highest honor with prominent personalities like Neil Armstrong and John Glenn.
He has won multiple awards and recognitions for his many advancements in science, technology and business alike and in 2013 was named 'Fortune' magazine's 'Businessperson of the Year' for his companies ‘SpaceX’, ‘Tesla Motors’ and ‘SolarCity’
In 2016, he was ranked 21st on the Forbes list of The World's Most Powerful People.
He was ranked 21st wealthiest person in America in the 2017 Forbes 400 list.
Continue Reading Below
Family & Personal Life
Elon Musk has married thrice and twice to the same woman. His first marriage was to Canadian author Justine Wilson in 2000. They had six children together: all sons. Their first son, Nevada Alexander Musk, died at the age of 10 weeks. The couple had five more sons through IVF; twins in 2004, followed by triplets in 2006. Elon Musk and Justine Wilson divorced in 2008.
In 2008, he began dating English actress, Talulah Riley, and the two of them got married in 2010. The couple separated in 2012.
In 2013, Elon Musk remarried Talulah Riley but the couple filed for divorce in 2014 and it was finalised in 2016.

Elon Musk was briefly in a relationship with American actress Amber Heard in 2016, but the couple split owing to their conflicting schedules.

Elon Musk started dating Canadian musician Grimes in 2018. In May 2020, Grimes gave birth to their son. In March 2021, Musk stated that he was single. In March 2022, Grimes revealed that they have broken up and she further stated that they welcomed a daughter through surrogacy in December 2021.

Elon Musk's sister, Tosca Musk, is the founder of Musk Entertainment and has produced several movies.
Trivia
In 2004, the famous inventor attended the ‘Burning Man’ arts festival in Nevada. According to him, it was at this notoriously radical art and music festival that he came up with the idea of ‘SolarCity’.
Elon Musk believes there could be simple life on other planets, but he is not sure about the possibility of other intelligent life.
Recommended Lists:
Business People #1
Engineers #22

See the events in life of Elon Musk in Chronological Order