Sundar Pichai is a computer engineer and the current CEO of Google Inc. The technology giant Google, which specializes in Internet-related services and products, underwent a major corporate restructuring in 2015 following which Alphabet Inc was launched as its parent company with co-founders Larry Page as its CEO and Sergey Brin as President. Pichai, who had been serving as Google’s head of Products and Engineering, was named the new CEO of Google which is the biggest company under Alphabet Inc. Pichai had joined Google years ago in 2004 as a product manager and led the innovative efforts for several of Google’s products including Google Chrome and Chrome OS which went on to become highly successful. Eventually he took over the management of other Google products like Gmail and Google Docs, and rose through the ranks rapidly. Born in Chennai, India, Pichai was bright and creative from a young age. Having received his education from some of the most prestigious institutions in the world, he worked in engineering and product management at Applied Materials and in management consulting at McKinsey & Company before becoming a part of Google. Pichai is well-liked by his colleagues and is dubbed as the “man behind Google’s most important products 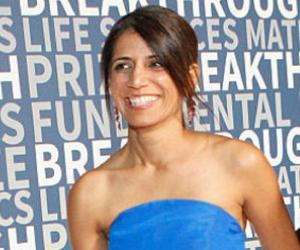 American People
Engineers
American Men
Stanford University
University Of Pennsylvania
Childhood & Early Life
He was born as Pichai Sundararajan on July 12, 1972, in Madurai, Tamil Nadu, India. His father, Regunatha Pichai, worked as an electrical engineer for the British conglomerate GEC and managed a factory that made electrical components. His mother used to be a stenographer before having children. He has one brother.
Pichai grew up in a middle-class home and was a bright student. He excelled academically at his school, Padma Seshadri Bala Bhavan, and earned a seat in the Indian Institute of Technology in Kharagpur, one of the most prestigious engineering institutions in India.
He did his B.Tech in Metallurgical Engineering from IIT Kharagpur and then won a scholarship to study materials science and semiconductor physics from Stanford University from where he eventually earned his M.S. 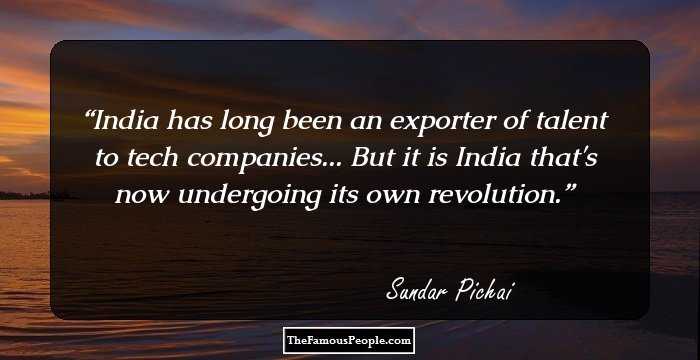 Famous Beautiful Women With Green Eyes
Career
He initially planned to pursue a Ph.D. from Stanford and embark on an academic career. However, he dropped out and joined Applied Materials—a Silicon Valley semiconductor maker—as an engineer and product manager. He did not work there for long.
He went on to complete his MBA from the Wharton School of the University of Pennsylvania (2002), where he was named a Siebel Scholar and a Palmer Scholar.
Following the completion of his MBA he was appointed as a management consultant at McKinsey & Company.
He joined Google in 2004. Initially he worked on Google’s search toolbar as a part of a small team. The toolbar gave users of Internet Explorer and Firefox easy access to Google search.
He also worked on other Google products like Google Gears and Google Pack. The success of Google’s toolbar gave Pichai the idea that Google should develop its own browser. He discussed his idea with his seniors and faced an objection from then-CEO Eric Schmidt, who thought that developing a browser would be a too expensive affair.
However, Pichai persevered and convinced the co-founders of Google, Larry Page and Sergey Brin, to launch Google’s own browser. Pichai played a pivotal role in the ultimate launch of the browser, Google Chrome, in 2008. Chrome proved to be a great success as it allowed the users to directly access Google’s search engine.
Pichai became an internationally known figure following the phenomenal success of the Chrome which eventually became the No. 1 browser in the world, surpassing competitors such as Internet Explorer and Firefox. The Chrome also paved the way for a series of other important products like Chrome OS, Chromebooks, and Chromecast.
In 2008, Pichai was promoted to Vice President of product development. In this position he started appearing more often at Google presentations and continued rising up the ranks in Google. By 2012, he had become the Senior Vice President of Chrome and apps.
In 2013, Andy Rubin, the creator of Android, left to work on a different project. Larry Page then made Pichai in-charge of Android as well. His influence continued to increase and he was made the Product Chief in October 2014.
Continue Reading Below
In 2015, Google formed a company, Alphabet Inc., to serve as a holding company and conglomerate to own the subsidiaries that were previously owned by Google, including a new “slimmed down” version of Google itself. On 10 August 2015, Sundar Pichai was named the new CEO of Google.
In February 2016, he was awarded 273,328 shares of Google's holding company Alphabet, which led to a rise in his net worth. These shares were worth $199 million, and this took his holdings up to $650 million. 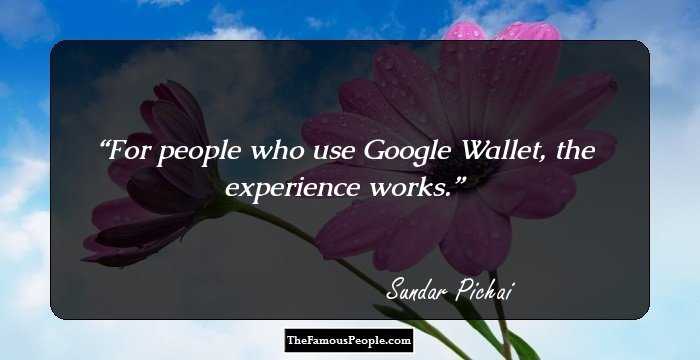 Quotes: Experience
Major Works
An engineering genius known for his innovative ideas, Sundar Pichai is best known as the mastermind behind the launch of the Chrome browser in 2008. He played a pivotal role in convincing his seniors at Google to launch the browser which in time became the most popular browser on the internet and also led to the launch of the Chrome operating system.
Personal Life & Legacy
He is married to Anjali Pichai, and is the father of two children. 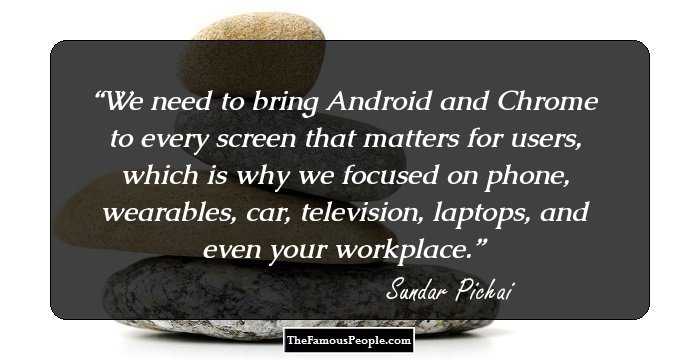 Top 10 Facts You Did Not Know About Sundar Pichai
Sundar Pichai is a huge cricket fan and was the captain of his school cricket team.
His family did not possess a phone until he was 12.
He once tried to talk a friend out of working at Google before joining the company himself.
Sundar Pichai joined Google even before the company went public.
He is very good at remembering numbers and could remember every telephone number he dialed when he was young.
He interacts with students at IIT-Kharagpur over Skype at regular intervals.
He was also one of the top contenders for the post of CEO at Microsoft, which ultimately went to Satya Nadella.
The Google CEO is not at all “nerdy” as his appearance might suggest! He is actually very grounded, helpful and friendly.
He has been the master of ceremonies at Google I/O for the past few years.
It is rumoured that Twitter tried to poach Sundar Pichai, a few year back, while he was working at Google, but Google paid him an exorbitantly higher pay to retain him.
You May Like

Quotes By Sundar Pichai | Quote Of The Day | Top 100 Quotes

See the events in life of Sundar Pichai in Chronological Order