A versatile persona, Tyler Perry is famous as an actor, screenwriter, playwright, director, producer, author and songwriter. With the highly successful ‘Tyler Perry's House of Payne’, a TV series, he became one of the highest earning people in the entertainment business for the year 2011. His plays, films and sitcoms, based on the themes of typical African-American households, are very popular for their dramatization and satirical tones. His main character ‘Madea’, a grandmother, played by Perry himself, has garnered him immense fame. ‘Madea’ is a wise and brave woman, who is always protecting and taking care of family and friends, at all costs. Inspired by the personality of his mother, Perry created this character and gave her the best appeal ever. About this character, Oprah Winfrey once made a comment “I think that's what Madea really is: a compilation of all those strong black women that I know and maybe you do too? And so the reason it works is because people see themselves." She also believes in the fact that, since Perry was raised by a “strong, black women”, he was very much inspired to create a character which not only celebrates her, but also immortalizes her. Therefore, his subjects and themes which reflect the strength, weaknesses, achievements, failures and problems of the African-Americans, center on this character. American People
African Americans
Actors
Directors
Black Actors
Childhood & Early Life
Tyler was born as Emmitt Perry, Jr. to Emmitt Perry, Sr. and Willie Maxine Perry and has three more siblings.
As a child, he faced physical abuse from his father and even tried to commit suicide once - to save himself from the brutality. His mother was his only comfort, who would take him to the church every Sunday.
At the age of 16, he changed his name from Emmitt to Tyler to keep himself aloof from his father. He also dropped out from high school and later earned a General Educational Development (GED) degree.
While watching an episode of Oprah Winfrey's talk show, he heard a comment from someone who stated, writing can help overcome depression and provides strength. Inspired by the remark, he began writing letters addressed to himself which later served as the basis for the musical ‘I Know I've Been Changed’. The play was staged for the first time in 1992 in Atlanta. 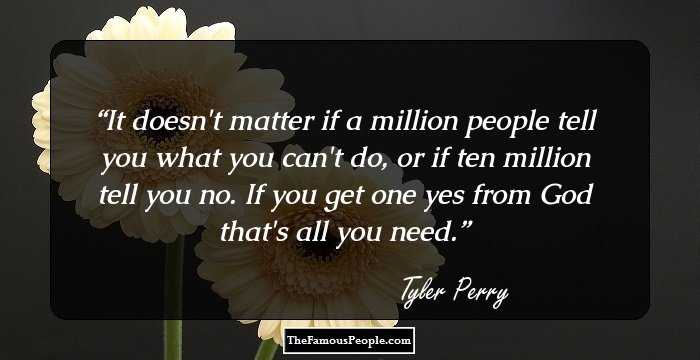 Quotes: You, God, Need
Continue Reading Below
Career
Financially weak, Perry staged the musical in several other places and did several odd jobs. At one point, he even lived in his car, yet he did not give up and rewrote and reproduced the musical repeatedly.
From 1998 to 2000, his play, ‘I Know I've Been Changed’ was finally liked by the critics and was staged at many places.
He came up with next play ‘I Can Do Bad All by Myself’ in 2000, which was an instant hit. In the play ‘Madea’, the central character, who was modeled after his mother and was played by Perry himself, stole the show.
He produced ‘Diary of a Mad Black Woman’ in 2001, followed by ‘Madea's Family Reunion’ the next year and both received positive reviews.
After coming up with ‘Madea's Class Reunion’ in 2003, he began touring to promote all of his plays.
In 2005, he made a big move towards the silver screen and made his debut film ‘Diary of a Mad Black Woman’. The movie was a huge success, especially among the African-Americans.
In 2006, he filmed ‘Madea's Family Reunion’ playing the role of ‘Madea’ himself. Following the success of the movie, he founded his own studio in Atlanta. On June 21, 2006, he launched his own television series ‘Tyler Perry's House of Payne’ on TBS cable network.
In 2006, he published his book, ‘Don't Make a Black Woman Take Off Her Earrings: Madea's Uninhibited Commentaries on Love and Life’ which became a best-seller.
His next venture was the romantic comedy-drama film, ‘Daddy's Little Girls’ in 2007.
Continue Reading Below
In 2008, he released ‘Meet the Browns’. It was so successful that they adapted it for a television sitcom the next year.
‘Madea Goes to Jail’ released in 2009 and was a massive success. Released a couple of years later, his comedy-drama film ‘Madea's Big Happy Family’ took the box-office by storm.
On March 29, 2013, he released ‘Temptation: Confessions of a Marriage Counselor’, a drama-thriller. 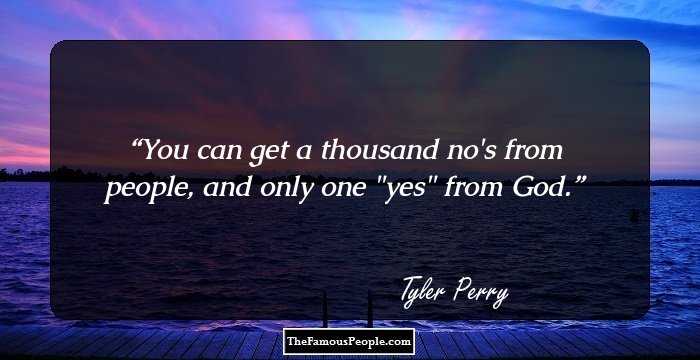 Quotes: You, God
Major Works
Perry’s most famous film, which earned a number of awards and nominations, is the romantic comedy-drama film ‘Diary of a Mad Black Woman’. Made with a humble budget of $5.5 million, the movie garnered a huge sum of $50.6 million, at the box-office.
‘Tyler Perry's House of Payne’ a comedy-drama series, was an immensely successful TV sitcom. It had a total of 254 episodes which exceeded any other TV series.
Awards & Achievements
Perry was awarded two BET (Black Entertainment Television) Awards for ‘Diary of a Mad Black Woman – the first in ‘Outstanding Actor in a Theatrical Film’ category and the second in ‘Outstanding Writing for Theatrical Film’ category.

In 2021, the Academy of Motion Picture Arts and Sciences bestowed upon�Perry the Jean Hersholt Humanitarian Award. 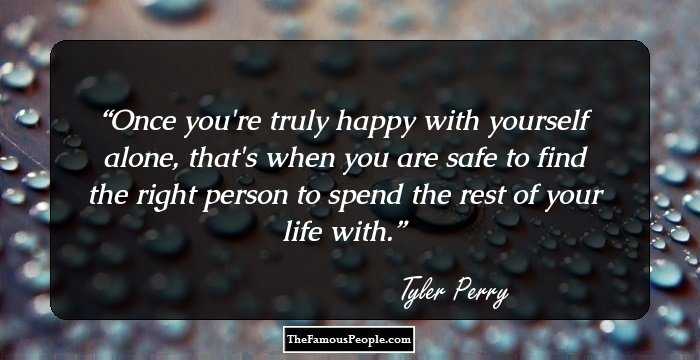 Quotes: You, Life, Yourself, Alone
Personal Life & Legacy
He funded a camp for 65 children from Philadelphia to visit ‘Walt Disney World’, on July 20, 2009. He calls himself a Christian and is very dedicated to the Black church.
He is a good friend of actor Will Smith, singer Janet Jackson and host/actress Oprah Winfrey.
Trivia
This actor, director, producer and screenwriter attended high school with the famous rapper Mystikal.

Quotes By Tyler Perry | Quote Of The Day | Top 100 Quotes

See the events in life of Tyler Perry in Chronological Order