(American Actor Known for His Films: 'Call Me by Your Name' and 'Beautiful Boy')

Timothée Chalamet is an American stage and film actor who stormed into the entertainment industry with his breakthrough role as Elio Perlman in the Luca Guadagnino-directed coming-of-age drama film 'Call Me by Your Name'. According to Olly Richards of 'Empire', his acting "alone would make the film worth watching". For his superb performance, he has been nominated for almost all the major awards including the 'Academy Award', 'BAFTA', 'Golden Globe', 'Screen Actors Guild Award' and 'Critics' Choice Movie Award'. He is the third youngest nominee for the Academy Award for Best Actor, and is expected to win the award. Beginning his career as a child artist for commercials, he has previously worked on the television series 'Law & Order', 'Royal Pains' and 'Homeland'. In his short career of less than a decade so far, he has already worked in films such as Christopher Nolan's 'Interstellar', Greta Gerwig's 'Lady Bird', Scott Cooper's 'Hostiles', as well as John Patrick Shanley's autobiographical play 'Prodigal Son'. American People
American Men
New Yorkers Actors
Columbia University
New York University
Childhood & Early Life
Timothée Hal Chalamet was born on December 27, 1995 in Hell's Kitchen, Manhattan, to Nicole Flender, a real estate broker and former Broadway dancer, and Marc Chalamet, an editor for UNICEF. He has an older sister named Pauline who is a French actor and lives in Paris.
He is half-French from his father's side and half-American Jewish from his mother's side. Filmmaker Rodman Flender is his maternal uncle, television producer and writer Amy Lippman is his aunt, and late screenwriter Harold Flender was his maternal grandfather.
While in high school, he was accepted into Fiorello H. LaGuardia High School of Music & Art and Performing Arts, which spurred his interest in acting at a young age. After graduating from school in 2013, he enrolled into Columbia University following the advice of Claire Danes, and was transferred to NYU Gallatin School of Individualized Study after a year. 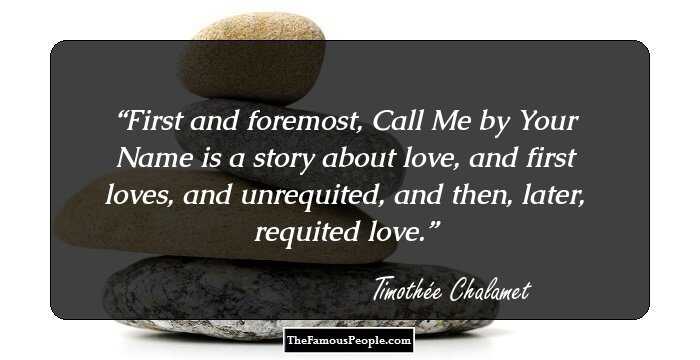 Quotes: Love
Continue Reading Below
Career
Timothée Chalamet began his acting career as a child artist appearing in a number of commercials and also acted in the two horror short films, 'Sweet Tooth' and 'Clown', in 2008.
In 2009, he made his television debut playing murder victim Eric Foley in the episode 'Pledge' of the long-running television series 'Law & Order', followed by a minor role in the made-for-television film 'Loving Leah'.
He made his stage debut in 2011, playing 12 years old sexually curious boy Nicholas in the Off-Broadway play 'The Talls', which is a coming-of-age comedy set in the 1970s. His excellent acting in the play was praised by the chief theatre critic of 'New York Daily News'.
In 2012, he bagged two recurring roles: playing Luke in the drama series 'Royal Pains' and Finn Walden in the spy-thriller series 'Homeland'. For the latter, he shared a nomination for a 'Screen Actors Guild Award for Outstanding Performance by an Ensemble in a Drama Series' with the rest of the cast.
He made his feature film debut with a small role in the Jason Reitman-directed drama film 'Men, Women & Children', which was a critical and commercial failure. The same year, he received positive reviews for playing the younger version of Sam, the co-lead in the comedy film 'Worst Friends', which had limited theatrical release.
However, his biggest role that year was portraying younger Tom Cooper, the son of the lead character played by Matthew McConaughey, in Christopher Nolan's blockbuster sci-fi movie 'Interstellar'. The film was a huge success at the box office and also received praise from critics for exceptional performance from the cast.
In Andrew Droz Palermo's 2015 fantasy-thriller 'One & Two', he played one of the leads, 16-year-old Zac who, along with his sister Eva, discovers supernatural abilities when their mother fall ill. Later that year, he portrayed the younger version of Stephen Elliott, the character played by James Franco, in Pamela Romanowsky's crime thriller 'The Adderall Diaries', and Charlie Cooper in the Christmas comedy 'Love the Coopers'.
He returned to stage in February 2016 after being handpicked by playwright and director John Patrick Shanley and producer Scott Rudin to play Jim Quinn in the autobiographical play 'Prodigal Son' at Manhattan Theatre Club. His portrayal of a young Shanley, a misfit Bronx kid in a prestigious New Hampshire prep school set in 1963, earned rave reviews from critics and won him many awards and nominations.
In 2016, he played the troubled student Billy opposite Lily Rabe in the independent film 'Miss Stevens'. Comparing him to James Dean, Stephen Holden of 'The New York Times' stated that he did not see a better performance of the climactic speech from 'Death of a Salesman'.
Continue Reading Below
His breakthrough role was starring as Elio Perlman, a 17-year-old Italian boy in the 1980s who falls in love with his father's assistant Oliver, in the 2017 coming-of-age drama film 'Call Me by Your Name'. His hard work of learning to speak Italian, play the guitar and the piano paid off as he received nomination in the 'Best Actor' category in many prestigious awards events, including 'Golden Globe' and 'Oscar'.
Later in 2017, he received positive reviews for portraying Daniel Middleton in the film 'Hot Summer Nights' and Kyle Scheible in Greta Gerwig's critically acclaimed solo directorial debut, 'Lady Bird'. The same year, he appeared alongside Christian Bale as soldier Philippe DeJardin in Scott Cooper's 'Hostiles'.
In 2018, he will portray methamphetamine addicted boy Nic Sheff in the upcoming drama film 'Beautiful Boy' based on the memoir of the same name by David Sheff. He is also slated to co-star with Selena Gomez in the Woody Allen film 'A Rainy Day in New York' and would play Henry V of England in David Michôd's film 'The King'. 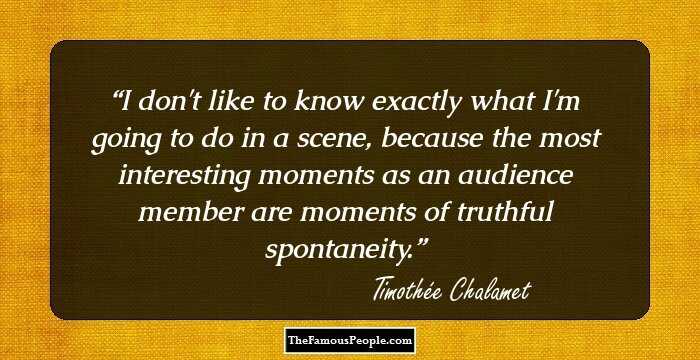 Major Works
Timothée Chalamet's most notable work so far is undoubtedly 'Call Me by Your Name' which has already grossed near $30 million against a budget of $3.5 million and received critical acclaim. His 2014 film 'Interstellar' grossed over $675 million worldwide.
Awards & Achievements
Timothée Chalamet has been nominated for an 'Academy Award for Best Actor' for his performance in 'Call Me by Your Name' and is a strong contender for the honor. He has also received nominations for 'BAFTA', 'Golden Globe', 'Screen Actors Guild Award', and 'Critics' Choice Movie Award' for the role.
For his performance in 'Lady Bird', he received nominations for a 'SAG Award' and a 'Critics' Choice Movie Award'. 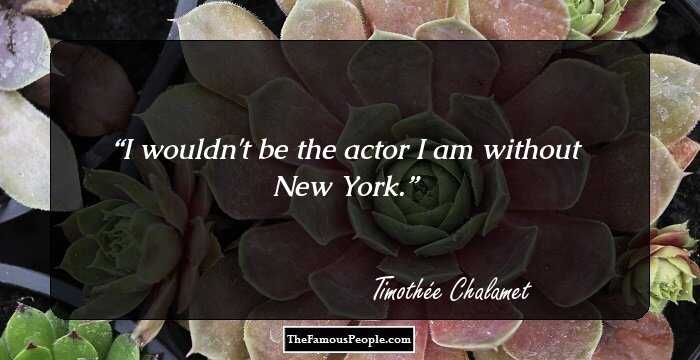 Personal Life & Legacy
In 2013, Timothée Chalamet was in a relationship with Lourdes Leon, the daughter of pop icon Madonna. She was his high school classmate and they appeared together in a school production of 'Sweet Charity'.
Following renewed sexual assault allegations against Woody Allen in the wake of the #MeToo movement in October 2017, he told media that he would not accept profits from his upcoming film with the director. By announcing to donate his salary to the Time's Up initiative against harassment and assault, LGBT Center of New York and RAINN, he became the most high profile male actor to publicly disavow Allen.
Trivia
Timothée Chalamet is a big football fan and as a child dreamed about becoming a footballer himself. At the age of 13, he used to coach young boys of six-to-ten years at a football camp in France.

Quotes By Timothée Chalamet | Quote Of The Day | Top 100 Quotes

See the events in life of Timothée Chalamet in Chronological Order