Leonardo Wilhelm DiCaprio is a renowned American actor and producer known for his good looks and exceptional acting skills. Making his entry through television in 1991, with Santa Barbara, he went on to become an international star. He ventured into the film world through a horror flick Critters 3 and continued with many more like This Boy’s Life, Titanic, The Man in the Iron Mask, and others. His participation in dramas like Romeo + Juliet, The Basketball Dairies, and Catch Me If You Can brought him tremendous acclaim. It was Titanic that served as a milestone in turning around his overall image as an actor. He received his first Golden Globe Award post Titanic. He has touched upon various genres of cinema ranging from romance, historical and period drama, thriller, and even science fiction. He has received some of the most coveted honors, such as the Golden Globe Awards for Best Actor in a Drama, Musical or Comedy for his performance in films like The Aviator and The Wolf of Wall Street, and the Academy Award for Best Actor for the movie The Revenant. Apart from being a producer and an actor, Leonardo DiCaprio is also a philanthropist. His concern for the society and the environment is clearly evident from the donations he makes towards wildlife and environment conservational groups. Leonardo DiCaprio was born on November 11, 1974, in Los Angeles, California, as the only child to Irmelin, a legal secretary by profession, and George DiCaprio, who was a comic artist, producer, and distributor of comic books.

He was only 1 year old when his parents separated and he spent his childhood with his mother who changed several residences to earn a living.

Though living away from his father, Leonardo was always close to his father who urged him to explore the creative side of his personality.

He spent a part of his childhood with his maternal grandparents in Germany.

He was sent to Los Angeles Center for Enriched Studies for 4 years, after which he joined the Seeds Elementary School.

He joined John Marshall High School which he eventually left after three years and ended up attaining only a general equivalency diploma (GED). 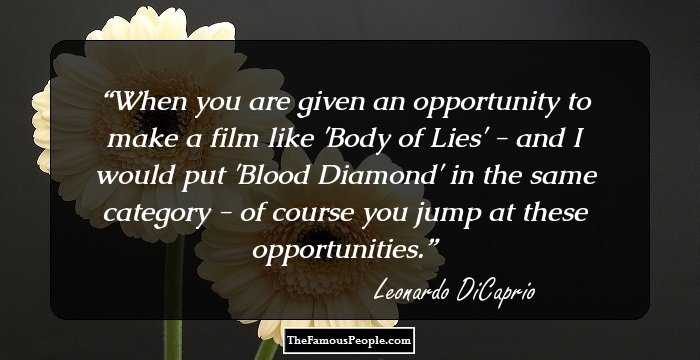 His love for acting could be seen early on in his interests in imitating people, playing pranks with his parents, and performing self-created skits.

At the age of 5, he was a part of a television series for children called Romper Room, which he could not carry for long due to being troublesome at such a tender age.

He started with making small appearances in commercials and educational films, the ad for Matchbox Cars being his first at the age of fourteen.

It was in 1990, that he made his debut in television through a short series based on a comedy movie Parenthood for which he earned a nomination for the Young Artist Award for Best Young Actor.

Later on, he made appearances in shows, such as The New Lassie and Roseanne.

A major turning point in his career came in 1991, when he participated in the family comedy Growing Pains and made his film debut with the horror movie Critters 3.

It was in 1993, that his work was widely acclaimed even by the critics in This Boy’s Life opposite Robert De Niro, which was a movie based on disturbed relations between a son and a stepfather.

Another feather on his cap came with the movie What’s Eating Gilbert Grape in 1993. He starred along with Johnny Depp in the movie.

It was after 1995, that his career grew exponentially with his films on diverse subjects like The Basketball Diaries and The Quick and the Dead.

Leonardo DiCaprio also played the role of Romeo opposite Claire Danes as Juliet in Shakespeare’s inspired movie Romeo + Juliet by Baz Luhrmann in 1996.

Leonardo’s career touched new heights with the release of the tragic love story Titanic by James Cameron, opposite Kate Winslet in 1997. It crossed a budget of over $200 million, thereby becoming the most expensive film ever made. With the grand success of the film, Leonardo DiCaprio proved his capabilities in handling lead roles in Hollywood.

His performances in The Aviator (2004), Blood Diamond (2006), and The Departed (2006) were well-acclaimed and received Academy Award nominations. Leonardo also wrote a documentary in 2007 with environment as its main subject. He has partnered with Netflix for the production of more such documentaries.

He performed in a biographical drama titled J. Edgar in 2011, backing up his performance with lot of research. He portrayed the FBI director J. Edgar Hoover in the film and received much appreciation for his subtle and persuasive performance.

In 2013, he played former stockbroker Jordan Belfort in the black comedy film The Wolf of Wall Street, directed by Martin Scorsese. The movie, a recollection of Belfort's perspective on his career as a stockbroker in New York City, was adapted from the memoir of the same name by Jordan Belfort.

DiCaprio starred in The Revenant in 2015. The film, based in part on Michael Punke's novel with the same title, was inspired by the experiences of frontiersman Hugh Glass, portrayed by Leonardo DiCaprio.

After playing Rick Dalton in the Quentin Tarantino-directed comedy-drama film Once Upon a Time in Hollywood in 2019, Leonardo DiCaprio went on to portray Dr. Randall Mindy in the science fiction black comedy film Don't Look Up, which released in 2021. 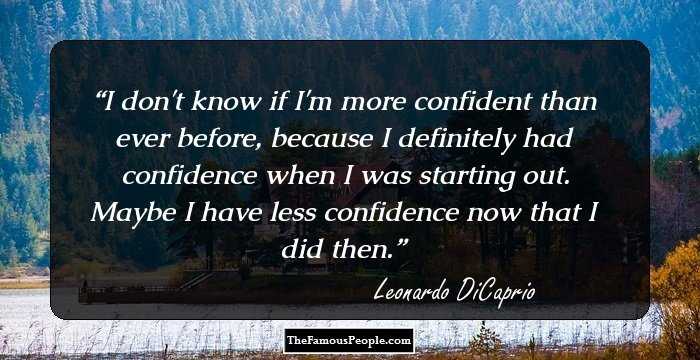 The 1997 disaster film Titanic is unarguably one of DiCaprio’s best performances. His portrayal of the poor artist Jack Dawson in the movie captivated the audience and catapulted DiCaprio to superstardom. The film received mainly positive reviews from film critics and became a mega commercial hit.

He played the role of Hugh Glass, an American frontiersman and explorer in the film The Revenant, a survival western thriller film. The film received positive reviews, mostly for its performances, direction, and cinematography, and earned DiCaprio several prestigious awards.

His performance as a mentally disabled kid in What’s Eating Gilbert Grape was recognized with an Academy Award nomination for Best Supporting Actor.

Titanic received 14 Academy Award nominations out of which the film won 11. Leonardo DiCaprio’s popularity skyrocketed and he entered the People magazine’s list of 50 Most Beautiful People in 1997 and 1998.

He won the Satellite Award for Best Supporting Actor for his work in The Departed.

He was nominated in the Best Actor category at the Golden Globes as well as the Screen Actors Guild.

He has been active as a socially responsible citizen, which is evident from his concern for the environment. The year 2000 that saw his participation for the celebration of the Earth Day and an interview with President Bill Clinton on the issue of global warming says it all.

He has also been actively involved on the boards of the World Wildlife Fund, Natural Resources Defense Council, and International Fund for Animal Welfare.

He is also closely associated with the Leonardo DiCaprio Fund at California Community Foundation as the non-profit set up that works on various environmental issues.

He won a nomination for the VH1 Do Something Award in 2010 for his contribution in the field of environmental issues.

He was appointed as the United Nations representative on climate change in the year 2014.

Leonardo DiCaprio won the Academy Award for Best Actor in 2016 for the movie The Revenant. 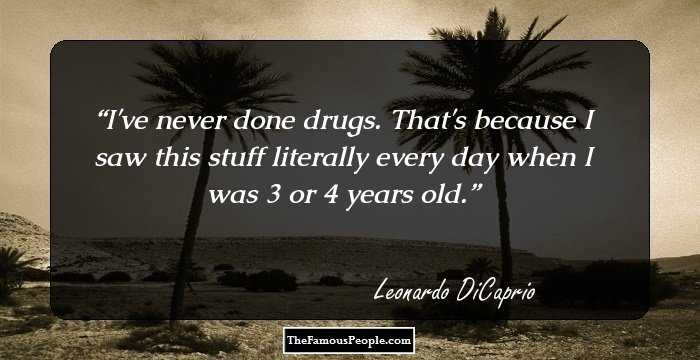 Leonardo’s personal life has always been in media limelight due to the number of affairs he has had. His link ups and break ups with models like Gisele Bundchen, Bar Refaeli, and Toni Garrn have made headlines in gossip magazines. From 2017 to 2022, he was romantically linked to Camila Morrone.

He incurred a severe facial injury in the year 2005, when a model named Aretha Wilson hit him with a broken bottle.

He was also in a relationship with actress Blake Lively in the year 2011.

Leonardo owns a house in Los Angeles and an apartment in Battery Park City, Lower Manhattan.

He owns an island in Belize which he purchased in 2009, with the plan of crafting an eco-friendly resort. He also bought the original Dinah Shore residence in 2014, which is crafted on the architectural designs of Donald Wexler in Palm Springs.

He has made several donations for various societal concerns. He made a donation of $1 million to the Wildlife Conservation Society in November 2010. Being a gay rights activist, he donated $61000 to GLAAD. He also donated $35000 for Leonardo DiCaprio Computer Center at Los Feliz branch of the Los Angeles Public Library in 1998 and $1 million for the relief work after Haiti earthquake in 2010.

Quotes By Leonardo DiCaprio | Quote Of The Day | Top 100 Quotes

See the events in life of Leonardo DiCaprio in Chronological Order