(Actress and Ex-Wife of Johnny Depp)

Amber Heard is an American actress from Texas who has starred in various movies in different and unconventional roles. She began her acting career with the sports drama ‘Friday Night Lights’ and soon appeared in various small characters. Her breakthrough arrived when she was recognized as a supporting actress in several box-office successes, including ‘The Pineapple Express’ and ‘Never Back Down’. She gained recognition from these movies and soon began to star as the lead actress. She has since been a part of several commercially successful films and has been noticed for her taut and convincing performances. Raised in Austin, Heard is known to have made her way through Hollywood through grit and determination as she came from a humble background. She is known for her spiritedness and never-say-die attitude as she had to battle a cancelled TV series, several unsuccessful releases, and many unfavorable reviews. Despite this, she has continued to be a part of many films and has earned many awards. Apart from films, Heard is an activist as well. From 2015 to 2017, Heard was married to actor Johnny Depp, and their divorce drew a lot of media attention as Heard alleged that Depp had been verbally and physically abusive throughout their relationship. She has spoken openly and raised awareness about domestic violence and sexual abuse. The death of her best friend when Heard was sixteen affected her deeply. She was disenchanted with religion and veered toward atheism as she was heavily influenced by Ayn Rand’s ideas around this time. She eventually dropped out of school at seventeen and moved to New York City to pursue modelling. 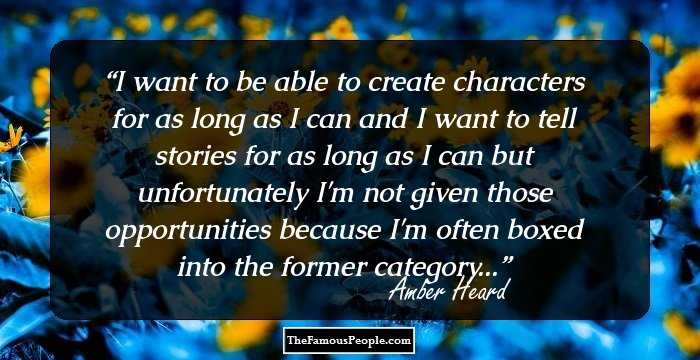 Quotes: Character
Continue Reading Below
Career
Amber Heard’s initial appearances were in two music videos, Kenny Chesnet’s ‘There Goes My Life’ and Eisley’s ‘I Wasn’t Prepared’. She made several cameo appearances in many primetime dramas, including ‘Jack & Bobby’, ‘The Mountain’, and ‘The O.C.’. Her debut film ‘Friday Night Lights’ (2004) was a commercial success.
In the next couple of years, she appeared in minor roles in various films such as ‘Drop Dead Sexy’ (2005), ‘Price to Pay’ (2006), ‘You Are Here (2006)’, and ‘Alpha Dog’ (2006). She also appeared in an episode of ‘Criminal Minds’.
Soon, she began starring in more noticeable roles. In ‘North Country’ (2005), she played younger version of Charlize Theron’s character. She also acted in the horror movie ‘Side FX’ (2005).
In 2007, she was cast as a lead character in ‘Hidden Palms’, a teen drama. This didn’t receive positive reviews and was cancelled after 8 episodes. Subsequently, she acted in the short movie ‘Day 73 with Sarah’; an indie drama ‘Remember the Daze’; and in an episode of ‘Californication’.
In 2008, her supporting roles in the movies ‘Pineapple Express’ and ‘Never Back Down’ helped her gain mainstream recognition. Her other films in the same year included ‘The Informers’, which was shunned by critics and ‘All the Boys Love Mandy Lane’, in which her performance was appreaciated.
She starred in the movies ‘The Stepfather’, ‘ExTerminators’, ‘Zombieland’, and ‘The Joneses’ in 2009. In 2010, her releases included ‘The River Why’ and ‘The Ward.’ She co-produced and acted in the thriller ‘And Soon the Darkness.’ She was regularly noticed and praised by film critics during this period.
She was cast as the female lead opposite Johnny Depp in ‘The Rum Diary’ (2011). The movie wasn’t a success and received mixed reviews. Later in the year, she starred in ‘Drive Angry’ alongside Nicholas Cage. She also appeared on ‘Top Gear’, a BBC program.

After a brief interlude, Heard’s 2013, releases included the thriller ‘Paranoia’, the action-comedy ‘Machete Kills’, and the satire ‘Syrup’. Her solo film for 2014 was ‘3 Days to Kill’, which was a commercial success.

2015, marked a turning point in her career as she had four releases in the year. She played a photographer in ‘Magic Mike XXL’ and a ballet dancer in ‘The Danish Girl’. These were successful at the box office. The other films were ‘The Adderall Diaries’ and ‘One More Time’.

Continue Reading Below
She played the female protagonist in ‘London Fields’, an adaptation of Martin Amis’s novel. Though it was scheduled to premiere at the Toronto International Film Festival in 2015, it was pulled out owing to disagreements between the director and the producers.
In the popular film ‘Justice League’ (2017), she played Aquaman’s Atlantean queen Mera. She is slated for a repeat of the same role in ‘Aquaman’ (2018). 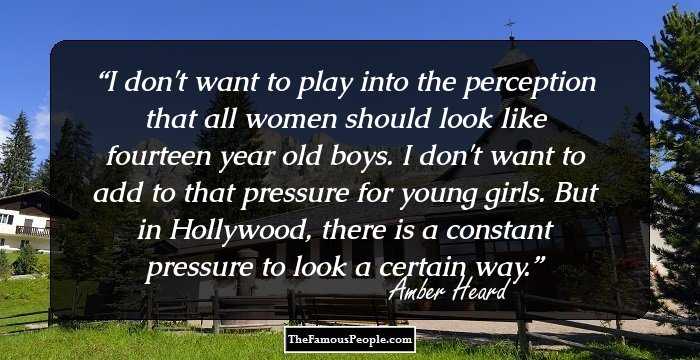 Major Works
Amber Heard’s first leap to acclaim happened with the teen slasher film ‘All the Boys Love Mandy Love’. It received mixed reviews, but Heard’s performance was widely praised.
She rose to prominence with ‘The Rum Diary’, an adaptation of the novel by Hunter S Thompson. She played Johnny Depp’s love interest, and the chemistry between them was instantly noticed. She won her first award for this film.
Personal Life & Legacy

Amber Heard has refused the conventional labels to define one’s sexual orientation. She came out at an event in 2010, and has acknowledged that she has had relationships with both men and women.

She dated the Mexican actor, Valentino Lanus. for a year before breaking up in 2006. She was in a relationship with the American actor and singer, Mark Wystrach, for a while before ending it in 2007.
She was in a relationship with the photographer, Tasya van Ree, from 2008 to 2012. It was during this relationship that she publicly came out.
She started dating her co-star, Johnny Depp, while filming ‘The Rum Diary’ in 2011 and soon began living together. They married in a private civil ceremony on February 3, 2015. Later, she filed for divorce on May 23, 2016.
Continue Reading Below

She and Depp were accused of breaching Australia’s biosecurity laws in April, 2015, because they failed to declare the two Yorkshire terriers to the Australian Customs Service when they flew by private jet. They pleaded guilty and were issued a $1,000 fine along with a one-month good behavior bond.

Her relationship with Depp was turbulent. She obtained a temporary restraining order from him on the grounds that Depp was verbally and physically abusive. In a series of legal proceedings, there were many other incidents of abuse that came to light. Images of her injuries were published by People magazine.

A settlement between Depp and Heard was reached on August 16, 2016, and the divorce was later finalized. She was granted $7 million, which has been said to be donated to the American Civil Liberties Union and the Children's Hospital Los Angeles.

She dated the business magnate, Elon Musk, for almost a year before they split in August 2017. They continue to remain close friends. 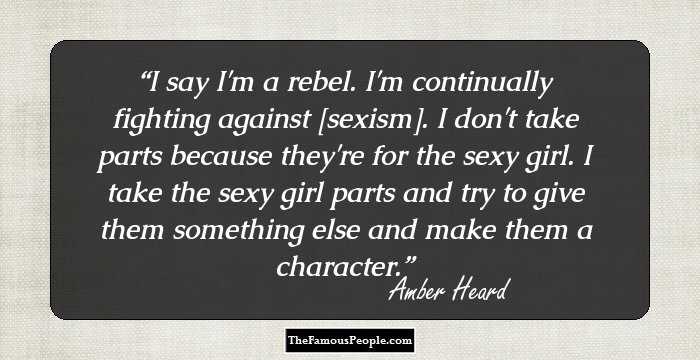 Quotes: Character
Divorce With Johnny Depp And The Subsequent Controversies

Post her much-publicized divorce with Johnny Depp, the couple has remained in news related to their accusations of Depp being an "abusive husband." In 2018, Depp sued the British tabloid "The Sun" for defamation, but the judge hearing the case observed that the publication calling him a "wife beater" was "substancially true."

Trivia
She is a certified lifeguard, and it was one of her summer jobs.
She is an avid reader and generally packs several books before leaving anywhere. She even has a tattoo of a line from Omar Khayyám’s poem on her side.

Quotes By Amber Heard | Quote Of The Day | Top 100 Quotes

See the events in life of Amber Heard in Chronological Order