Advanced Search
David Ellison is a renowned American movie producer, a billionaire, and the CEO of ‘Skydance Media’. Born to billionaire parents, he made his debut in Hollywood as an actor-producer. In spite of a very rough start, he left acting to executive produce some of the biggest blockbusters of the last decade. Some of David Ellison’s best-known movies as a producer are, ‘True Grit’, ‘Star Trek Into Darkness’, ‘Mission: Impossible – Rogue Nation’, ‘Mission: Impossible – Fallout’, ‘Terminator: Dark Fate’, and ‘Top Gun: Maverick’. He has also gone on to create immensely successful companies like ‘Skydance Television’ and ‘Skydance Interactive’. If that wasn’t enough, he has also made his journey to the world of online streaming platforms like ‘Netflix’ and ‘Amazon Prime’. ‘Altered Carbon’ and ‘Tom Clancy’s Jack Ryan’ are two of his highest-rated shows. Known for living his life large, David is also a trained and licensed stunt and commercial pilot and likes driving expensive cars. Michael B. Jordan
DID WE MISS SOMEONE?
CLICK HERE AND TELL US
WE'LL MAKE SURE
THEY'RE HERE A.S.A.P
Quick Facts 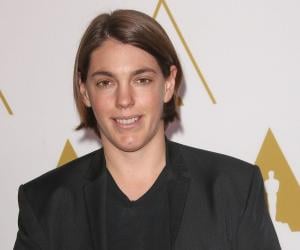 American People
American Men
University Of Southern California
Tall Celebrities
Tall Male Celebrities
Career
Acclaimed movie producer, David Ellison’s love for movies was instilled in him since childhood. While in high school, he worked for two summers as a developer for his father, Larry Ellison, the founder of ‘Oracle’. However, David Ellison left his father’s business and started attending film school at the ‘University of Southern California’. He quit and went on to produce short films like ‘The Sound of Football’ (2004) and ‘Somebody Else’ (2005).
In 2005, he made his acting debut in a small role in ‘The Chumscrubber’. He would later write, direct, produce, and star in the short ‘When All Else Fails’ (2005). In 2006, David Ellison founded the production company ‘Skydance Media’. The first movie out of the production studio was the World War 1 drama ‘Flyboys’ (2006). Unfortunately, the movie made a mere US $17 million against a budget of US $60 million. The critical and commercial failure of the movie sent David to depression and hospitalization.
In 2009, ‘Skydance Media’ made a US $450 million co-financing deal with ‘Paramount Pictures Corporation’. The first movie to come out of this deal was ‘True Grit’ (2010) with Ellison as the executive producer. The movie was a major hit with a box-office haul of more than US $252 million. It also won ten ‘Academy Award’ nominations. The TV series ‘Leverage’ (2010) was his last acting venture.
The same year in August 2010, he also finalized a four-year US $200 million revolving-credit facility deal with ‘JPMorgan Chase & Co.’. In 2011, David Ellison executive-produced ‘Mission: Impossible - Ghost Protocol’. The movie generated profits of more than US $694 million. In spite of being critical failures, he then delivered two box-office hits in ‘Jack Reacher’ (2012) and ‘G.I. Joe: Retaliation’ (2013).
In 2013, David Ellison executive-produced two of the biggest hits of the year in ‘Star Trek Into Darkness’ and ‘World War Z’, which made more than US $300 million in profits, each. In May 2013, ‘Skydance Media’ branched out to ‘Skydance Television’ and also renewed its four years deal with ‘Paramount Pictures’. Ellison went on to executive-produce the acclaimed TV series, ‘Manhattan’ (2014 – 2015) and ‘Grace and Frankie’ (2015 – present).
‘Jack Ryan: Shadow Recruit’ (2014) was a failure, but ‘Terminator Genisys’ (2015) was financially successful. He followed that up with the massive hit ‘Mission: Impossible – Rogue Nation’ (2015). The movie made more than US $682 million at the box-office. In 2016, he formed the gaming studio ‘Skydance Interactive’. The first VR game ‘Archangel’ was released on July 18, 2017, and ‘The Walking Dead: Saints and Sinners’ is in development.
Ellison had a string of bad luck in movies with flops like ‘Star Trek Beyond’ (2016), ‘Baywatch’ (2017), and ‘Geostorm’ (2017). ‘Annihilation’ (2018) was critically praised but failed miserably at the box-office. However, David Ellison redeemed himself by delivering ‘Mission: Impossible – Fallout’ (2018). It was the highest-grossing movie of the series with a box-office haul of more than US $792 million. In 2018, he also produced hit series like ‘Altered Carbon’, ‘Dietland’, and ‘Jack Ryan’. His upcoming projects include the highly anticipated ‘Gemini Man’ (October 11, 2019), ‘Terminator: Dark Fate’ (November 1, 2019), and ‘Top Gun Maverick’ (June 26, 2020), to name a few. He is also producing the show ‘Foundation Series’ for ‘Apple’.
Controversies & Scandals
In January 2019, ‘Skydance Media’ hired John Lasseter to be the head of its animation division. Lasseter was fired from ‘Pixar’ for sexual harassment. David was forced to release a statement defending his decision and host a town hall.
Family & Personal Life
David Ellison was born on January 9, 1983, in Santa Clara County, California, USA. His father is billionaire Larry Ellison and his mother is Larry’s ex-wife Barbara Boothe Ellison. His sister is movie producer, Megan Ellison (born January 31, 1986). He has been happily married to Sandra Lynn Modic’ since October 1, 2011.

See the events in life of David Ellison in Chronological Order