He once quoted in an interview ‘I write to escape…to escape poverty’. After trying his hand in a dozen different jobs, little did Edgar Rice Burroughs know that destiny had a prospering future in his writing. After a series of failures in almost all jobs and ventures he tried, he created a masterpiece, which, till date, continues to entertain kids and adults alike. Just a browse through pulp magazines that published rot material, his decision to write fiction (termed rotten by himself) changed his life forever. His creation of the Apeman, Tarzan, belonging to the jungles of Africa, and his wife, Jane was received largely and accepted across the America, and later, all over the world. Today, it is considered to be the most successful fictional character ever created and adored by Tarzan fans. He, then, continued writing on varied areas, including social commentaries, detective stories, westerns, historical romances, Earthly adventures, and tales of the Moon, including numerous Tarzan books. His hard work and determination to provide financial support to his family enabled him to develop an idea which, still, remains unusual and ingenious. H. P. Lovecraft
1st September In History
DID WE MISS SOMEONE?
CLICK HERE AND TELL US
WE'LL MAKE SURE
THEY'RE HERE A.S.A.P
Quick Facts

American Celebrities
Science Fiction Writers
American Men
Male Writers
Virgo Writers
Childhood & Early Life
Burroughs was born on September 1, 1875 in Chicago, Illinois, as the fourth son to Major George Tyler Burroughs, who served in the Union army during the Civil War, and Mary Evaline Zieger Burroughs.
He received his formal education at various public and private schools, due to the outbreak of various deadly diseases. He learnt Greek and Latin, and later English composition.
In 1891, when the influenza epidemic broke out, his parents sent him to Idaho, where two of his brothers, Harry and George, were running a ranch at the Raft River.
His parents called him back after six months and sent him to Philips Academy in Andover, Massachusetts, where he was expelled after the first semester due to his rebellious acts against the existing curriculum.
To get him disciplined, his father sent him to Michigan Military Academy, Orchard Lake, in 1892, where he made another attempt to escape in the first year, but gradually found the atmosphere favorable and graduated in 1895. 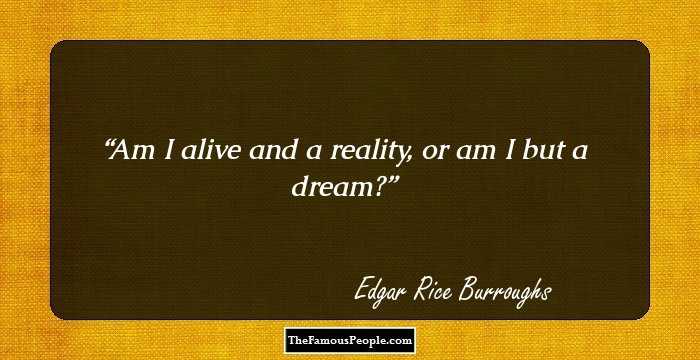 Quotes: I
Continue Reading Below
Career
After graduating, he worked as an instructor and assistant commandant where he taught geology, cavalry, and Gatling gun for a brief period.
He prepared for the United States Military Academy (West Point) entrance examination, but failed to clear and was hence, deployed in the ‘B’ Troop of the 7th US Cavalry at Fort Grant, Arizona Territory.
Just before being promoted to officer grade, he was diagnosed with a heart murmur during a routine medical check-up and discharged off his duties in 1897.
He opened a stationery store in Idaho, went to Snake River ranch to his brothers, joined his father in Chicago at the American Battery Company in 1899 and returned to his brothers’ gold dredging business, but felt dissatisfied.
In 1904, he went to Salt Lake City, Utah, and worked as a railroad policeman. He worked with Champlain Yardley Company in 1910 and System Service Bureau in 1912, but was heavily frustrated and depressed, and saw only failures.
He became a lead pencil sharpener wholesaler, where he was struck by the idea of writing fiction after browsing through pulp all-fiction magazines.
In 1912, he wrote his first serialized story ‘A Princess of Mars’ under the title ‘Under The Moons of Mars’ which was published in ‘The All-Story’ magazine under the pen name, Norman Bean.
The ‘Barsoom’ series in ‘Under the Moons of Mars’ got him $400 as his first pay, which was published as a book in 1917.
After his second novel ‘The Outlaw of Torn’ was rejected by Al-Story’s editor, Thomas Newell Metcalf, he wrote his third fiction ‘Tarzan of the Apes’ in 1912, which earned him $700.
Continue Reading Below
In 1919, when he became financially strong, he moved to San Fernando Valley, California, with his family and bought a large 550-acre estate, later renaming it Tarzana Ranch.
By serving as a war correspondent in the South Pacific, he became one of the oldest American journalists in the World War II, in December 1941, covering news for United Press.
He returned home at the end of the war after suffering many heart attacks and settled in Encino, California. 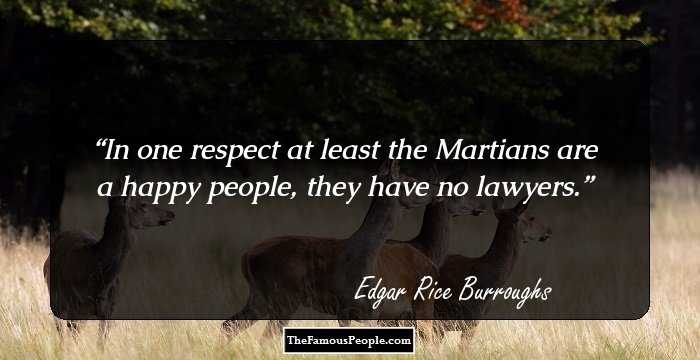 Major Works
His novel ‘Tarzan of the Apes’, a story about the son of an English nobleman abandoned and raised by apes in the African jungle, became a runaway hit.
Some of his fictional stories included ‘At the Earth’s Core’ (1922), ‘The Land That Time Forgot’ (1924), ‘The Eternal Savage’ (1925), ‘The Cave Girl’ (1925), ‘The War Chief’ (1927), ‘The Monster Men’ (1929), and ‘Pirates of Venus’ (1934).
In 1923, he became one of the first authors to launch his company, Edgar Rice Burroughs Inc. and print his own stories and books.
Awards & Achievements
His best-selling adventure novel ‘Tarzan of the Apes’ was released as a silent movie in 1918, starring Elmo Lincoln, and made a record, grossing more than one million dollars.
Ever since the fictional jungle hero, Tarzan, was introduced to the world, 41 films have been produced and 57 one-hour television episodes have been telecast, each one being a major hit.
Continue Reading Below
The first sound Tarzan movie ’Tarzan the Ape Man’ was released by MGM in 1932, featuring Johnny Weissmuller in the lead role.
In 1932, the first radio show on Tarzan adventures was produced, where his daughter played Jane and her husband Tarzan.
A new series featuring half-hour episodes was started in 1951 and aired every Sunday night, which was produced for a year.
During his lifetime, he penned 91 novels, of which 26 were on Tarzan, with millions of copies published and sold in over 34 languages across the world, including Russian, Hebrew and Esperanto. 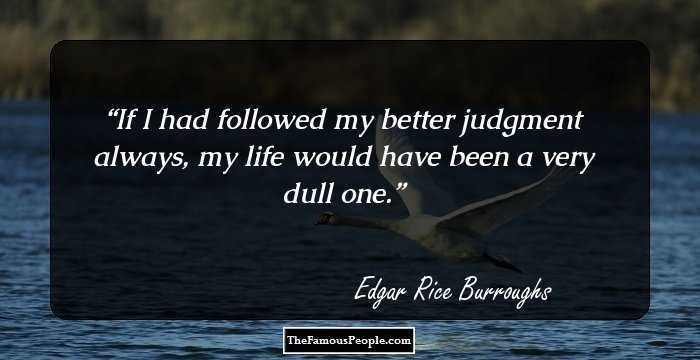 Quotes: Life, I
Personal Life & Legacy
In January 1900, Burroughs married his childhood love, Emma Centennia Hulbert, who traveled with him and supported him during his struggle for over 11 years. The couple had three children - Joan in 1908, Hulbert in 1909 and John Coleman in 1913.
He divorced Emma in 1934, and four months later, married actress and divorcee Florence Gilbert Dearholt, thus adopting her two kids. However, the relationship ended with a divorce in 1941, due to his increased alcoholism habits.
He died on March 19, 1950 at his home in Encino, California, of a heart ailment. His ashes were laid to rest at his corporation headquarters on Ventura Boulevard, under a black walnut tree.
Upon the popularity of the first ‘Tarzan of the Apes’, a community in Texas was named Tarzan in 1927 by US Postal Service.
In 1930, ‘Tarzana’ was voted as the name for the new suburb surrounding the Tarzana Ranch by its residents, upon the establishment of a new post office.
He was honored by the Science Fiction Hall of Fame in 2003.
Trivia
The highly acclaimed ‘Tarzan of the Apes’ was published by A.C. McClurg and Co. after it was rejected by almost all book publishers, and became the best-selling book of 1914.
His war mission on the Pearl Harbor attack is included in the novel ‘Don’t Go Near the Water’, written by William Brinkley.