Earl Warren was a famous American politician and jurist, who served the country as the Governor of California and the Chief Justice of the United States. He is one of the only two Americans who served as the Governor of California for three consecutive terms. He is known for his ‘no nonsense’ stance as the Governor of California where he very strictly dealt with the financial as well as social causes of the state and his reputation as a progressive Governor fetched him the prestigious position of the Chief Justice of the United States. As the Chief Justice of the United States, better known as the ‘Superchief’, Warren was known for bringing liberal changes into the society and law and order through the court, such as, bringing an end to school segregation, protecting the basic rights of the accused like making an amendment in the law which states that the police cannot unlawfully secure the evidence against the accused, ending public-school-sponsored prayer, etc. He made pioneering decisions on famous cases like: Brown v. Board of Education (1954), Gideon v. Wainwright (1963), Reynolds v. Sims (1964), and Miranda v. Arizona (1966).
Continue Reading Below American Celebrities
Chief Justices
Political Leaders
American Men
University Of California, Berkeley
Childhood & Early Life
Earl Warren was born in Los Angeles, California, in a working class family of Norwegian immigrants. His father worked with Southern Pacific Railroad and was murdered during a robbery in Bakersfield.
Warren went to the Bakersfield High School and graduated from the University of California, Berkeley in 1912. After graduating, he worked for Associated Oil Company in San Francisco and then shifted to Robinson & Robinson in Oakland.
In 1917, Warren got himself enlisted in the U.S. Army during World War I and was discharged after a year as the 1st Lieutenant. 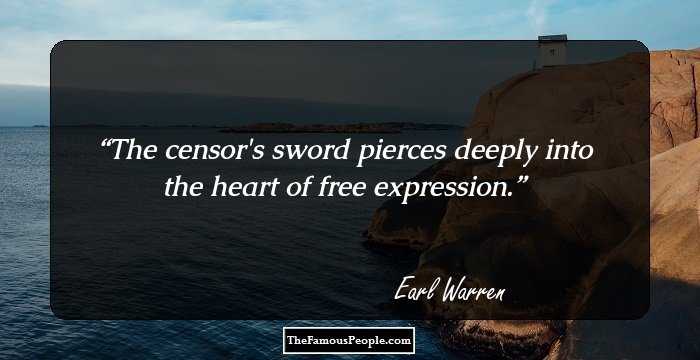 The Hottest Male Celebrities With The Best Abs
Career
In 1925, Warren was appointed as the district attorney of Alameda County and he remained in the position for a longtime as he was re-elected to 3 four-year terms, one after the other. He was tough on crime during his terms.
As Attorney General of California, Warren was the moving force behind Japanese internment during World War II - the compulsory removal of 120,000 Americans of Japanese descent to inland internment camps, without any charges or due process.
In 1942, Warren with his reputation of being the impeccable district attorney was elected as the Governor of California. He was the first American to be elected as the Governor of California three times in a row.
In his position as the Governor, Warren was very progressive with his workings and was particularly famous for aggressively working towards building a more stable financial structure post war. He also worked towards building up state’s higher education system.
In 1948, he tried for the Vice President elections on the Republican ticket but lost the same to the Democratic President Harry S. Truman, although he was highly favored to win with his reputation as the progressive Governor.
In 1954, Warren was appointed as the Chief Justice of the United States by General Dwight D. Eisenhower as he believed that the political, economic and social thinking that Warren represented was important to be introduced in the court.
During his time as the Chief Justice of the United States, Warren was famous for being a liberal and his decision on ‘Brown v. Board of Education (1954)’ made him particularly famous.
Referring to the case he said that "in the field of public education the doctrine of 'separate but equal' has no place. Separate educational facilities are inherently unequal." Such statements made him famous as liberal and judicial activist.
During the 1961 decision in the case of ‘Mapp v. Ohio’, Warren very vehemently maintained that evidences against the suspect acquired through unlawful, sneaky search or seizure will not be used against the suspect in the court.
Continue Reading Below
With the Supreme Court work, Warren also ran the investigation into the assassination of President John F. Kennedy in 1963-64. He was summoned by President Johnson to serve on the investigative committee, which became famous as the Warren Commission.
Year 1966 is supposedly the most controversial year of his career. He gave out one of his most contentious decisions in ‘Miranda v. Arizona’, stating that a suspect should be informed of certain rights at the time of his or her arrest.
Warren left a deep impact as the Chief Justice of America. He was known for making numerous rulings on civil rights, separation of the church and the state, and police arrest procedure in the United States. He retired in 1969. 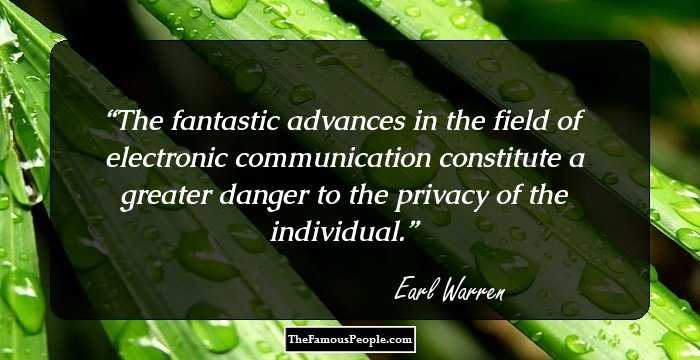 Major Works
The most important work of Warren’s political and judicial career is considered to be the liberalized revolution and civil rights empowerment that he brought into the American society through his role as the Chief Justice of America.
Personal Life & Legacy
Warren got married to Swedish-born widow Nina Elisabeth Palmquist Meyers in 1925 and they both had six children together.
He died in 1974, five years after his retirement, and his funeral was held at the Washington National Cathedral. He was buried at the Arlington National Cemetery. 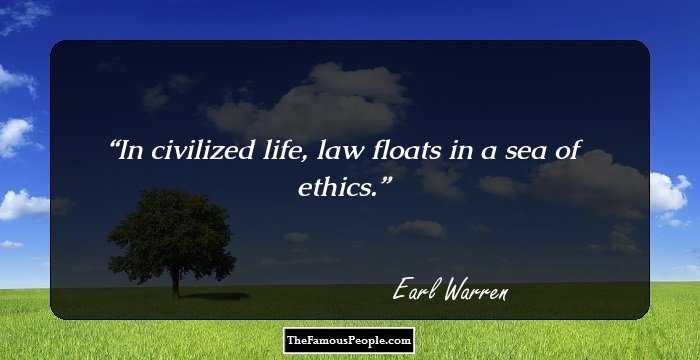 Trivia
Warren was inducted into the California Hall of Fame, located at The California Museum for History, Women and the Arts by California Governor Arnold Schwarzenegger and First Lady of California Maria Shriver.
Recommended Lists:
Leaders #294
Lawyers & Judges #59
You May Like

Quotes By Earl Warren | Quote Of The Day | Top 100 Quotes

See the events in life of Earl Warren in Chronological Order