Edward Estlin Cummings was an American poet as well as a painter, essayist, author and playwright. Being one of the most innovative poets of his time, his body of work included 2,900 poems, four plays and several essays, as well as numerous drawings and paintings. Cummings is well known for creating poetry using his own personal style by experimenting with poetic forms and languages, as well as revising grammatical rules to suit his own purposes. But despite going against traditional forms of poetry, his work was loved by readers and they became highly popular. He is also remembered for his attacks on conventional patterns of thought and criticisms on how society restricted free expression. Also ranked among the best loved poets of his time, he mainly wrote poems dealing with themes such as love, childhood, nature, etc. He is known for his children’s novels as well. Cummings can be considered as the second best poet in America of his time, next only to the famous Robert Frost. William Faulkner
DID WE MISS SOMEONE?
CLICK HERE AND TELL US
WE'LL MAKE SURE
THEY'RE HERE A.S.A.P
Quick Facts

American Celebrities
American Men
Harvard University
Libra Poets
Male Poets
Childhood & Early Life
E. E. Cummings was born on 14 October, 1894, to a well known family in Cambridge, Massachusetts. His father, Edward Cummings, was a professor at Harvard University, and later a minister at Old South Church in Boston. His mother Rebecca Haswell Clarke was a loving woman and he had one sister, Elizabeth.
Since his childhood, he had wanted to be a poet. Luckily, his parents encouraged him a lot from an early age to develop his creative gifts. He had a pleasant childhood, as he was fully loved and supported by his parents, especially his mother.
He studied in Harvard University from where he earned both a BA and an MA by 1916. After that, he went to serve in the World War I overseas as a volunteer for ambulance corps.
While serving in the ambulance corps, the letters Cummings was sending home caught the attention of the military censors since he had publicly expressed his anti-war views. This led to him and his friend being kept in a French detention camp for three months. He later wrote about his experiences, as well as criticisms of authoritarianism which was published as ‘The Enormous Room’, an autobiographical novel. 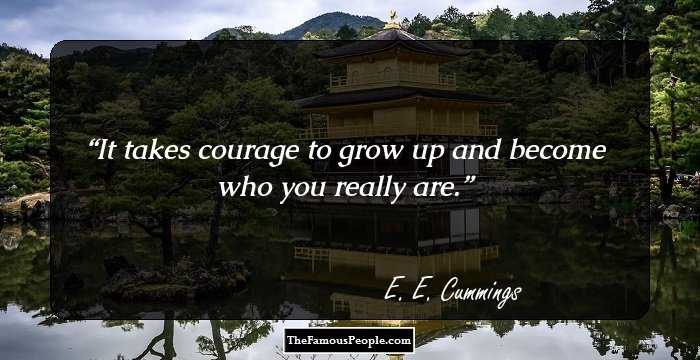 Quotes: You
Continue Reading Below
Career
His first public poems appeared in an anthology named ‘Eight Harvard Poets’ in 1917. In 1920, seven of his poems were published in ‘The Dial’ which served as his debut to a wider audience in America. *In 1921, he returned to Paris to study art, after which he went back to New York. It was then when he gained fame, both for ‘The Enormous Room’ (1922) and ‘Tulips and Chimneys’ (1923).
The original manuscript of ‘Tulips and Chimneys’ was actually cut down by his publisher, though the deleted poems were published in 1925. The same year Cummings was also chosen by ‘The Dial’ magazine for their annual award of $2,000, a sum which equaled a full year’s income for him.
He became known mainly for his unconventional poems that played with form, spacing, punctuation, grammar and even pacing. But he was also able to write traditional style verse such as sonnets with a flair for wit and whimsy.
He travelled between New York and Paris several times and also travelled throughout Europe. He travelled to the Soviet Union where he was quite horrified at the ways of the government, its social policies, etc. In his unconventional prose work ‘EIMI’, published in 1933 he wrote in depth about it. He vehemently criticized the Soviet Union, and described it as a “unicircus of noncreatures.”
In the 1930s he used to endlessly repeat himself by writing different versions of the same poem, as he felt separated from his culture and fellow poets. The most characteristic device he is remembered for is the unique, personal grammar as well as the breaking up and putting back together of words into different forms.
His greatest achievements were his love poems and religious poems. Some of the best works regarding sexual love and the religious experiences of awe in the twentieth century were written by him. It is to be remembered that such poems were hardly popular at that time. So, Cummings can also be credited for popularizing this particular style.
His critical reputation could neither touch nor affect his popularity. His works were dismissed as sentimental, as well as politically naïve by some, especially the left wing critics. However, his work was appreciated by many, not only for his verbal and visual creativity, but also for the mystical and anarchistic beliefs that they could read.
His critics often commented on his failure to grow as a writer over the years and questioned his intellectual contributions to literature. On the other hand, his supporters were of the belief that his works deserve much acclaim, and even credited him for giving ‘life to language’.
Cummings used to struggle financially and self published most of his works initially. But later in the 1940s and 1950s, his writing style became much more popular and accepted, and he started receiving much recognition. He received a fellowship as well from the Academy of American poets. Harvard University also awarded him an honorary seat as a guest professor.
Continue Reading Below 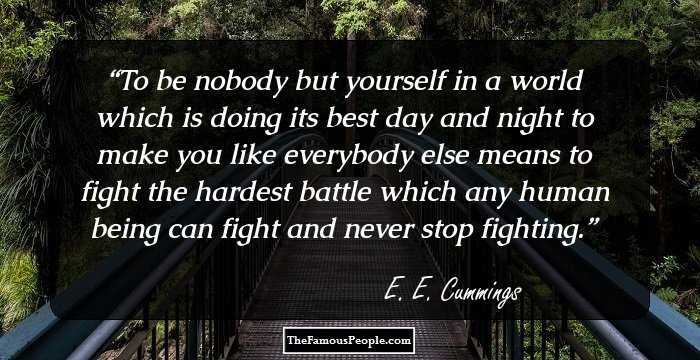 Quotes: You, Never, Yourself, Like
Major Works
One of his most important works of poetry is ‘Tulips and Chimneys’ which was published in 1923. It became wildly popular for his unconventional forms of expression.
Inspired by his daughter, his most successful play was ‘Santa Claus: A morality’ It was first published in the ‘Wake’, a Harvard College Magazine.
His work ‘EIMI’ published in 1933 is well known for his vehement criticism of the Soviet Union, where he had spent six weeks. This work, which can be considered one of his best achievements, shows wildly his disappointment and hostility to the communist world.
His ’95 Poems’ which was published in 1958, included verses about a number of ordinary individuals, whom Cummings honored. It also recorded his negative views of the Hungarian revolution, as well as memories of his childhood time.
Awards and Achievements
He won the Shelley Memorial Award, Harriet Monroe Prize and Bollingen Prize for Poetry in 1944, 1950 and 1958 respectively.
He won Fellowship of American Academy of Poets as well as Guggenheim Fellowship in 1950 and 1951 respectively.
He received Boston Arts Festival Award in 1957. 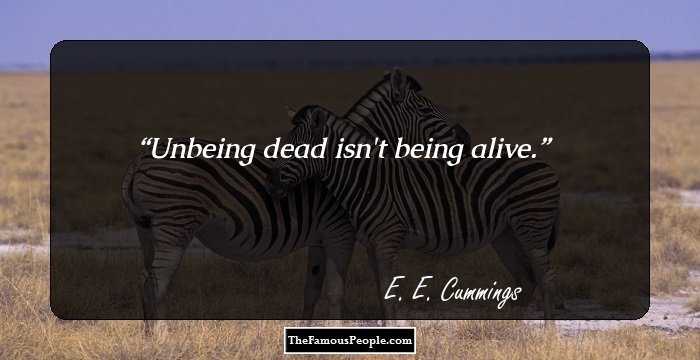 Personal Life and Legacy
Cummings’ had a car accident in 1926, which killed his father and injured his mother severely. His father’s death had a profound effect on him which led to him entering an entirely new period in his artistic life. He paid homage to his father in his poem ‘My father moved through dooms of love’.
He had two marriages, first one to Elaine Orr and second one to Anne Minnerly Barton. He had a daughter with his first wife out of wedlock. After separation from his second wife, Cummings met a fashion model and photographer Marion Morehouse. Even though the two lived together till he breathed his last, it is not clear whether the two were ever formally married.
He died of a stroke on 3 September 1962, at the age of 67.
Trivia
He started writing poetry at the age of just eight. While he was a student at Harvard, he further developed his skills.
Cummings used to hold conservative political views, a fact which seemed strange to many, because of his radical anarchistic literary persona.
He was influenced by the poetry of Amy Lowell.

See the events in life of E. E. Cummings in Chronological Order