Édouard Manet was a renowned French painter. Born in an affluent family of diplomats and magistrates, he grew up to be the most controversial painter of his time. His father wanted him to build a career in law but Manet devoted himself to his passion for art. He was one of the key figures in the transition of art from ‘Realism to Impressionism’. His important works like ‘Olympia’ and ‘The Luncheon on the Grass’ caused great controversy. While traveling across Germany, Netherlands and Italy; he was influenced by the styles of Spanish and Dutch artists. Although Manet had been influenced by the impressionist Style, he favored exhibiting arts in the Paris Salon rather than at independent exhibitions. After being rejected from the International Exhibition of 1867, he opened his own exhibition where he got his first contacts with future impressionist painters, like Degas. All his life, Edouard Manet was opposed by art critics and was even challenged in the press, but he continued to paint what he saw rather than what people wanted to see in his paintings Almeida Junior
Realist Painters #2
Artists & Painters #30
DID WE MISS SOMEONE?
CLICK HERE AND TELL US
WE'LL MAKE SURE
THEY'RE HERE A.S.A.P
Quick Facts

Diseases & Disabilities: Amputation Of One Of His Legs., Rheumatism, Syphilis

French People
French Men
French Artists & Painters
Male Artists & Painters
French Realist Painters
Childhood & Early Life
Edward Manet was born on 23 January, 1832, in Paris at their ancestral mansion in an affluent family. His mother was Eugenie-Desiree Fournier, the daughter of Charles Bernadotte, the Swedish crown prince while his father, Auguste Manet was a judge and wanted his son to study law.
He was encouraged by his uncle Edmond Fournier to pursue painting and so was taken to the Louvre. In 1945, Manet enrolled in a painting course at his uncle’s advice where he came to know Antonin Proust, who became the future minister of Fine Arts and later on they both became lifelong friends.
To fulfill his father’s wish, Manet embarked on a training vessel in the year 1848 to join the Navy in Rio de Janeiro. After failing twice in the entrance examination, his father eventually agreed to his dream of pursuing art education.
Between the years 1850 and 1856, Edouard Manet studied painting under the supervision of Thomas Couture. During his spare time, Manet loved admiring the paintings in Louvre and copying arts of old masters.
He travelled to Netherlands, Italy and Germany from 1853 to 1856, during which he learned painting from Spanish artistes like Francisco Jose de Goya and Diego Velazquez and Dutch painter Frans Hals. His travel experiences influenced his various styles and art forms. He derived inspirations from illustrious personalities like Goya, Caravaggio, Diego Velazquez and Titian. 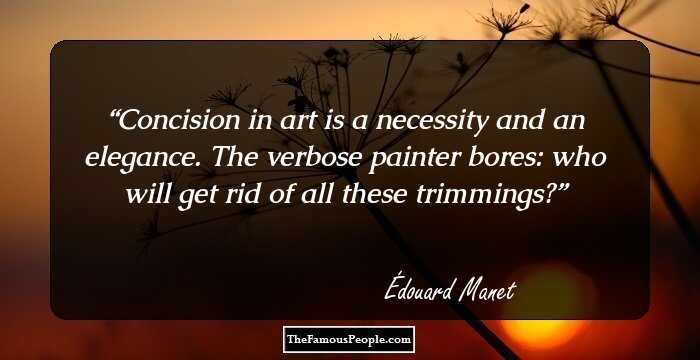 Famous Beautiful Women With Green Eyes
Career
After travelling to places, spending valuable time in Louvre and learning from the masters, Edouard Manet developed his own style of painting focused on ‘realism’. In the year 1856, he opened his own studio and worked on ‘realism’and contemporary subjects. Gustave Courbet inspired his early works that emphasized realism and Manet depicted everyday life situations, such as, singers, people in pavement cafes, bullfights and Gypsies through his career.
Later in his career, he moved on to creating artworks rather than simply focusing on themes. Two of his paintings the ‘Christ with Angels’ and ‘Christ Mocked’ brought him fame.
In 1861, Edouard Manet’s two paintings - a portrait of his mother and father (who were robbed of speech and paralyzed) and the other ‘The Spanish Singer’ won admiration from art lovers.
In the 1860s, Manet was criticized by many critics for his ‘Luncheon on the Grass’ where a woman is shown in nude whereas two men are presented in full dress. Many were shocked at the odd ways of its depiction so the painting was rejected by the Paris salon. Yet again, the painting, ‘Olympia’ that showed a self-assured prostitute raged scandals at the Paris Salon.
His photographic lighting and roughly painted style was modern and posed challenge to renaissance works. Although his arts anticipated and influenced the impressionist style, he abstained from impressionist exhibitions, since he favoured salon exhibitions.
At the dusk of his career, he did not fail to impress with his ‘A Bar at the Folies-Bergere’ in 1882. 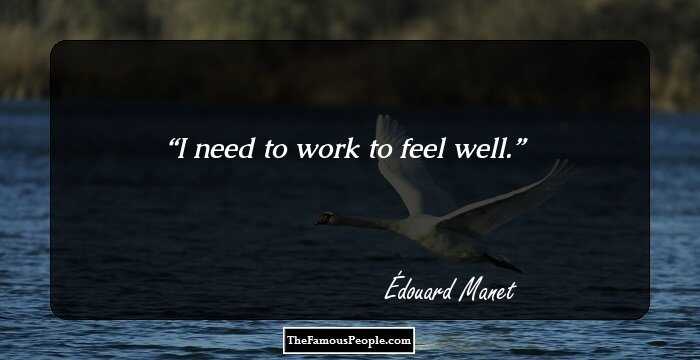 Major Works
One of his early works is ‘Luncheon on the Grass’ that drew huge uproar from critics.
‘Olympia’ is among his controversial works that is reminiscent of The Nude Maja, a Francisco Goya painting.
Continue Reading Below
His ‘The Spanish Singer’ received admiration from the famous Theophile Gautier and surprised many painters.
‘Music in the Tuileries’ is one of his other major works, which is considered to be incomplete.
’A Bar at the Folies-Bergere’, his last work was hung in the Salon in 1882.
Awards & Achievements
In 1875, Edgar Allan Poe included lithographs by Edouard Manet in his French edition, The Raven, alongside translation by Mallarme.
In the year 1881, Edouard Manet was awarded the Legion d’honneur by the French government after his friend Antonin Proust put pressure on the government. 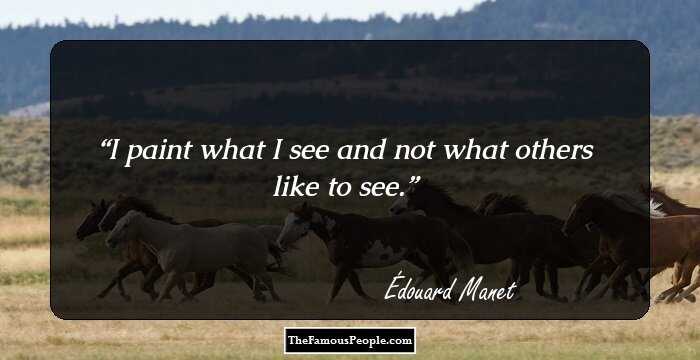 Personal Life & Legacy
Edouard Manet married Suzanne Leenhoff in 1863, supposedly a mistress of his father. Leon Koella Leenhoff (born to Suzanne) could have been son of either of the Manets.
Manet had contracted syphills and suffered from rheumatism, for which he received no treatment.
In April 1883, Manet’s left foot was amputated due to gangrene, and he died just eleven days later on April 30, 1883. He is buried in the Passy Cemetery in Paris.
He was one of the first radical thinkers and was responsible for shift from realism to impressionism.
He offered new meanings to the paintings he drew through black and bold outlines.
He is known for painting controversial subjects. One of his paintings was sold in 2000 for over $20 million.
Trivia
This great painter was charmed by leisurely activities as depicted in Music in the Tulleries.
You May Like

Quotes By Édouard Manet | Quote Of The Day | Top 100 Quotes

See the events in life of Édouard Manet in Chronological Order