Advanced Search
Dmitri Mendeleev was a Russian chemist who greatly impacted the scientific community with his discovery of the periodic law and by successfully organizing the elements into the periodic table. His early life was marked by struggle and tragedy. By the time he was 21, he had lost his father and was suffering from tuberculosis. He buried himself in his scientific studies and went on to become a science professor. As a teacher, he realized that there was no comprehensive and complete textbook for his students. To correct this, he set out to publish a textbook that would provide a better learning experience for Russian students. He utilized his strong academic background, international scientific research and innovative theories to publish over 400 articles and books over his lifetime. Mendeleev, though best known for the periodic table, was also strongly interested in developing and improving Russia’s agricultural and industrial resources. He served as an advisor to the government, and he wrote several projects to develop the coal industry. He traveled throughout the Russian empire and even went to the United States to learn about petroleum. Near the end of his lifetime, he retired from teaching and turned his focus to metrology. In only a few short years, he published his own journal of metrology. His dedication to various disciplines is overshadowed by his enormous scientific discovery of the periodic table of elements Dan Shechtman
DID WE MISS SOMEONE?
CLICK HERE AND TELL US
WE'LL MAKE SURE
THEY'RE HERE A.S.A.P
Quick Facts

Russian Celebrities
Russian Men
Male Chemists
Male Scientists
Russian Chemists
Childhood & Early Life
Dmitri Mendeleev was born on February 8, 1834, in Verkhnie, Aremzyani, a small Russian province. The exact number is unknown, but it is believed that he had at least 16 brothers and sisters.
His childhood was marked by tragedy when his father, Ivan Mendeleyev, began having health problems. He passed away in 1847 leaving Dmitri’s mother to work at a glass factory to support the family.
Tragedy struck again in 1848 when the glass factory his mother managed burned down. The family was forced to move to St. Petersburg.
In 1855 Mendeleev was diagnosed with tuberculosis, but he continued to pursue his education to become a teacher. He graduated from the Main Pedagogical Institute in St. Petersburg. 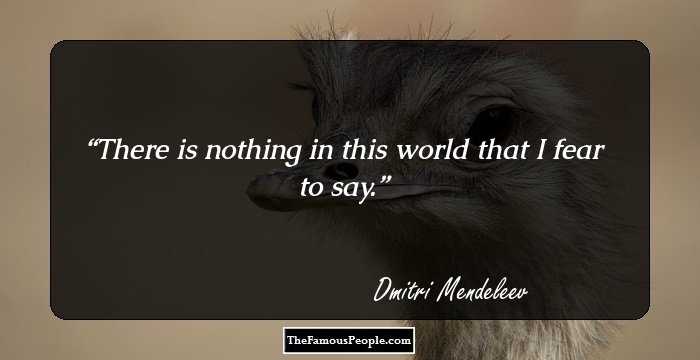 Quotes: Fear, I
Continue Reading Below
Career
In 1855, Mendeleev became a science teacher in Crimea. He soon decided to move back to St. Petersburg and continue his education. A year later he completed his Masters degree in Chemistry.
He became a professor at the University of St. Petersburg. He realized the great need for an organized and quality chemistry textbook, so he began to research and work on one of his own.
In 1861, he released ‘Organic Chemistry’, a 500 page textbook. The book went on to win the Domidov Prize and push Mendeleev to fame in the scientific community.
In 1867, he was honored with the Chair of General Chemistry at the University of Saint Petersburg. He used his position to push Russia to improve and focus on their understanding of chemistry.
In 1869, Mendeleev came out another major book, ‘The Principles of Chemistry’. The book became so popular that it was translated to French, German, and English.
In 1869, he published his major work ‘The Relation between the Properties and Atomic Weights of Elements’. He organized the 65 known elements into the periodic table.
By 1889 Mendeleev had perfected his periodic table of elements. He presented his representation in London, and it is this model that is still used today.
In 1890, he retired from his university position. The same year, he took a position as a government consultant. He was strongly interested in developing Russia’s industrial and agricultural resources.
He was particularly interested in petroleum. His research helped to found Russia’s first oil refinery.
Continue Reading Below
In 1893, he became director of the Central Board of Weights and Measures in Russia. He published several articles in the ‘Brockhaus Encyclopedia’ and reviewed numerous reprints of his “Principles of Chemistry”.
Major Works
Mendeleev released the periodic table in 1869. His revolutionary organization of the elements correctly assumed that some of the elements had their atomic weights measured incorrectly and that eight new elements existed. As new elements were found and his theories were further proven correct, his scientific reputation was enhanced even more.
Awards & Achievements
He was awarded with the Copley Medal in 1905. This British Royal Society gave him this highest honor for his famous scientific discovery, the periodic table.
Personal Life & Legacy
Mendeleev married Feozna Nikitchna Lascheva on 27 April 1862. The marriage lasted for nearly 20 years before the couple divorced in 1882. He had two children from this marriage: son Vladimir and daughter Olga.
In 1882 Mendeleev married Anna Ivanova Popova and this union resulted in four children.
He passed away on February 2, 1907. His funeral was in St. Petersburg and many people brought along copies of the Periodic Table as tribute to his contributions to science.
Element number 101 was discovered in 1955. It was named Mendelevium to honor his contributions to science.
Trivia
In 1855 Mendeleev fell ill with tuberculosis. Doctors believed he had only two years to live, but he went on to live for 52 more years.
He wrote his textbook, ‘Organic Chemistry’, in only 61 days. The book is 500 pages and went on to win the Domidov Prize.
Nearly all of Mendeleev’s biographies detail his scientific findings. The truth is, however, he spent more time and pondered more on questions regarding the national economy rather than chemistry.
There is a popular Russian myth that it was Mendeleev who set the 40% standard strength of vodka. The truth is the government already had these standards when he was only nine years old.
In 1906, Nobel Committee for Chemistry recommended Mendeleev's name to the Swedish Academy for the Nobel Prize in Chemistry. However, Svante Arrhenius, who had a great deal of influence on Swedish Academy, pressured the Academy to reject Mendeleev's name. Arrhenius nursed a personal grudge against Mendeleev because of Mendeleev's critique of Arrhenius's dissociation theory.
Recommended Lists:
Inventors & Discoverers #31

See the events in life of Dmitri Mendeleev in Chronological Order