Since generations, people have always complained of not finding the perfect pizza or the spot-on spaghetti while trying different restaurants and fast food joints but has anyone looked beyond complaining? One did and became the owner of the third most popular burger restaurant in US, Wendy’s. In an attempt to revive the status of hamburgers in Columbus, Dave Thomas unknowingly re-wrote history in the world of fast food and created a legacy that lasted through ages. It was his inability to find a good hamburger in Columbus that inspired him to take in charge and start with his own enterprise that sold authentic and scrumptious hamburgers. Backing on the years of expertise in restaurant business which he gained from working at Hobby House Restaurant and his successful attempt at reviving the KFC brand, Thomas took a step ahead in his career and founded Wendy's, a fast-food restaurant chain specializing in hamburgers. He served as the chief executive officer of the company which within a couple of years witnessed a growth manifold, expanding from a single enterprise to a huge burger franchise with a chain of 6000 outlets. Apart from being the initiator of Wendy’s, Thomas was also responsible for being the face of the brand, as he appeared in about 800 commercials from 1989 until 2002. To know more about his life and profile, read on.
Continue Reading Below American Celebrities
Philanthropists
American Men
American CEOs
Cancer Entrepreneurs
Childhood & Early Life
Dave Thomas was born to a single woman in Atlantic City, New Jersey, who later gave him up for adoption. When he was six weeks of age, he was adopted by Rex and Auleva Thomas.
Young Thomas’s adoptive mother expired when he was five years old. He was then raised up by his grandmother Minnie Sinclair in Michigan, while his father sought for work. It was his grandmother who inculcated in him the values of respect and reverence. 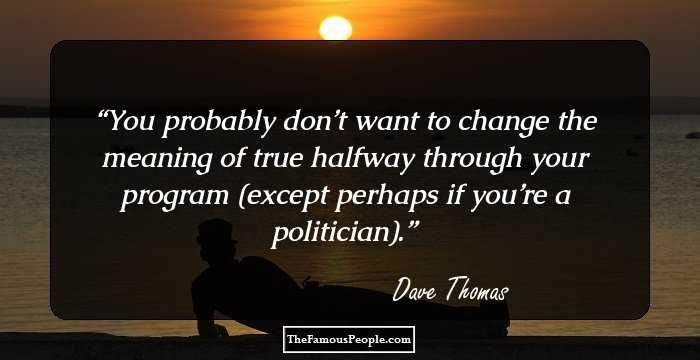 Quotes: You, Change
Continue Reading Below
You May Like

Famous Beautiful Women With Green Eyes
Career
He took to working at the age of 12 in a restaurant in Knoxville, Tennessee, The Regas. However, the job did not last long as he had a spat with his boss. Vowing never to lose a job again, he moved with his dad and took up various odd jobs, as a paperboy, golf caddy and at soda fountain counter in drugstore.
When he was 15, he started working part time at the Hobby House Restaurant owned by the Clauss family in Fort Wayne, Indiana. Meanwhile, he attained his formal education from a local high school.
When his family relocated from Fort Wayne, instead of choosing to go with them, he stayed back and switched to working full-time at the restaurant, dropping out from high school during his 10th grade.
In 1950, at the outbreak of the Korean War, he volunteered himself for the US Army. Since he already had a couple of years of experience in food production and service, he chose to serve in the same.
He was sent to Germany wherein he took up the post of a mess sergeant. He was responsible for the daily meals of 2000 soldiers. Within a span of time, he was upgraded to the rank of staff sergeant. In 1953, he was relieved of his services.
Returning to Fort Wayne, he resumed his duties at Hobby House. Meanwhile, Colonel Harland Sanders, founder of Kentucky Fried Chicken, arrived at Fort Wayne to sell KFC franchises to established businesses.
Reluctantly, Clauss’s family accepted the offer, which allowed Sanders to work with Thomas, who was then promoted to the rank of head cook at Hobby House Restaurant.
His association with Sanders proved to be a prized opportunity for the former as he learned, developed and polished his business acumen during this time. His suggestions were promptly accepted by Sanders who looked up to revive the KFC brand and increase its sales.
During the mid-1960s, he moved to Columbus, Ohio, to revive the future of four KFC stores that the Clauss family owned, each of which was working on deficit balance.
Continue Reading Below
Interestingly, within a matter of years, he changed the fate of the restaurants turning them into profitable ventures so much so that in 1968, he sold his shares back to Sanders for more than $1.5 million.
Perpetually complaining about the inability to find good hamburgers in Columbus, Ohio, he sought to make a foray into producing hamburgers himself. Accompanied by his business skills and experience gained from reviving the KFC brand, he moved ahead and started his own business.
He inaugurated his first restaurant, Wendy in November 15, 1969. The restaurant was named after his eight year old daughter Melinda Lou who was nicknamed Wendy.
Wendy’s soon caught the craze in the food-loving people of the city, who loved its offering, for its unique shape and choice of toppings. The rising demand and abundant popularity led to Wendy’s becoming the top food joint in the city.
The single restaurant which he had opened soon multiplied itself and in less than a decade, transformed into a more than 1000-outlet franchise. Wendy’s had become a popular hamburger chain in and outside the country.
In 1982, he resigned from his day to day operational duties only to resume the responsibilities three years later in 1985. During the period of hiatus, the company suffered from major setbacks, given deficient balance sheets, losing brand popularity, an unaccepted breakfast menu and dipping sales.
A call from the company’s President led him to go back in action for Wendy. He took up an active role and visited each of the franchises, motivating and uplifting the morale of the employees to work harder to revamp the image of the brand.
In 1989, he took on the hat of a television spokesman, promoting Wendy in a series of commercials. Though the commercials failed to impress the audience initially due to his lack of acting skills, a change in the write-up led to the desired effect and the popularity of Wendy’s soon caught in the market.
By the 1990s, he soon became the face of the brand and a household name. With more than 800 commercials, he steered Wendy’s popularity to make it the country's third most popular burger restaurant, after McDonalds and Burger King. The company had about 6000 franchises.
Continue Reading Below
Interestingly, he resumed his studies in 1993, considering his dropping out of high school his biggest mistake and a bad example for teenagers. He enrolled at Coconut Creek High School and was awarded a GED the same year.
Awards & Achievements
He was a Freemason at Sol. D. Bayless Lodge No. 359 Fort Wayne, Indiana, and a member of the Shriners. In 1995, he was conferred with the honorary 33rd degree.
In 1999, he was inducted into the Junior Achievement U.S. Business Hall of Fame.
Additionally, he was also an honorary Kentucky colonel
Personal Life & Legacy
He tied the nuptial knot with Lorraine in 1956. The couple was blessed with five children, the youngest of whom was Melinda Lou, nicknamed Wendy on whom he later named the chain of restaurants.
An adoptive child himself, he founded the Dave Thomas Foundation for Adoption, which made some ground-breaking initiatives, providing benefits for people who adopted children. It was due to his increasing popularity that he was appointed as a national spokesman on adoptive issues by President George Bush.
He underwent a quadruple bypass surgery in December 1996. Though he resumed his active role as brand promoter, in the early months of 2001, he began receiving kidney dialysis.
On January 8, 2002, he breathed his last at his home in Fort Lauderdale, Florida due to liver cancer. He was interred in Union Cemetery in Columbus, Ohio
Posthumously, in 2003, he was awarded with the Presidential Medal of Freedom.
Recommended Lists:
Business People #452
Miscellaneous #891
You May Like

See the events in life of Dave Thomas in Chronological Order