Advanced Search
Robert Edwin Peary was an American explorer who claimed to have first reached the geographic North Pole in 1909. He is one of the highly acclaimed dog team and sledge polar explorers to make considerable efforts for understanding the Inuit culture and Artic circle. Early on in his career, the desire to go on long expeditions always triggered his explorations. The adverse weather conditions and several health issues did not deter him and his strong will to reach the North Pole kept him going. Despite facing credibility issues, he has been widely acclaimed and appreciated for his discovery of the world’s three largest meteorites. He was honored with numerous awards and accolades but his North Pole expedition of 1909 is still disputed. American Celebrities
Bowdoin College
American Explorers
Taurus Men
Childhood & Early life
Robert Peary was born on May 6, 1856 in Cresson, Pennsylvania, to Charles N. and Mary P. Peary.
Post his father’s death in 1859, Robert and his family shifted base to Portland, Maine, where he worked as a county surveyor.
He enrolled for civil engineering from Bowdoin College in 1873 from which he graduated in 1877.
Robert Peary also served the US Coast and Geodetic Survey in Washington, DC as a draftsman making technical drawings.
While still very young, he aspired to make long expeditions for which his preparations began quite timely in the form of 25-miles hikes he made every week. His intellect helped him clear the examinations of the U.S. Navy too.
He started by joining the U.S. Navy Civil Engineer’s Corps in 1881 as a civil engineer (relatively ranked as lieutenant) and went on to build his career in the field of exploration. 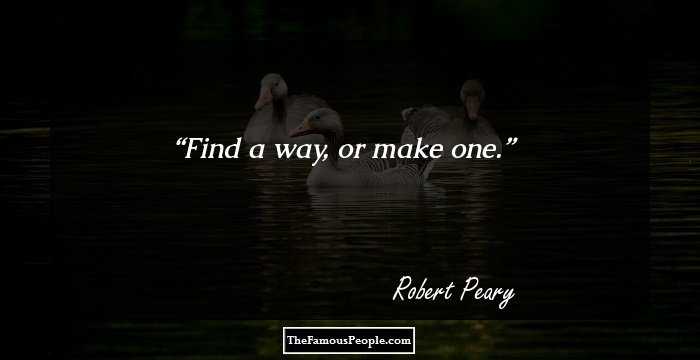 Continue Reading Below
Career
Robert Peary’s career began in 1884 as a chief assistant on an expedition to Nicaragua during which he worked on surveying a ship canal. It was during this period only that his inclination towards North Pole exploration increased.
In 1886, he tried to manage a short inspectional trip to the Disco Bay of Greenland with three companions and reached 2288 meters above sea level but had to return back due to shortage of food and resumed his duties in Nicaragua.
In a 1886 paper that he wrote for the National Academy of Sciences, he mentioned about two ways for crossing the Greenland’s ice cap.
Mathew Henson, an African-American explorer worked as an assistant to Peary on his various expeditions.
The led his second expedition to Greenland in 1891, this time taking a more adverse track in order to know if Greenland extended till the North Pole. This expedition was undertaken with seven companions including his wife and was financed by American Geographic Society, the Philadelphia Academy of Natural Sciences, and the Brooklyn Institute of Arts and Sciences
After sledging 2100km, the expedition succeeded in acknowledging Greenland as an island.
It was during his appointment along the Eastern seaboard as a naval engineer from 1888 to 1891 that his preparations for the North Pole expedition gained momentum.
Robert made his first attempt for the North Pole expedition in 1898. He prepared for the expedition by studying the lifestyle of Inuits, building igloos and dog sledge operation. This journey was tough due to adverse weather conditions which froze his eight toes leading to amputation of all toes to ease walking.
Further expeditions to higher latitudes required a ship and huge funds which Peary arranged by delivering lectures at various places.
Continue Reading Below
During the 1898 -1902 expedition, he was credited for discovering the Cape Jesup, the northernmost tip of Greenland. This expedition was undertaken in a ship, the Roosevelt.
Peary’s third and final attempt for reaching the North Pole was made in 1908. He went on this expedition along with five other people and attained success on April 6, 1909.
To Peary’s dismay, his old colleague Cook claimed to have touched the North Pole a year ago in April 1908.
Some of his experiences are published in the form of Northward over the “Great Ice” (1898), The North Pole (1910), and Secrets of Polar Travel (1917).
Peary became Naval Captain in 1910, following which he was given the Thanks of Congress in 1911 through a special act.
On March 3, 1911, he retired as the Rear Admiral of the Naval Civil Engineer (promoted by the special act of the Congress).
Awards & Achievements
Post retirement, Peary won many accolades from various scientific societies in Europe and America for his expedition to the North Pole.
After being elected as the President of the Explorers Club two times (1909 to 1911 and 1913 to 1916), he was elected the chairman of the National Aerial Coast Patrol Commission, a private set up that proposed aircrafts for detecting warships and submarines along the U.S. Coast.
The origin of Naval Reserve during the First World War and the U.S. Postal Service’s air mail system based on the air mail routes are also credited to Peary.
Continue Reading Below
Robert’s expedition to the North Pole got him a Congressional medal in 1944.
He was honored by various other medals like Cullum Geographical Medal (1896), Charles P. Daly Medal (1902) by the American Geographical Society; the Hubbard Medal by the National Geographic Medal in 1906; the special great gold medal by Royal Geographical Society of London and National Geographic Society of Washington; Helen Culver medal by the Chicago Geographical Society, and many more.
Peary received honorary degree of doctor of laws from both Bowdoin College and the Edinburgh University along with the Honorary Memberships of New York Chamber of Commerce, Pennsylvania Society, Manchester Geographical Society and Royal Netherlands Geographical Society of Amsterdam.
He was awarded the Grand Officer of the Legion of Honor in 1913.
A 22 cent postage stamp was issued by the United States Postal Service in Robert Peary’s honor.
Personal Life & Legacy
Robert Peary got married on August 11, 1888 to Josephine Diebitsch, a business school pass out. Being professionally active since the age of 19, she was a woman with a modern outlook. The couple was blessed by two children, Marie Ahnighito and Robert Peary, Jr.
Due to work engagement, Peary could only afford to spend three years out of the first twenty three years of marriage with his family. He could not share the joys and sorrows of the family especially his son’s birth and his early death.
Peary was criticized for bringing six Inuits to the United States from his 1897 expedition and their subsequent ill-treatment. These Inuits were handed over to be displayed at the American Museum of Natural History in New York where five eventually died.
Peary is said to have had a relationship with Aleqasina, an Inuit women during the Artic expeditions, with whom he had two children.
In late 1911, he moved to a house in Harpswell, Eagle Island, on the Maine coast which went on to become a place of historic importance as Maine State Historic Site.
Robert Peary passed away on February 20, 1920 in Washington, D.C. at the age of 63.
He was cremated in Arlington National Cemetery, where the Admiral Robert Edwin Peary monument was inaugurated on April 6, 1922 by his daughter in the presence President Harding and Former Secretary of the Navy, Edwin Denby.
Trivia
The life of Robert Peary has been depicted in Glory & Honor, a TV movie which won the Primetime Emmy.
His claim to have reached the North Pole has been a subject of debate. According to some historians, Peary honestly thought he had reached the pole while others say that he deliberately exaggerated his accomplishments.

See the events in life of Robert Peary in Chronological Order