Daniel Bernoulli was a Swiss mathematician and physicist who did pioneering work in the field of fluid dynamics and kinetic theory of gases. He investigated not only mathematics and physics but also achieved considerable success in exploring other fields such as medicine, physiology, mechanics, astronomy, and oceanography. Born in a distinguished family of mathematicians, he was encouraged by his father to pursue a business career. After obtaining his Master of Arts degree, he studied medicine and was also privately tutored in mathematics by his father. Subsequently, he made a name for himself and was called to St. Petersburg, where he spent several fruitful years teaching mathematics. During this time, he wrote important texts on the theory of mechanics, including a first version of his famous treatise on hydrodynamics. Later, he served as a professor of anatomy and botany in Basel before being appointed to the chair of physics. There he taught physics for the next 26 years and also produced several other excellent scientific works during his term. In one of his most remarkable works ‘Hydrodynamica’ which was a milestone in the theory of the flowing behavior of liquids, he developed the theory of watermills, windmills, water pumps and water propellers. But, undoubtedly, his most significant contribution to sciences would be the ‘Bernoulli Theorem’ which still remains the general principle of hydrodynamics and aerodynamics, and forms the basis of modern aviation Swiss People
Swiss Men
Male Scientists
Male Physicists
Swiss Physicists
Childhood & Early Life
Daniel Bernoulli was born on February 8, 1700, in Groningen, Netherlands, to Johann Bernoulli, a mathematician who was one of the early developers of calculus. He had two brothers, Nicolaus Bernoulli II and Johann Bernoulli II.
He belonged to a family of distinguished mathematicians who later immigrated to Basel, Switzerland.
He wanted to become a mathematician but his father encouraged him to pursue a business career. At the age of 13, his father sent him to Basel University to study philosophy and logic. In 1715, he completed his graduation and a year later obtained his Master’s degree.
After that, upon his father’s wishes, he agreed to study medicine on the condition that his father would teach him mathematics privately. Daniel studied medicine in Basel, Heidelberg, and Strasbourg, and earned a doctorate in anatomy and botany in 1721. 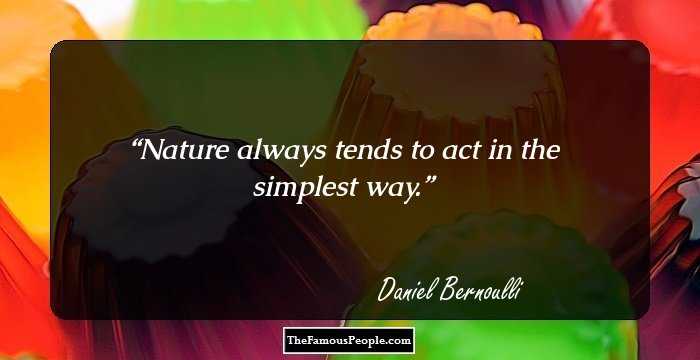 Famous Beautiful Women With Green Eyes
Career
In 1723-24, he published one of his earliest mathematical works titled ‘Exercitationes quaedam Mathematicae’ (Mathematical Exercises). It focused on differential equations and the physics of flowing water.
In 1724, he was appointed the professor of mathematics at St. Petersburg academy of sciences, a post he served in for eight years. In 1733, after a temporary illness, he resigned from his post and returned to Basel.
In 1732, he became a professor of botany and anatomy at the University of Basel and later, accepted a post in physiology in 1743.
In 1738, he discussed the basis of the kinetic theory of gases in his work ‘Hydrodynamica’, which dealt with the properties of basic importance in fluid flow, particularly pressure, density, and velocity, and emphasized on their fundamental relationship.
Subsequently, he came out with his most important work called ‘Bernoulli’s principle’, which states that the pressure in a fluid decreases as its velocity increases.In 1750, after being appointed to the chair of physics at the University; he served as the professor of physics for the next 26 years.
He also published numerous papers dealing with mechanics which mainly focused on the problems connected with vibrating strings. He worked with Euler on elasticity as well as on the development of the Euler-Bernoulli beam equation.
He also authored the ‘Specimen theoriae novae de mensura sortis (Exposition of a New Theory on the Measurement of Risk)’ which is the basis of economic theory of risk aversion, risk premium and utility.
His later works comprised of statistics and probability. His last work involved the application of probability theory to various practical matters, such as inoculation and relative proportion of male and female births. 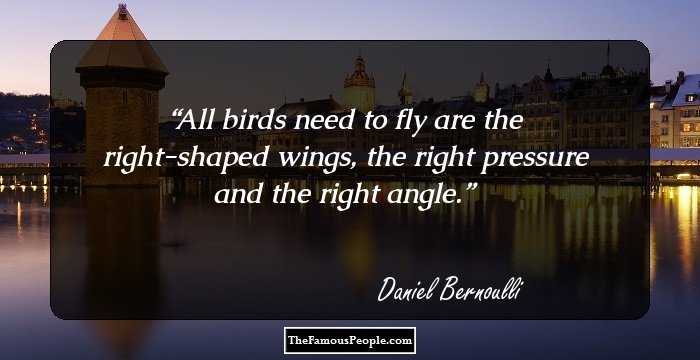 Quotes: Need
Major Works
His most remarkable work was the ‘Bernoulli’s theorem’, related to the field of hydrodynamics. It states, in effect, that the total mechanical energy of the flowing fluid, comprising the energy associated with fluid pressure, the gravitational potential energy of elevation, and the kinetic energy of fluid motion, remains constant. The theorem still forms the basis of many engineering applications, such as aircraft wing design.
He also established the basis for the kinetic theory of gases and heat by demonstrating that the impact of molecules on a surface would explain pressure and that, assuming the constant, random motion of molecules, pressure and motion increase with temperature.
Awards & Achievements
Between 1725 and 1749, he received 10 prizes from the Paris Academy of Sciences for his contributions in the field of astronomy, gravity, tides, magnetism, ocean currents, and the behavior of ships at sea.
In May 1750, he was elected a Fellow of the Royal Society.
Personal Life & Legacy
In 1735, he, along with his father, was jointly awarded by the University of Paris for their work on planetary orbits. But his father, who thought of himself as much superior to his son, threw Daniel out of the house for being treated as equal to him.
He died on March 17, 1782, in Basel, Switzerland.
You May Like

See the events in life of Daniel Bernoulli in Chronological Order