(King of the United Kingdom)

Charles III is King of the United Kingdom and 14 other Commonwealth realms. He became the king on 8 September 2022 upon the death of his mother, Queen Elizabeth II. Charles became the heir apparent in 1952 when his grandfather King George VI died and Elizabeth ascended the throne. Being Queen Elizabeth’s oldest son, Charles became the heir apparent to the British throne and received the title ‘Duke of Cornwall.’ He was created Prince of Wales and Earl of Chester in 1958, making him the first Prince of Wales since 1936. As a student, Charles was good at academics and studied archaeology, anthropology, and history at ‘Trinity College,’ which is a part of the ‘University of Cambridge.’ Along with his studies, he also participated in various other activities and was known to be a smart young man. He embarked on a military career post his graduation and served as a helicopter pilot and even commanded a ship during his service years. Charles founded ‘The Prince's Trust’ in 1976, sponsors ‘The Prince's Charities,’ and is a patron, president, and member of over 400 other charities and organizations. As a public figure, King Charles III's personal life has often been under scrutiny. His troubled marriage to Diana and his extra-marital affairs have often made it to the tabloids. Prince William
DID WE MISS SOMEONE?
CLICK HERE AND TELL US
WE'LL MAKE SURE
THEY'RE HERE A.S.A.P
Quick Facts

King George VI died in 1952 and his daughter Princess Elizabeth became the queen. Prince Charles, aged three, became the heir apparent to the throne. His new status made him the Duke of Cornwall and he was also automatically given the Scottish titles ‘Duke of Rothesay,’ ‘Earl of Carrick,’ ‘Baron of Renfrew,’ ‘Lord of the Isles,’ and ‘Prince and Great Steward of Scotland.’

He started attending ‘Hill House School’ in West London in 1956, before moving to boarding school at the ‘Cheam School’ the following year. Charles then attended ‘Cheam Preparatory School’ in Berkshire, England. He changed schools again in 1962 and went to ‘Gordonstoun’ in Scotland. In 1966, he spent two terms at the ‘Timbertop’ campus of ‘Geelong Grammar School’ in Victoria, Australia.

He enrolled at the ‘Trinity College,’ Cambridge, to study anthropology, archaeology, and history in 1967. He attended the ‘University College of Wales’ in Aberystwyth for a while during his second year.

Prince Charles became the first heir apparent to earn a university degree when he graduated from ‘Cambridge’ with a Bachelor of Arts in 1970. 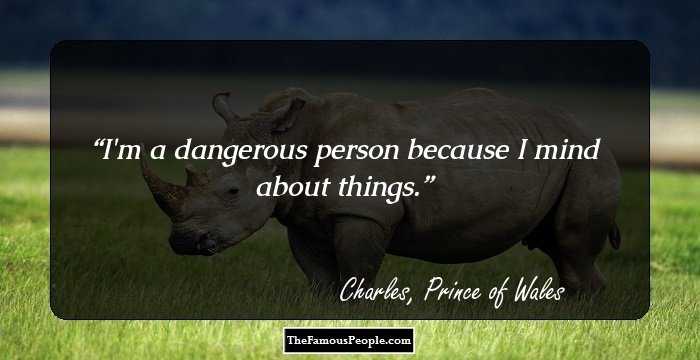 Prince Charles began his military career in the ‘Armed Services’ in 1971. He received his ‘Royal Air Force’ training and was awarded his ‘RAF’ wings at Cranwell in 1971. 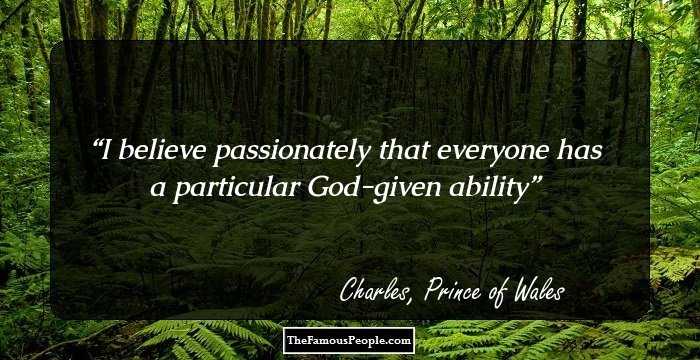 Quotes: Believe, I
As Prince of Wales

In 1976, Prince Charles, along with Frederick John Pervin, founded the ‘Prince's Trust’ to help vulnerable young people. The trust runs a number of training programs, provides mentoring support, and offers financial grants to build the confidence and motivation of vulnerable young people. Over the years, Charles has established 16 other charitable organizations.

He founded the ‘Prince of Wales’s Charitable Fund’ in 1979. It is one of the largest independent foundations in the UK. It supports a wide range of causes with areas of interest in ‘responsible business and enterprise,’ ‘young people and education,’ and ‘global sustainability.’ The foundation has three subsidiary companies, ‘PCF Social Enterprises Ltd’ – a holding company for ‘A. G. Carrick Ltd’ and ‘Duchy Originals Ltd,’ ‘Prince's Charities Events Ltd,’ and ‘Golden Jubilee Events Ltd.’

In addition to his own charities, Prince Charles was a patron of over 350 other charities and organizations. He supports humanitarian projects all over the world, leading to the establishment of the ‘Prince's Charities Canada’ and the ‘Prince Charities Australia.’

Charles made frequent visits to Saudi Arabia in order to promote arms exports for companies, such as ‘BAE Systems.’

He announced that he had opened a new bed and breakfast called ‘The Granary Lodge’ in Caithness, Scotland. The B&B was built on the grounds of ‘The Castle of Mey,’ the former retreat of Charles' grandmother, Queen Elizabeth.

As King of the United Kingdom

King Charles III acceded to the throne on 8 September 2022, at the age of 73, upon the death of his mother, Queen Elizabeth II. 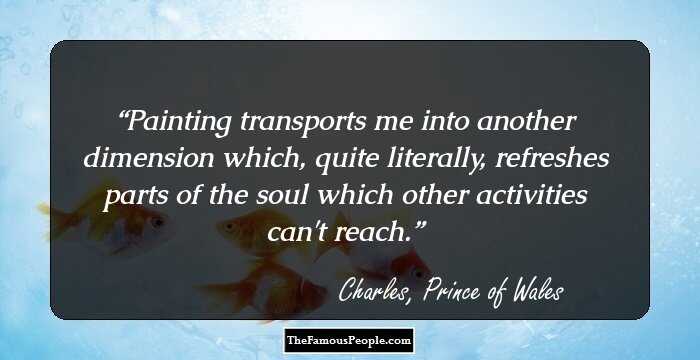 Quotes: Soul
Awards & Achievements
He received the 10th annual ‘Global Environmental Citizen Award’ from the ‘Harvard Medical School's Center for Health’ and the ‘Global Environment’ in 2007.
In 2011, he was presented with the ‘Royal Society for the Protection of Birds Medal’ for his work towards countryside conservation and wild bird protection.
In 2016, he received ‘Londoner of the Decade’ award at ‘The London Evening Standard Progress 1000 Awards.’
Personal Life & Legacy

The marriage, however, ran into trouble as the couple was incompatible on several grounds. Charles was still in contact with a former girlfriend, Camilla Parker Bowles, which further strained the relations between Charles and Diana. The couple got separated in 1992 and divorced in 1996. Diana was killed in an unfortunate car accident in 1997.

Before marrying Princess Diana, Charles had dated her sister.

King Charles III is the oldest person ever to assume the British throne. He became the king at the age of 73.