Prince William, the Duke of Cambridge, is the eldest son of Prince Charles, the Prince of Wales. William happens to be the second in the line of succession to the throne, after his father. William was involved in philanthropy since a very early age and used to spend his gap years doing humanitarian work in Chile and some African countries. Initially, William wanted to be an army officer and underwent training for the same. He successfully finished his course at the Royal Military Academy Sandhurst and was subsequently commissioned as a second lieutenant. Later, as his interest shifted towards Royal Airforce service, William served his country as a Flight Lieutenant. For some time, William took on the full time duties as an Air ambulance pilot at the Eastern Anglian Air Ambulance, for which he went through intense training. Serving his duties as the eldest son of Prince of Wales, William got appointed as the Counsellor of State. He embarked on a Wales tour with his father and sometime later, did a solo tour. He also happens to be an avid philanthropist and has been involved with many organizations to provide healthcare, food and safety to the less privileged. Right before his marriage to Catherine Middleton, he was honoured with the title the Duke of Cambridge, Earl of Strathearn and Baron Carrickfergus. Princess Charlo...
DID WE MISS SOMEONE?
CLICK HERE AND TELL US
WE'LL MAKE SURE
THEY'RE HERE A.S.A.P
Quick Facts

British People
British Men
Eton College
University Of St Andrews
British Royal Family Members
Childhood
Born on 21 June 1982 in London, Prince William is the eldest son of Prince Charles, the heir to the throne, and Diana, the Princess of Wales. His parents used to lovingly call him ‘Wombat’ as a kid, which William hated a lot apparently.
William was severely bruised with the divorce of his parents in 1996 and later when his mother Diana died tragically a year later. He was constantly in the news due to all the right and wrong reasons and hated media attention.
William was excellent at studies and sports and adopted swimming as his favourite pastime. Apart from that he used to spend a lot of time studying, shooting, fishing and skiing. Since his early childhood days, Prince William showed a constant hatred towards paparazzi and the media slowly stopped covering him.
William has always been a well mannered boy who excelled in studies and went to the prestigious Eton College. As a child, he was fond of his grandmother, Queen Elizabeth, who in return, cared a lot about the kid and made sure that the Prince was brought up nicely. 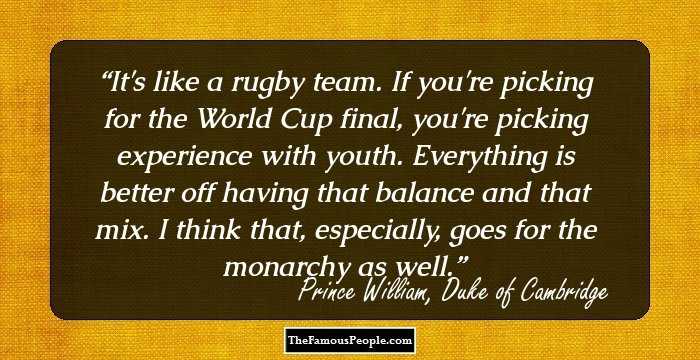 Continue Reading Below
Later Life
Post his graduation from Eton, William visited South America and Africa for philanthropy work. He saw the poor conditions people were living in and started trust funds for them. He came back and started studying geography in St. Andrew’s University of Scotland. By then, he hadn’t decided what to make out of his career.
He then decided to join the military service at the Royal Military Academy Sandhurst as a military cadet. In the Household Cavalry, he got commissioned as the second lieutenant in December 2006. After that, a very intense 4 months training licensed him as a trained Pilot with Royal Air Force and he later joined RAF’s Search and Rescue force.
The first rescue mission prince was involved in was a call of emergency from Liverpool Coastguard, in 2010 where they had the job to rescue a man who had a heart attack. The very next year, they got the responsibility to rescue a cargo ship in the Irish Sea. In 2012, Prince William was graduated to the post of Pilot in Command.
In 2014, Prince took on the full time job as a pilot for East Anglian Air Ambulance, for which William had to undergo training once again for the civil pilot’s license. Prince later donated a massive amount of sum to the Air Ambulance charity despite the position being a paid one. 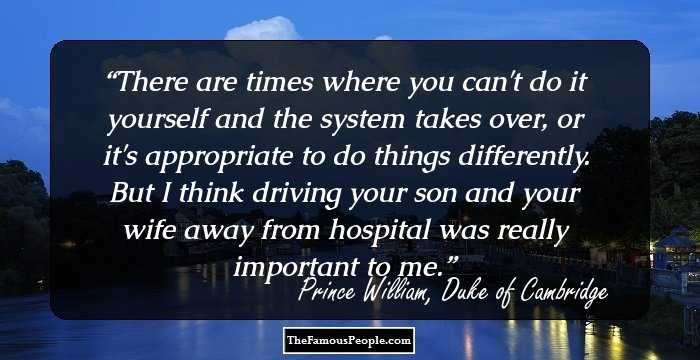 Duties As A Royal
William did internships in land management and banking along with performing his royal duties as a prince, once he graduated. William served as a Counsellor of State at the age of 21 for the first time and on his 21st birthday, he, along with his father embarked on a tour to Wales.
William got his own private office in 2009, gifted to him by his grandmother and he embarked on a tour to Auckland and Wellington on Queen Elizabeth’s behalf. William toured quite a lot in Australia and wondered openly about the prospect of starting his political career there, to which the then Prime Minister of Australia said that it was impossible as William wasn’t an Australian citizen.
In 2011, prince took a tour across Canada and US along with his family and attended Canada Day celebrations and 3 years later in 2014, prince toured around New Zealand and Australia for the Island’s Independence Day. William met Barack Obama, the then president of the US in December 2014 and expressed his concern over wildlife trade.
Personal Life
Prince William’s personal life has been a topic of discussion in the local media and his friendship with his college roommate, Catherine Middleton, was a constant subject of wonder. William became upset with media’s interest over his personal life and asked the paparazzi to stay away from Catherine, indirectly confirming the relationship.
The official announcement about the marriage was made in 2010 and the engagement ceremony took place in Kenya, away from the media and attention. The wedding culminated in Westminster, London in 2011, and just a few hours before the marriage, William was honoured with titles of Duke of Cambridge, Earl of Strathearm and Baron Carrickfergus.
In 2012, the couple welcomed a son, Prince George, to their family.
The couple welcomed their second child, Princess Charlotte, on 2 May 2015.
Prince William happens to be a sports lover and played a major role in bringing the Olympic Games to London in 2012 and was seen in the stadium cheering for his team many times along with his little brother, Harry. 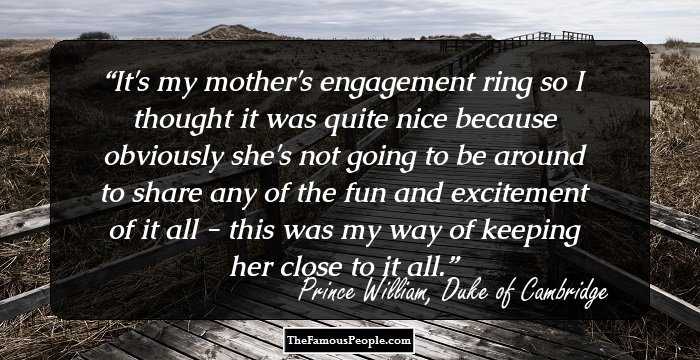 Philanthropy
Prince William is actively in favour of HIV/Aids prevention and spreading awareness about the disease, for which he constantly tours Africa, the continent that is most affected by the disease. Several charities working towards the eradication of the disease receive funds from the prince on constant basis.
At the Royal Marsden Hospital, William worked for two days and generated funds and support from elites of England for the children’s unit of the hospital. Apart from that, several Tsunami affected areas received financial aid from William and his younger brother, Harry.
Prince William also happens to be an essential patron of Tusk Trust that is active in Africa, conserving wildlife and improving the standard of living of people across the continent. Prince also plays polo for charitable causes.

Quotes By Prince William | Quote Of The Day | Top 100 Quotes

See the events in life of Prince William in Chronological Order