Advanced Search
George William Frederick, more commonly known as George III, was one of the most famous kings of the Great Britain. He was known, during and after his reign, for his benevolent, compassionate, and docile nature. He was more learned than his predecessors, and a patron of advancements in science, agriculture, and technology. He had a penchant for collecting objects pertaining to science and mathematics, which are now displayed at London's 'Science Museum.' He earned the nickname ‘Farmer George’ because of the attention he gave to ordinary matters rather than concentrating on political affairs. The name stuck with him when people realized the value of his humility and simplicity, as compared to his pompous son who succeeded him. Along with Prime Minister William Pitt the Younger, he gained popularity amongst his subjects. As a king, he avoided speaking ill to anyone, and is believed to have taken decisions, often considered wrong, to defend his chosen Parliament, rather than establishing his own control. Despite mixed opinions about this king, it is a fact that he is still revered by many across the world. Charles I of En...
4th June In History
DID WE MISS SOMEONE?
CLICK HERE AND TELL US
WE'LL MAKE SURE
THEY'RE HERE A.S.A.P
Quick Facts

Quotes By George III Of The United Kingdom Emperors & Kings

British People
British Men
British Emperors & Kings
British Historical Personalities
Gemini Men
Childhood & Early Life
George III was born George William Frederick on June 4, 1738, in Norfolk House, St James's Square, London, England, to Frederick, Prince of Wales, and Princess Augusta of Saxe-Gotha. His grandfather George II was the king of England, and his brother was Prince Edward.
Prince Frederick and his family settled down in Leicester Square where he and his brother were home-schooled.
Apart from being fluent in German and English, he also knew a lot about the political affairs of the nation. He was also the first person from the Royal family to have learnt all the different branches of science, including chemistry, astronomy, physics, and mathematics. He was also taught the social sciences along with agriculture, commerce, and law.
Other than extensive studies, he was also trained in extra-curricular activities like horse riding, dancing, acting, and fencing.
In 1751, Prince Frederick died, and the young man inherited the title Duke of Edinburgh. Subsequently, King George II was made the new Duke, the Prince of Wales. 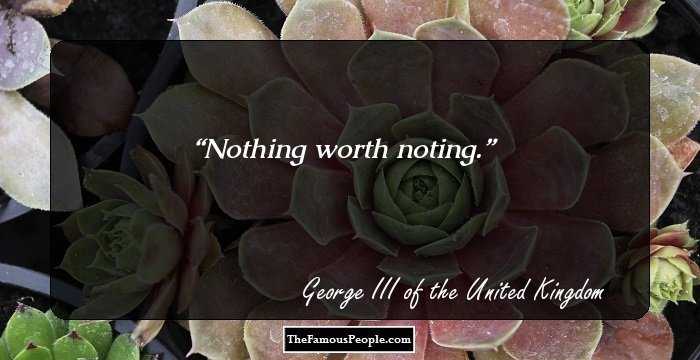 Continue Reading Below
Accession & Reign
In the year 1760, George became the king of England when his grandfather suddenly passed away. The next year, on September 22, George III was coroneted as the royal Head of State.
In 1763, when the king signed the 'Treaty of Paris' with France and Spain, Prime Minister Lord Bute stepped down from office, and George Grenville of the ‘Whig’ political party took over.
The same year, King George III issued the 'Royal Proclamation' which stopped further conquest of American colonies towards the west. This decision was not supported by everyone, mainly the colonists of the northern and southern parts of America.
In 1765, Prime Minister Grenville passed the 'Stamp Act,' earning revenue from all documents that were printed in British-controlled areas of North America. This led to widespread dissent, especially amongst publishers of newspapers, and they protested against this step taken by the prime minister.
An attempt was made by the king of England to thwart Grenville's activities, and the former requested British statesman William Pitt the Elder to become the prime minister. Pitt declined the offer, and Charles Watson, also known as Lord Rockingham, replaced Grenville.
Lord Rockingham was well-advised by George III and William Pitt to remove the 'Stamp Act,' a task which he successfully carried out. However, because of his incapability to govern the country, William Pitt was named the prime minister in 1766. Following this, the king’s popularity with the American citizens increased.
In 1767, the Duke of Grafton Augustus FitzRoy had to replace Pitt, when the latter fell sick, but his duties and position was officially confirmed only the next year.
The Duke of Grafton was later succeeded by Lord Frederick North in 1770. The same year, king's brother Prince Henry married Anne Horton, a widow of lower class.
The marriage was despised by George III, who immediately tried to bring into effect a law that would prohibit members of the royal family from marrying without the permission of the king. Though the law faced initial opposition, even from the king's subordinates, it was finally introduced in 1772 as the 'Royal Marriages Act.'
Continue Reading Below
Lord North brought about several changes, mainly to appease those belonging to the American colonies. He did away with all taxes, except the duty on tea, which according to the king was necessary to levy.
In 1773, in what was deemed an unfortunate incident, a lot of tea was thrown into the sea by the American colonists. Subsequently, Lord North, in consultation with William Pitt, was forced to take harsh steps. He closed down the Port of Boston, and announced that the king would select the members of the Upper House of the Legislature.
This led to protests amongst the colonists, who had made each province a self-governed one, disregarding the power of the king. The protest led to the 'Battle of Concord' and the 'Battle of Lexington' in 1775.
By July 1776, independence was declared in America, accusing George III of having plundered the colonies, causing mayhem. At the 'Battle of Saratoga,' which was fought the following year, British official John Burgoyne was defeated by the colonists.
The 'American War of Independence' continued, and the British government had to incur heavy expenses in order to keep fighting. While the British were victorious at the 'Battle of Guilford Court House' and the 'Battle of Camden,' they lost to the Americans in the 'Siege of Charleston' and the 'Siege of Yorktown.'
In 1781, Lord North stepped down as the prime minister, and the king had no other choice but to concede defeat and grant America its freedom. In the next two years, the 'Treaties of Paris' were signed, and this event marked the end of the 'American War of Independence.'
Initially, Lord Rockingham was appointed the prime minister after Lord North’s resignation. However, following his death within a few months, it was Lord Shelburne who took over as prime minister.
Within a year's time, Lord Shelburne was ousted and William Cavendish, the Duke of Portland, replaced the former as the prime minister. He was assisted by Charles James Fox as the foreign secretary, and Lord North as the home minister.
In 1783, William Pitt the Younger replaced the Duke of Portland as prime minister, owing to several measures taken by the king to remove Fox from office. Pitt became the youngest British statesman ever to become the prime minister of Great Britain.
Continue Reading Below
After the appointment of Pitt, several positive changes were introduced in the country which increased the popularity of the new prime minister and the king. George III was admired for his religious nature and fidelity towards his wife.
Towards the end of the 1780s, George III became mentally ill, and was soon deemed incapable of ruling the nation. There were talks of the Prince of Wales becoming the regent and ruling the country in place of his father. However, before the decision could be taken by the 'House of Commons,' the king’s health improved.
The king continued to be admired by his subjects, especially when he was lenient towards two people who tried to attack him. Soon, there were several other changes in the prime minister's office, but none of the decisions taken by George III had any major significance.
By 1810, the king had become old, and suffered from various ailments, including mental illness. Within the following year, he was no longer capable of performing his royal duties.
It was his son Prince of Wales, George IV, who acted as regent. Under his leadership, the battles against Napoleon were won. 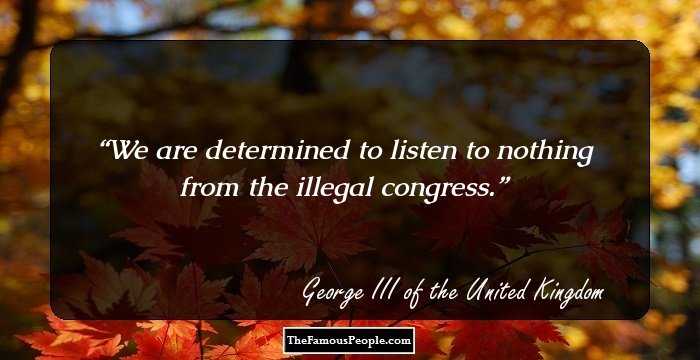 Major Works
Under this famous king’s rule, there was a drastic growth in agricultural production in the nation. He also ensured that constant development took place in industrial and scientific areas. Rural population flourished in Britain, and these people were eventually employed during the Industrial Revolution.
Personal Life & Legacy
On 8 September 1761, King George III got married to Princess Charlotte of Mecklenburg-Strelitz at the ‘Chapel Royal’ in St James's Palace.
The royal couple had 15 children, of whom Princess Amelia and Prince Frederick were his favorite children. The only two sons who ruled England as kings were George IV and William IV.
George III passed away on 29 January 1820 at the Windsor Castle. His wife had died two years prior in 1818. 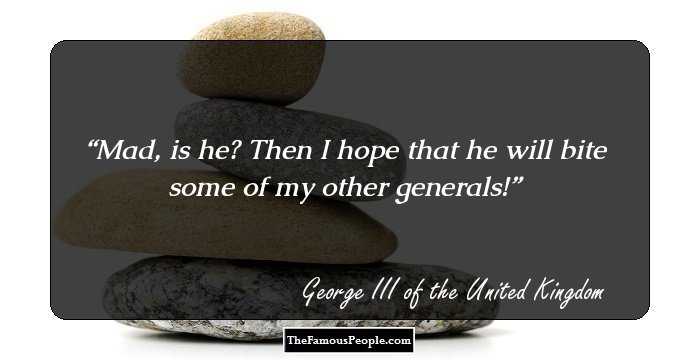 Quotes: War, History
Trivia
This British king was the only one to have never had a concubine, and was known to have been loyal to his wife throughout his life.
George III lived for 81 years and 239 days and reigned for 59 years and 96 days, longer than any of his predecessors and subsequent kings. Queen Victoria and Elizabeth II are the only two successors who outlived and reigned longer than him.