C. P. Scott was a famous British journalist, who served as the editor of the renowned newspaper “The Guardian” for a number of years. After three unsuccessful attempts at the general elections as the candidate of the Liberals, he became the MP for Leigh. As a politician, he fought hard for a number of issues, such as, women’s suffrage, reform of the ‘House of Lords’ and more. Besides being an editor of the ‘Manchester Guardian’, which was later renamed ‘The Guardian’, he became the owner of the newspaper itself, after the death of John Edward Taylor. Apart from a successful career as a journalist, Scott was also a publisher. He brought out some books on politics, and on his experiences with the ‘Manchester Guardian’. Through the newspaper, he fought for the causes he advocated as a politician, and was also keenly interested in further education. This remarkable journalist felt that a newspaper should be responsible and should only bring out true facts, in addition to being accurate. His most famous quote “comment is free, but facts are sacred” gives us a gist of his ideals as a responsible journalist and editor. Continue reading to know more about the life, career and works of this multifaceted personality. Keir Starmer
Political Leaders #4955
Journalists #1596
Publishers #122
Continue Reading Below
DID WE MISS SOMEONE?
CLICK HERE AND TELL US
WE'LL MAKE SURE
THEY'RE HERE A.S.A.P
Quick Facts

British Celebrities
Political Leaders
British Men
Male Leaders
Scorpio Leaders
Childhood & Early Life
Charles Prestwich Scott was born in Bath, England, in Northeast Somerset. He had eight other siblings, and was the eighth child. His father, Russell Scott, a businessman, owned the ‘Manchester Guardian’ newspaper when Charles was born.
He pursued his education at a Unitarian school, Hove House, situated in Brighton and also attended the Clapham Grammar School. In October 1865, he joined Corpus Christi College at Oxford. 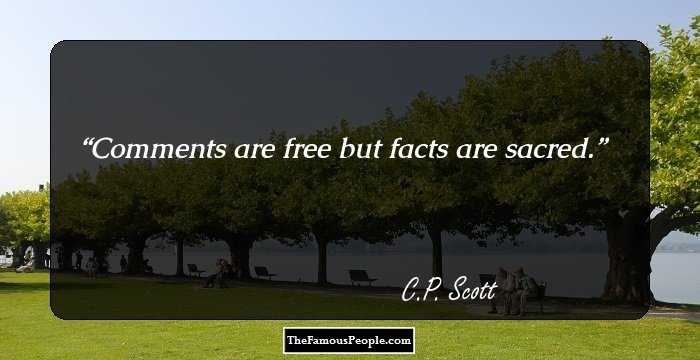 Who Is The Most Popular BTS Member?
Career
After his education at Oxford, Scott left for a Grand Tour of Europe. In 1870, he had the first taste of journalism, when he worked in Edinburgh as an apprentice for “The Scotsman” for a short period of six months.
It was during this time, his uncle John Edward Taylor, who founded ‘Manchester Guardian’ was on the lookout for an editor based in Manchester for the newspaper. In February 1871, this famous journalist became part of “Manchester Guardian”.
Subsequently, he was appointed as its editor on the 1st of January 1872. He was only 25 at this time.
He decided to step into politics in 1886, when he stood for his first general election as a Liberal candidate from the Manchester North East constituency. However, he was unsuccessful.
In the year 1891, he stood for the same seat but was unsuccessful yet again. He did not taste success even in his third attempt in 1892.
This able editor of 'The Guardian' was successful in his fourth attempt and became the MP for Leigh during the 1895 elections.
Scott had a keen interest in higher education and was a trustee of Owens College and a member of its council between 1890 and 1898.
He vehemently opposed the Boer War, which affected his newspaper and his political career and he lost his popularity. But, despite that, in 1900, he won the general elections again.
He retired from the Parliament in 1906, when the Liberals gained a landslide victory. He bought 'Manchester Guardian' from the trustees of the newspaper following the death of John Edward Taylor.
Continue Reading Below
Scott had firm views about the role of a newspaper in the society and said that it must report news in an unbiased and accurate manner. The journalist is renowned for his celebrated quotes like “comment is free, but facts are sacred” and “It is well to be frank; it is even better to be fair” regarding editorial comments.
Though Scott officially quit his post as the editor on July 1, 1929, he continued to be the governing director and spent most of his evenings at the office of ‘The Guardian’. His youngest son, Edward Scott, took over as the editor. When he retired, C. P. Scott was 83 years old.
Major Works
C. P. Scott was the editor of the ‘Manchester Guardian’ from 1872 to 1929, an enviable period of fifty seven and half years, which is a feat unrivalled by anyone else in the world.
He also came out with two other publications ‘The Political Diaries of C. P. Scott’ and ‘C. P. Scott, 1846–1932: The Making of the Manchester Guardian’.
As a responsible politician, he dealt with many issues like the reformation of the House of Lords. He also brought the Women’s Suffrage Bill of Jacob Bright under the spotlight through his newspaper and supported Elizabeth Butler’s Contagious Diseases Act.
Awards & Achievements
In 1930, this talented publisher became a Freeman of the City of Manchester.
Personal Life & Legacy
Scott married Rachel Cook in 1874. She was the daughter of the professor of History at St .Andrews University, John Cook. They had four children, Madeline, Lawrence Prestwich, John Russell and Edward Taylor.
This versatile figure passed away in Manchester, at the age of 86.
Trivia
This journalist’s grandfather propagated the British Unitarian movement along with Joseph Priestley.
In his early years, this prominent British journalist was rejected by Queen’s College and Christ Church College since he did not possess a Church of England Baptist certificate.
This British journalist’s wife is renowned as one of the first students to study at Girton College, previously known as College for Women, Hitchin.
Uncle of this prolific journalist and politician founded the ‘Manchester Guardian’ newspaper in the year 1821.
Recommended Lists:
Media Personalities #3668
Leaders #6578
You May Like

See the events in life of C.P. Scott in Chronological Order