Charles M Schulz was one of the most prolific creative artists of the 20th century. Creator and establisher of the super successful comic strip, Peanuts, he is till date widely recognized as the most influential cartoonists of all time. Schulz had an embedded interest in drawing since he was a child and developed on it while serving the army. After a series of publication of regular one-panel jokes and comic series, he finally hit it big with Peanuts. Though the comic strip opened to a modest response, slowly and gradually it gained popularity so much so that it became a franchise in its own way. With a daily publication of the comic strip in more than 2600 papers in 75 countries, Peanuts recorded an annual income of $1 billion every year. It became the most prized comic series, acting as a trailblazer of the industry. Schulz was known for his hard work and perseverance that he put on every strip. Even till his last day, he did all the work, from conceptualization to drawing on his own without the assistance of anyone. Shel Silverstein
DID WE MISS SOMEONE?
CLICK HERE AND TELL US
WE'LL MAKE SURE
THEY'RE HERE A.S.A.P
Quick Facts

American Celebrities
Cartoonists
American Men
Male Writers
American Writers
Childhood & Early Life
Charles Monroe Schulz was born to Carl Schulz and Dena Halverson in Minnesota, Minneapolis. He was the only child of the couple and spent his growing up years in Saint Paul. His father was a barber and his mother a housewife.
Nicknamed Sparky after a horse in a comic strip by his uncle, young Schulz loved to draw. His drawing of his pet dog Spike even appeared in the Robert Ripley's syndicated panel of ‘Ripley's Believe It or Not!’
He completed his preliminary education from Richards Gordon Elementary School after which he enrolled at the Central High School. At high school, he tended to be a shy and reserved teenager. He later took a correspondence course from Art Instruction, Inc. 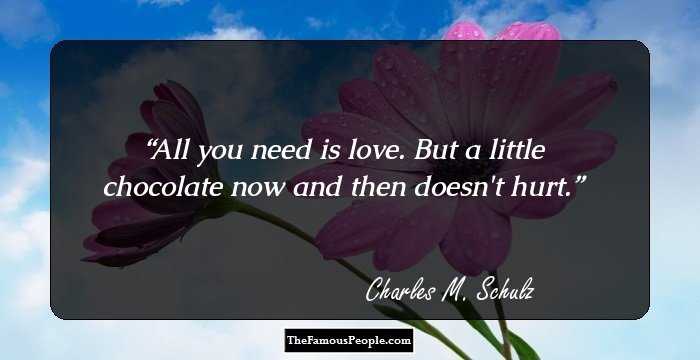 Quotes: You, Love, Need
Continue Reading Below
Career
In 1943, he was conscripted into the United States Army as a staff sergeant. He served as a squad leader on a .50 calibre machine gun team in the 20th Armored Division in Europe.
Two years later, he was relieved from his military duties. Retuning to Minneapolis, he took up the work of lettering for a Roman Catholic magazine, Timeless Topix. He continued in the profile for a year before taking up the job of reviewing and grading lessons submitted by students at his alma mater - Art Instruction, Inc.
While continuing as a reviewer and grader, he did not give up on his passion for drawing and instead worked on it to develop his career as a comic creator.
His first ever published regular cartoon weekly series of one-panel jokes was published as Li’l Folks by the St Paul Pioneer Press from 1947 to 1950. He named the titular character as Charlie Brown, a name which he fervently used in his other comic strips/series as well.
In 1948, he sold a one-panel cartoon to The Saturday Evening Post, which became the first of the seventeen future panels that would be published in the newspaper in the following years.
Despite his attempts to have his comic ‘Li’l Strip’ syndicated through the Newspaper Enterprise Association, he failed to make a mark and thus, the comic series was dropped from the Pioneer Press in 1950.
Unperturbed, he approached the United Feature Syndicate for publishing of one-panel series of ‘Li’l Folk’. Meanwhile, he worked on the comic panel as well and enlarged it to a four panel comic strip rather than one. The newer version appealed to the syndicate and thus marked the first ever appearance of ‘Peanuts’ on October 2, 1950 in seven newspapers.
Though the comic strip received a positive reception, it gained much popularity, admiration and acceptance only with time. Its Sunday page marked it debut on January 6, 1952. Such grand was the positive reception of Peanuts that it not just became the top comic strip in terms of popularity but the most influential as well.
In its 50 years of existence, Peanuts was published in 2600 papers in 75 countries in 21 languages on a daily basis. He drew almost about 18000 comic strips in the golden era of Peanuts.
Continue Reading Below
Such was the popularity and acceptance of Peanuts that it was not just a comic strip but became a franchise in itself. There were merchandises, product endorsements of Peanut which raked huge sum of revenues, generating more than $ 1 billion every year.
The superlative success of his comic strip led him to launch his first book collection of Peanuts strips in July 1952. The debutant book tasted the same success as the strip did in the newspaper thus paving way for more books to be published.
Meanwhile, during the initial years of publication of Peanuts, he came up with a sport-oriented comic strip, ‘It’s Only a Game’. This strip lasted for two years until 1959 due to the increasing demand for Peanuts.
For nine years, from 1956 to 1965, he contributed a single-panel strip featuring teenagers to Youth, in a publication associated with the Church of God.
In 1957 and 1961, he illustrated two volumes of Art Linkletter's ‘Kids Say the Darndest Things’. Furthermore, he illustrated a collection of letters, Dear President Johnson, in 1964.
Peanuts did not limit itself to being just a comic strip and turned on to launch itself in other media as well. In 1965, it launched itself as the first animated TV special ‘A Charlie Brown Christmas’. The success of the debut television show led to the launch of further ones. In 2011, ‘Happiness is a Warm Blanket, Charlie Brown’ was launched.
He retired as an active cartoonist on December 14, 1999, following his depleting health condition – he was diagnosed with colon cancer, which forbid him to read or see. 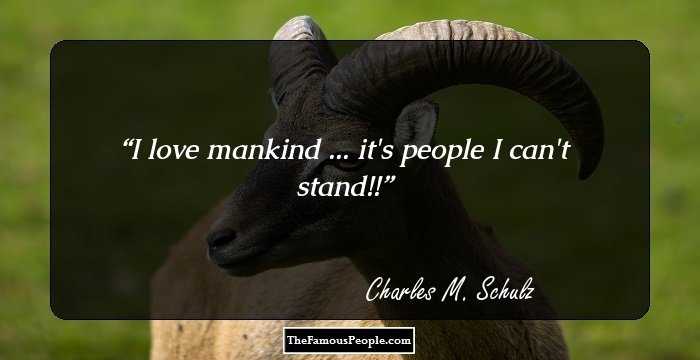 Quotes: Love, I
Awards & Achievements
In his lifetime, he was the proud recipient of numerous awards including the National Cartoonists Society's Humor Comic Strip Award, Society's Elzie Segar Award, Reuben Award which he won twice, Milton Caniff Lifetime Achievement Award and Silver Buffalo Award.
Continue Reading Below
In 1969, he was honoured with the naming of the Apollo 10 command module Charlie Brown, and lunar module Snoopy, after his Peanut characters.
In 1974, he served as the Grand Marshal of the Rose Parade in Pasadena, California.
In 1978, he was named International Cartoonist of the Year.
In 1990, he was named France's Commander of Arts and Letters, one of the country's highest awards for excellence in the arts.
For his outstanding contribution to the game of hockey, he was awarded the Lester Patrick Trophy in 1981. Later in 1993, he was inducted into the United States Hockey Hall of Fame.
In 1996, he received a star on the Hollywood Walk of Fame.
Posthumously, he was awarded the prestigious Congressional Gold Medal. In 2007, he was inducted into the United States Figure Skating Hall of Fame
Personal Life & Legacy
He relocated to Colorado Spring, Colorado in 1951. The wedding bells for him rang the same year as he married Joyce Halverson. The couple was blessed with four children. They adopted a daughter Meredith Hodges.
The family shifted to Minneapolis in 1958 and later to Sebastopol, California. However, his stay in Sebastopol was short lived as he further relocated to Santa Rose, California, in 1969 where he spent the rest of his life.
Continue Reading Below
He divorced Halverson in 1972 and married Jean Forsyth Clyde in 1973. The two remained married until his death.
In 1980, he experienced tremors in his body due to which he had to hold his wrist to draw. However, despite the deteriorating health condition, he did not give up on drawing the comic strips and refused assistance as well.
In 1981, he underwent a heart bypass surgery. His health continued to fall and in 1999, he suffered from several small strokes along with blocked aorta.
Following his depleting health condition and sufferance from colon cancer, he breathed his last in his sleep on February 12, 2000. He was buried at the Pleasant Hills Cemetery in Sebastopol, California.
A day after his death, the last original Peanuts strip was published thus validating his prediction of the strip outliving him. His request for authentication of Peanuts characters to remain as they were and not be included in any other comic strip based on them was approved by United Features.
Till date, honouring his wishes, United Features syndicates reruns of the strip to newspapers. Only once on May 27, 2000, to honor the legendary cartoonist that he was and his strip, other cartoonists incorporated the characters of Peanuts into their comic strips.
There are numerous airports, malls, statues and museums that have been named after him. 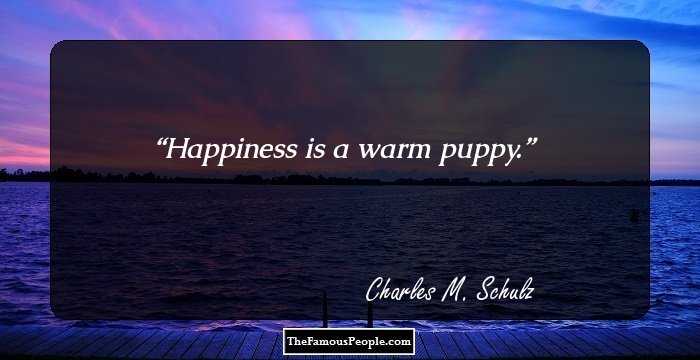 Quotes: Happiness
Trivia
This American cartoonist and creator of Peanuts comic strip despised the title of the comic strip till his dying day and wanted it to be instead called, ‘Li’l Folks’.

See the events in life of Charles M. Schulz in Chronological Order