Advanced Search
Gary Larson is a retired American cartoonist, best known for his cartoons published under the title ‘The Far Side’. Through his cartoons he generally discussed unlikely events, bizarre catastrophes and other social scenarios through an anthropomorphic perspective of the world. His cartoons involved nature and animals to a great extent. In the fifteen years beginning from 1980, this comic strip has been syndicated and published in more than 1900 Daily and Sunday Weekly newspapers around the world. Gary Larson retired from his profession at a time when he felt that the discussed themes were getting repetitive, and that would lead to his cartoons to lose its value. Other than his cartoon career, Gary Larson has worked on publishing books based on his cartoons and has also produced films based on the same. He is extremely protective of his work and thus none of his comics are available online or for public viewing as he regards his work as personal. On a personal front, he has stated that he is a strict environmentalist and that wildlife protection was his top priority. Jeff Kinney
DID WE MISS SOMEONE?
CLICK HERE AND TELL US
WE'LL MAKE SURE
THEY'RE HERE A.S.A.P
Quick Facts

American People
American Men
Male Cartoonists
American Cartoonists
Male Media Personalities
Childhood & Early Life
Gary Larson was born on 14 August 1950, at Washington. His father Verner was a salesman and his mother Doris was a secretary by profession. He has an older brother named Dan.
he grew up in Washington. In his childhood, he learnt to play instruments like the banjo and guitar.
He completed his school education at the Curtis Senior High School and later graduated with a degree in communication from the Washington State University in 1972. 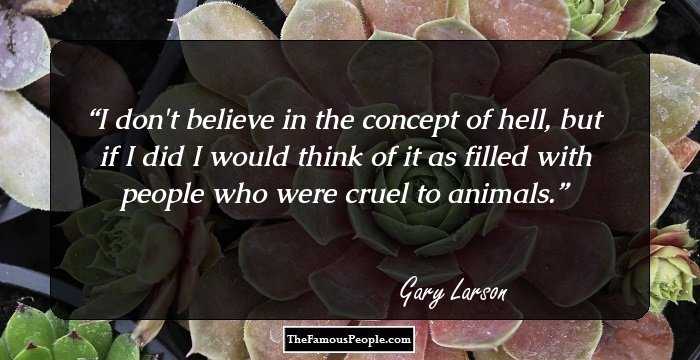 Quotes: Think, Believe, I
Continue Reading Below
Career
Gary Larson’s initial aim was to take up a career in writing TV commercials. However, after his graduation he and his friend began performing music for three years. Amongst the duo, he used to play the instruments banjo and guitar while his friend used to play the keyboard and trombone.
He later found work at a music store in Washington, but soon realized that it was not his area of interest and subsequently turned to drawing.
In 1976, he drew and submitted a few of his cartoons to magazine Pacific Search. His work was appreciated and this marked the beginning of his career as a cartoonist. In 1979 he began working with newspaper The Seattle Times, which published his drawing weekly under the title ‘Nature’s Way’.
Initially, in order to sustain he had to work as an investigator for the Local Humane Society along with his drawing projects. However, in due course he decided to concentrate on drawing rather than following other occupations and decided to sell his comic strips to other newspapers.
In 1979, while at a vacation, Gary Larson approached the newspaper ‘San Francisco Chronicle’ with his cartoons from ‘Nature’s Way’. The newspaper signed a distribution contract with him and in January 1980, they began publishing the cartoon strip with a new name ‘The Far Side’. It was around the same time that ‘The Seattle Times’ stopped printing his cartoons.
‘The Far Side’ was published for fourteen more years in many more newspapers until Gary Larson’s retirement from the profession in 1995. The ‘Far Side’ cartoons primarily focused on surreal scenarios and attempted to compare the behaviour of humans with animals. His cartoons were also being extensively used on greeting cards until 2009.
His cartoons were the base to create television animated films titled ‘Tales from the Far Side’ (1994) and ‘Tales from the Far Side II’ (1998) for CBS television. Both films were screened at international film festivals and ‘Tales from the Far Side’ went on to win a Grand Prix award at the Annecy International Animated Film Festival.
In 1998, Gary Larson published his first illustrated book titled ‘There's a Hair in My Dirt! : A Worm's Story’. The book explained science through weird stories and sketches.This book was published by HarperCollins and became a New York Times Best Seller in May 1998.
Post his retirement as a cartoonist, he is known to take up assignments for magazines and promotional art for the Far Side related merchandise.
Continue Reading Below
Since publishing his first Far Side cartoon book in 1982, he has produced 22 Far Side books till 2003. All his books were listed on The New York Times Best Seller list. His last publication was ‘The Complete Far Side: 1980–1994’ that was released in 2003.
In 2003, he worked on a cover for ‘The New Yorker’ as he considered it a celebrated opportunity.
Gary Larson has also lent his voice for an episode of the 21st season of animated sitcom ‘The Simpsons’, which was aired in 2010. 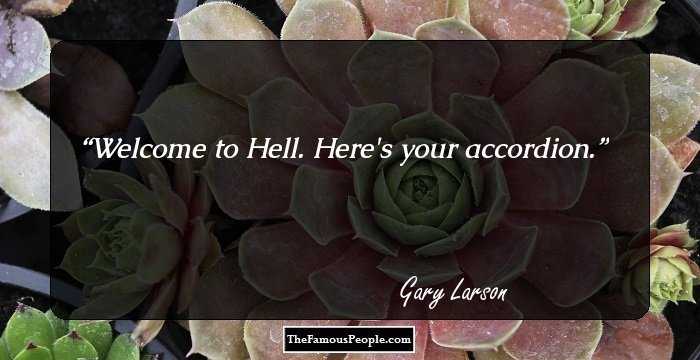 Major Works
Gary Larson is a well-known cartoonist and is best known for his work on the comic strip titled ‘Nature’s Way’ that were later renamed ‘The Far Side’. His work as a cartoonist has earned him much recognition and accolades.
Awards & Achievements
He received the Newspaper Panel Cartoon Award from the National Cartoonists Society twice in his career, in 1985 and 1988.
He won the National Cartoonists Society's Reuben Award in 1990 and once again in 1994. 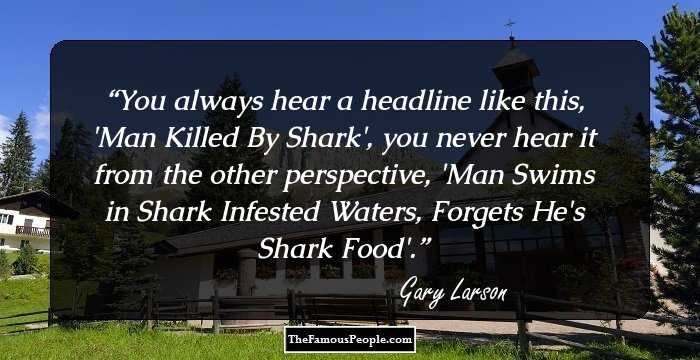 Quotes: You, Never, Like
Personal Life & Legacy
In 1987 Gary Larson married anthropologist Toni Carmichael. She was his business manager at the beginning of their relationship.
Trivia
In 1989 a new insect species ‘Strigiphilus garylarsoni’ was named after him. Later a rainforest butterfly was also named after him as ‘Serratoterga larsoni’. The Garylarsonus beetle is also named after him.

Quotes By Gary Larson | Quote Of The Day | Top 100 Quotes

See the events in life of Gary Larson in Chronological Order