Caryl Churchill is an English dramatist and women’s rights activist, known for her unconventional plays representing feminist themes. She is one of the most influential writers of the world whose writing has a profound impact over people of all ages. Her deep love for writing developed during her graduation years at the Oxford University and this passion increased over the time. Her career started as a radio dramatist and later she wrote for television plays. She was quite successful in her radio plays which presented a sense of responsibility mixed with subtle humor. But it was the theatre which helped her realize her full potential as the audience was able to imagine and recreate in their own minds the story she displayed on stage with sounds and actions. Her belief in women’s power and views about gender inequalities combined with other subjects like traditional bondages and professional politics, to create a realistic caricature of the society. She created awareness by presenting to the orthodox society insights of their own shabby and frail ideologies which should be abolished. Throughout her theatrical journey, she wrote numerous noteworthy plays and was able to rightfully claim her name in the list of people who brought about significant changes in the society through their innovative writing. British People
Women's Rights Activists
British Women
Tall Celebrities
Tall Female Celebrities
Childhood & Early Life
She was born on September 3, 1938 in London, England to Robert Churchill, a political cartoonist and Jan Churchill, a fashion model. She was the only child of her parents.
When she was 10 years old, her family moved to Montreal, Canada. She did her schooling from the Trafalgar School for Girls.
In 1957, she returned to England for her college studies. In 1960, she graduated with a B.A. Degree in English Literature from Lady Margaret Hall, a women’s college of the prestigious Oxford University.
During her college years, she developed a keen interest in dramatics and also wrote some plays which were performed by the student drama groups of the university.
She wrote several plays such as ‘Downstairs’ (1958), ‘You’ve No Need to be Frightened’ and ‘Having a Wonderful Time’ (1960) while she was in the college. 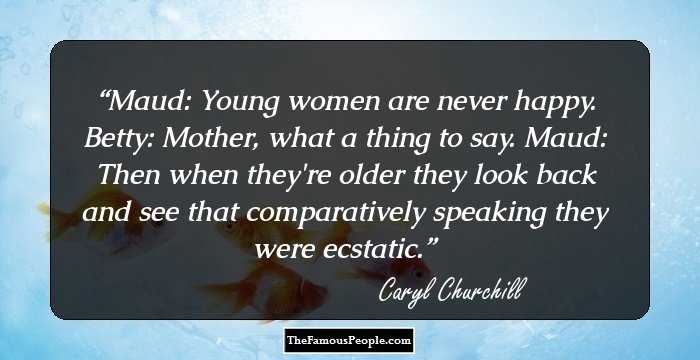 Quotes: Never, Women, Young
Continue Reading Below
You May Like

The Sexiest Men Of 2020, Ranked
Career
After graduating from Oxford University, she started writing short radio dramas for BBC radio which were successful in capturing the attention of listeners. Some of them were ‘The Ants’ (1962), ‘Not, Not, Not, Not Enough Oxygen’ (1971) and ‘Schreber’s Nervous Illness’ (1972).
After her radio plays, she decided to write television plays for BBC which were not much appreciated as compared to her radio plays, although, her TV play ‘The Judge’s Wife’ in 1973 and ‘Shorts’ in 1990 were quite successful.
In 1972, she wrote her first professional play for the theatre, ‘Owners’, which premiered at London’s Royal Court Theatre. She became the resident dramatist of Royal Court in 1974.
In the 1980s, she worked with many theatre companies such as Joint Stock and Monstrous Regiment producing some of her finest works like ‘Cloud Nine’ and ‘A Mouthful of Birds’.
In 2000, she wrote a play titled ‘Far Away’ based on the premise of a world in which everything in nature is at war. It premiered at the Royal Court under the well-known director Stephen Daldry. It features the story of a girl who is afraid of the duality created by this new world and cannot think of anyone who is not a part of this war, not even nature.
In 2009, her 10-minute play ‘Seven Jewish Children: A Play for Gaza’ was caught up in political controversy for its portrayal of Israelis.
In 2012, her play ‘Love and Information’ was enacted in the Royal Court and received critical as well as popular acclaim. It deals with the concept of modern day consciousness and the need of human bonding and intimacy. 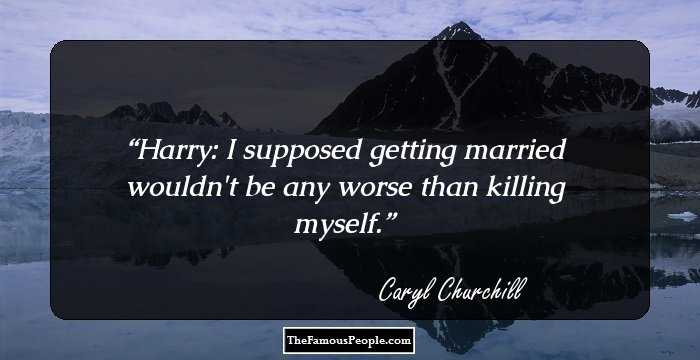 Quotes: I
Major Works
Her 1979 play, ‘Cloud Nine’, is considered a mature and sensible piece of work. It explores the complex relationships prevailing in the society and their consequences. It deals with the mature subjects of attraction, homosexuality and bisexuality among the central characters of the play.
Continue Reading Below
Her 1982 play, ‘Top Girls’, is a notable play in her career which gained her immense appreciation from the critics. It focuses on the struggle and sacrifices of a woman to achieve success in this male dominated society. It gives us a satirical view of the suffering of a woman in different ways in our society.
Her 1987 play, ‘Serious Money’, is a remarkable play, known for being largely written in rhyming couplets. It is a satirical representation of the business world set in the backdrop of British stock market.
Awards & Achievements
In 1958, she won her first award for her first play, ‘Downstairs’, at the Sunday Times National Union of Students Drama Festival. She wrote it while studying at the university.
In 1961, she was honored with the Richard Hillary Memorial Prize.
In 1974, she became the Resident Dramatist of the Royal Court Theatre—the first woman to do so.
She won the prestigious Obie Award for Playwriting consecutively in 1981 for ‘Cloud Nine’ and in 1982 for ‘Top Girls’.
In 1987, she won the Evening Standard Award for the Best Comedy of the year and Laurence Oliver/ BBC Award for Best New Play for her distinguished piece of work ‘Serious Money’.
In 2010, she was inducted in the American Theatre Hall of Fame. 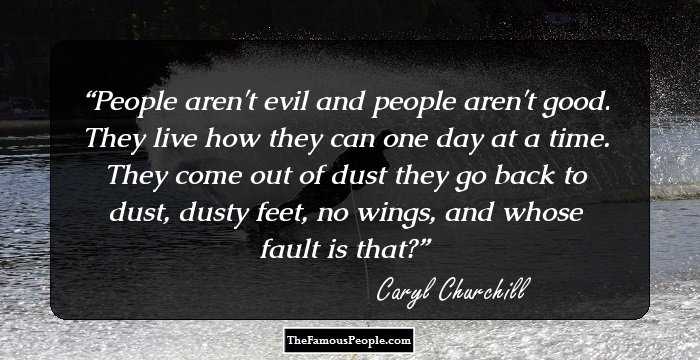 Quotes: Time
Personal Life & Legacy
In 1961, she married David Harter, a barrister. The couple has three sons, namely, Joe, Paul and Rick. Her husband was very supportive and gave up his lucrative private law practice so that she could spend ample time in writing.
Recommended Lists:
Activists #608
You May Like

Quotes By Caryl Churchill | Quote Of The Day | Top 100 Quotes

See the events in life of Caryl Churchill in Chronological Order